It will be four weeks since our last Saturday afternoon home game at Deepdale, so football makes a welcome return to PR1 as we entertain Birmingham City this weekend.

It’s a very different Blues side to the one we faced back in September, with Steve Cotterill having taken the reigns at St Andrews and his side have been in fine form of late, their defeat to Derby County last weekend, there first in a few games.

Back in Preston, manager Alex Neil is starting to have options available to him, with players beginning to end their spells out of the side through injury, meaning changes are available, should the boss wish to make them.

And this is the first home game since the transfer window allowed players signed in January to be available, so there could be opportunities for debutants as well, so all the more reason to get down and support a side who currently sit just two points off the Play-Off places at the top end of the Championship table.

Click here for our statistical analysis of the match

Click here as Callum Robinson looks ahead to the match

Click here for Tom Clarke’s preview of the game

Click here for details of this Saturday’s matchday programme

Ben Davies scored his first goal for Preston North End, but the Lilywhites were denied all three points by Sam Gallagher’s second half equaliser at Deepdale.

Davies, fired home from close range after Paul Gallagher’s cross had been headed back across his own six yard box by Birmingham City skipper Harlee Dean 17 minutes in, only for Jacques Maghoma to win the ball high up the pitch, giving Gallagher the easiest of finishes into an empty net from 18 yards out just after the hour mark.

Manager Alex Neil was without Ben Pearson through injury, but he was able to welcome back Paul Huntington from injury, and Louis Moult was on the bench for the first time, alongside the returning Josh Earl ,back after almost three months out with a knee injury.

The visitors got off to the brighter start and the warning signs were there for PNE in the opening stages when Gallagher collected with his back to goal, was allowed to turn and fired low, only for Chris Maxwell’s back leg to get something on the ball and divert it wide of the right hand post.

The whites started to get a foothold in the game and from a cleverly worked corner from the left,delivered by Paul Gallagher, Tom Barkhuizen found space on the edge of the box to volley the cross goalwards, the ball taking a deflection off Jonathan Grounds to take it behind for another corner.

The goal came when the ball was fed out to Gallagher 45 yards out in a right hand channel; he showed his usual high quality to whip a ball into the left hand edge of the six yards box where Dean headed the ball back across goal where Davies gleefully poked the ball past a despairing hand from David Stockdale in the Blues goal, for his first PNE goal and the second of his career.

The game was without real clear cut chances for much of the rest of the first half, but it was Steve Cotterill’s side who had the better possession, without really creating any clear cut opportunities to test Maxwell.

So when the equaliser came, whilst it was not necessarily against the run of play, it was not from a piece of play that cut the home side’s defence open. A backwards pass left Maxwell and the defence exposed to a high press and Maghoma nipped in, collected and passed sideways from the right hand corner of the penalty area, finding Sam Gallagher, who took a second to see the space open for him to pass the ball into the empty net from the edge of the box.

Neither side wanted to settle for a point and Earl, who came on at half-time, after goalscorer Davies was forced off with an injury, was needed to make a vital block on the line after a corner from Jeremie Boga on the right was poked goalwards.

Moult was given his first introduction, with Jordan Hugill forced off with concussion, after a clash of heads with Dean, and the No.21’s link up play almost brought at winner in the 89th minute. The ball was played forward into the transfer window signing; he fed the ball out wide to fellow substitute Alan Browne in the right hand corner of the penalty area and he drove a shot towards the bottom corner, but Stockdale got down well to make a smart save as the game ended all-square.

Normal matchday prices apply for Saturday afternoon’s clash with Steve Cotterill’s Birmingham City at Deepdale, with tickets on general sale for all areas. 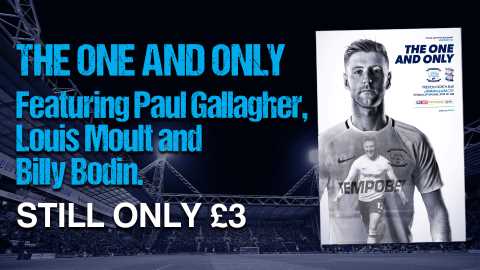 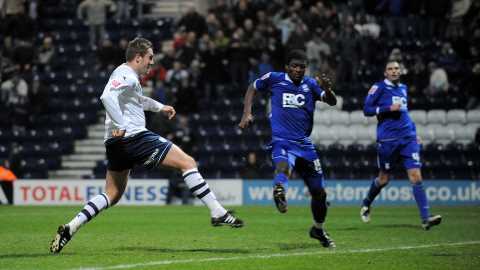 Away end tickets will be available on the afternoon, with no increases for matchday purchases. Visiting Blues supporters can buy from the away ticket office next to the Bill Shankly Kop on Lowthorpe Road, with cash and card payments accepted.