Jim Gannon's men provide the opposition as Alex Neil will take to the touchline for the first time as Preston North End manager, having taken a watching brief in the opening pre-season game at Bamber Bridge last Friday night, where the Lilywhites ran out 7-0 winners.

The team go into the game on the back of a full week of training over in Ireland and begin a run of four games in eight days, as they step up their fitness regime with the aim of being ready for the first game of the season against Sheffield Wednesday, at Deepdale in three weeks' time.

The new gaffer will only have Tom Clarke, Declan Rudd and Josh Harrop likely to be unavailable, the latter two only short term, whilst Calum Woods could be set for his first run out for 12 months following his cruciate injury suffered at Oldham last pre-season.

Admission to this game is pay on the day, with prices as follows: Adults £10, concessions £7, six to 17-year-olds £4 and U6s free when accompanied by a paying adult.

Please be aware that there is no parking at the ground, there is limited parking in the surrounding roads and paid car parking at either end of, and behind, Castle Street in Edgeley.

iFollow's premium service will once again be broadcasting full live coverage with former PNE midfielder Paul McKenna joining Jonathan Breeze on air from the ground from 2.45pm for uninterrupted video coverage and commentary.

Using the new match centre you will also be able to follow all the action from our match service, plus in the same place a full 90 minute re-run will be available just a few hours after the final whistle!

For any matchday problems with iFollow subscriptions, supporters are advised to use the speech bubble at the bottom right corner of the iFollow page to chat directly to a customer service assistant or alternatively you can email ifollow@efl.com.

First half goals from Callum Robinson and Tom Barkhuizen gave Alex Neil’s side the victory over Stockport County at Edgeley Park. 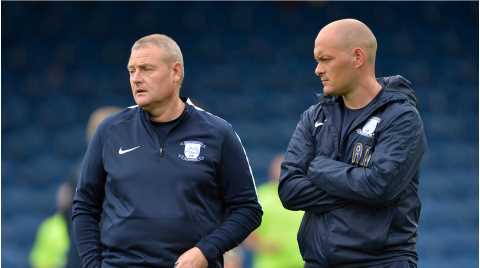 Neil On Positive End To A Great Week

The Lilywhites came from behind to make it two wins from two in pre-season, as the squad was again split, to give 21 players 45 minutes each – goalkeeper Chris Maxwell the only one completing the full 90.

The Hatters took a surprise lead, against the run of play, in a first half dictated by the visitors, Jason Oswell firing home powerfully off the inside of the right hand post from 12 yards out.

However, there was a quick response from Neil’s men, with Robinson – who had good chances to have already had two goals – calmly converting Barkhuizen’s excellent pull back from the right.

And five minutes before half-time the No.29 put PNE in front, slamming home with power and precision from 15 yards after the ball had been threaded through to him in a right hand channel.

The National League North side had former PNE youngster Ben Hinchliffe in goal and Jim Gannon’s No.1 was a busy man in the opening period. The pace of Barkhuizen was a constant threat and his early ball was well cut out by home skipper Ali Winter with Robinson waiting to pounce.

Hinchliffe did well to grab Stevie May’s 20 yard curling effort at the second attempt, after the ball seemed to have squirmed through him and then the stopper made a fine fingertip save to push Robinson’s powerful effort over the bar after May had threaded him through. 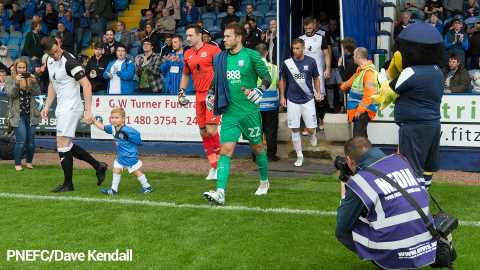 The No.37 should have perhaps opened the scoring on 20 minutes when Barkhuizen again showed a clean pair of heals to the County defence, down the right hand side, before cleverly pulling the ball back for May. The Scottish forward’s hard low effort was well blocked, but fell nicely for Robinson, only for the former Villa man to drag his effort wide of the left hand upright from 12 yards out.

Despite PNE dominating possession and chances, it was Stockport who took the lead on 27 minutes. Darren Stephenson did well with some fast feet in the box to draw a tackle, which saw the ball ricochet kindly into the path of Oswell 15 yards out and he slammed the ball with his right foot into the top right hand corner off the inside of the post.

The lead only lasted seven minutes though, as Ben Pringle played a cross-field ball from left to right to again free Barkhuizen. He drove to the byline before a reverse ball to Robinson, who this time slotted neatly into the bottom left hand corner of the goal.

And the navy blue clad North End side had the deserved lead five minutes before the interval as Robinson collected the ball in the middle of the park and slid a ball inside the last defender, for Barkhuizen to collect and smash an unstoppable drive past Hinchliffe and into the top left hand corner from 15 yards out. 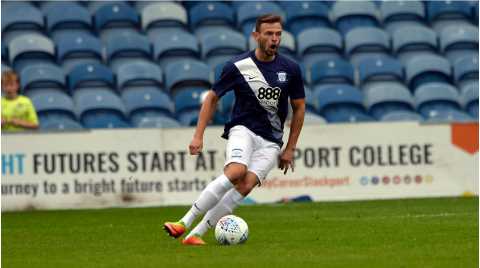 The ten outfield players were all changed at the break by Neil, who was joined on the touchline by the newest member of his coaching staff, Frankie McAvoy, who had joined the same morning.

The home side also made three changes, but also changed their formation to a 3-5-2 and this meant it was much harder for the visitors to play through their opposition in the second period, however, chances still flowed.

Melle Meulensteen almost added to his goal in the Bamber Bridge fixture as a dipping cross from the right nearly bamboozled the Hatters’ substitute keeper Ian Ormson, who just managed to scrambled backwards to tip the ball out of the top left hand corner and over the bar just after the hour mark.

In the closing stages Meulensteen was again involved, freeing an overlapping run from Marnick Vermijl down the right. The Belgian’s clever cut back found an unmarked Daryl Horgan on the edge of the ‘D’. The Irishman steadied himself, but with a crowd of players in front of him, the No.7 could not keep his shot down.

Into the final minute and Alan Browne found himself in on goal, forcing Ormson into a fine low save from a driven effort from the right hand corner of the box. The ball came back to the Irish midfielder, but he screwed his second attempt wide with the final chance of the game.

Ticket details for PNE's pre-season friendlies against Stockport County and Fleetwood Town have now been confirmed.

North End take on County on Saturday 15th July in their second pre-season friendly of the summer, with the Fleetwood Town clash coming at the end of the month, on Friday 28th July.

Ticket details for both games are as follows.

Admission to this game is pay on the day, with prices as follows:

Please be aware that there is no parking at the ground, there is limited parking in the surrounding roads and paid car parking at either end of, and behind, Castle Street in Edgeley.

Tickets for the final pre-season game of the summer are now on sale.

Prices for this game are as follows:

There are five pairs of wheelchair and carer tickets priced as per the seating prices above, with the carer provided free of charge.

Ambulant disabled supporters pay the relevant price above and the carer ticket free of charge.