Saturday sees the Lilywhites make their second long away trip of the week as Alex Neil makes his first return to Carrow Road to take on Norwich City.

The Lilywhites picked up a well-deserved victory on the road at Ashton Gate on Tuesday night and with players having returned from injury, will be full of confidence that they can double their points tally for the week against the Canaries.

Daniel Farke’s men suffered a midweek reversal to Nottingham Forest, but will be looking to return to winning ways against North End, so it will be another difficult game for the whites on the road.

Last season saw PNE pick up the three points in East Anglia, with Alex Baptiste’s second half header enough to pick up the win against what was then Alex Neil’s Canaries.

Click here for an interview with manager Alex Neil

Click here as we speak to defender Callum Woods

Click here to read Daniel Farke’s thoughts on the game

Tom Barkhuizen poached a close range equaliser at Carrow Road, where the Lilywhites were unlucky to only come away with a point from an excellent away performance.

The forward was on hand to poke home from inside the six yard box, after Paul Huntington had powerfully headed Paul Gallagher’s inswinging second half corner goalwards.

This was no more than Ale Neil’s side deserved, levelling up James Maddison’s well-taken first half free kick, but the visitors headed back up to Lancashire feeling they had done enough to make it six points from two long away trips in the space of a few days, rather than the four that they did.

The North End manager, on his first return to Carrow Road since his spell as manager of the Canaries, was forced into two changes to the side that was victorious at Bristol City a few days earlier; Stephy Mavididi missing out through injury and Ben Pearson suspended, Alan Browne and Callum Robinson coming into the side.

The first half of the opening period saw the two sides seemingly feeling their way into the game, but it broke alive at the mid-point when right back Darnell Fisher was needed to make an unbelievable block, denying Josh Murphy when there was only the defender stood between the attacker and the goal. The Norwich man had broken the offside trap and rounded Chris Maxwell before bearing down on goal, until North End’s No.14 got in the way to make a vital interception.

The opening goal came on 34 minutes after a free kick was awarded on the left hand corner of the penalty area, harshly given against Fisher for what seemed a good challenge on former Blackpool midfielder Wes Hoolahan. However, it was awarded and Maddison stepped up and curled the dead ball it into the top right hand corner of Chris Maxwell’s goal.

The goal however sparked a sustained spell of pressure from the Lilywhites and they were left scratching their heads as to how they were not at least level at the break.

Firstly, four minutes after the goal, a cross from Robinson was delivered to the back post; it was headed down by Jordan Hugill, and then flicked up and acrobatically kicked over his head by Browne, the ball crashing off the bar and being cleared for a corner. An inch lower and the Irishman would have wrapped up the goal of the season less than half the way through the campaign!

Shortly after Barkhuizen went close, heading wide at the back post from Browne’s cross from the left after another sustained attack from the Lilywhites. It was an excellent ball in and the No.29 rose and powered the ball, which was curving towards the goal, but not in time to beat the left hand upright.

It was all North End as the half drew to a close, Browne saw a shot blocked on the line and Barkhuizen was denied by Christoph Zimmermann – as it was wave after wave of attack from the visitors, who were delighted when Tim Robinson blew his whistle to end the barrage.

The second half started competitively, Ben Davies making a fine block to deny Wes Hoolahan, who had burst into the box, but at the other end Robinson and Gallagher both carved out opportunities inside the opening ten minutes of the half.

Angus Gunn had to be alert just after the hour mark as Tom Barkhuizen burst around the back of the full back onto Gallagher’s through ball, but the stopper – on loan from Manchester City – came out quickly and denied the pacy wing man.

Moments later Calum Woods was the man with a real chance to level up and he found himself unmarked six yards out as Robinson crossed from the left, but the No.15 headed downwards, but it was also straight at Gunn, who gratefully gathered when he perhaps expected to see the net bulge.

Hugill forced a corner with 22 minutes to go after it looked like Zimmermann might bring down the striker for a penalty, but the equalising goal was finally to come from the resulting corner.

Gallagher put a superb ball in from the right to the penalty spot to where Huntington made a run and headed powerfully goalwards and Barkhuizen was there to tap home from close range with a fantastic little touch two yards out, two defenders on the line and the Gunn all flat-footed and unable to do anything to prevent what was a deserved goal for the visitors’ efforts, coming on 70 minutes. 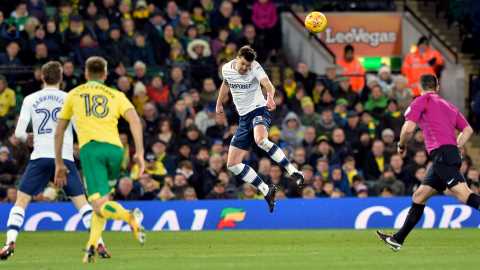 ‘The Performance Is The Positive’ Says Paul Huntington251117

With 12 minutes to go North End should perhaps have been given a penalty when Jordan Hugill was brought down by Zimmermann a yard inside the box, the German having come through the back of the striker, but referee Robinson, who got very little wrong, with a good performance decided that the defender had got a foot on the ball.

After an injury to an assistant referee with ten minutes to go, a huge delay ensued, which eventually meant that at least 12 minutes was to be added on at the end and with a couple of injuries within that period – caused by the delay and the cooling conditions – it would actually turn out to be 15.

In the seventh minute of that time there was a great chance for North End to win the game. It came when Robinson – who was excellent on his return to the starting XI - sent Barkhuizen clean through on goal, one on one with keeper Gunn, however, the ball seemed to take a bad bobble and came off the No.29’s shin, allowing time for the Norwich custodian to come out and make a fine save at the feet of the goalscorer.

Even in the closing stages, it was the team in white who continued to do the pressing, with Daniel Farke’s men desperate to keep the ball clear of the PNE frontline, but they could not force the winner and had to settle for a point, making it four out of six in a week where they and the supporters had done a near 1,000-mile trek.

Tickets for PNE's trip to face Norwich City at Carrow Road this weekend, whilst the Canaries have now gone back on their earlier assertions and will sell on the day to Lilywhites supporters. 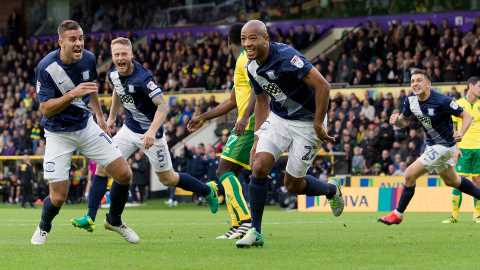 Tickets can be purchased online at MyPNE.Com, by calling 0344 856 1966 or in person from the ticket office and will be available online until 1pm on Friday 24th November and in person at Deepdale until 4pm on Friday.

Those wanting to pay on the day, will need to come to go to the Norwich City ticket office in the South Stand from around 1pm. Ticket sales will be by cash only. 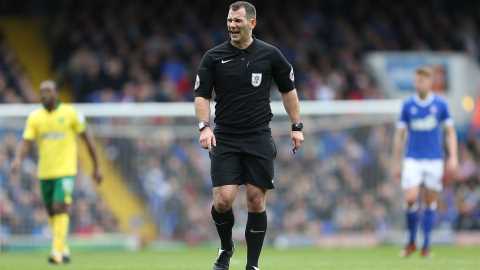 Coach travel is also available and is priced at £25 per person. Coaches will depart Deepdale and Leyland at 8am on Saturday morning. 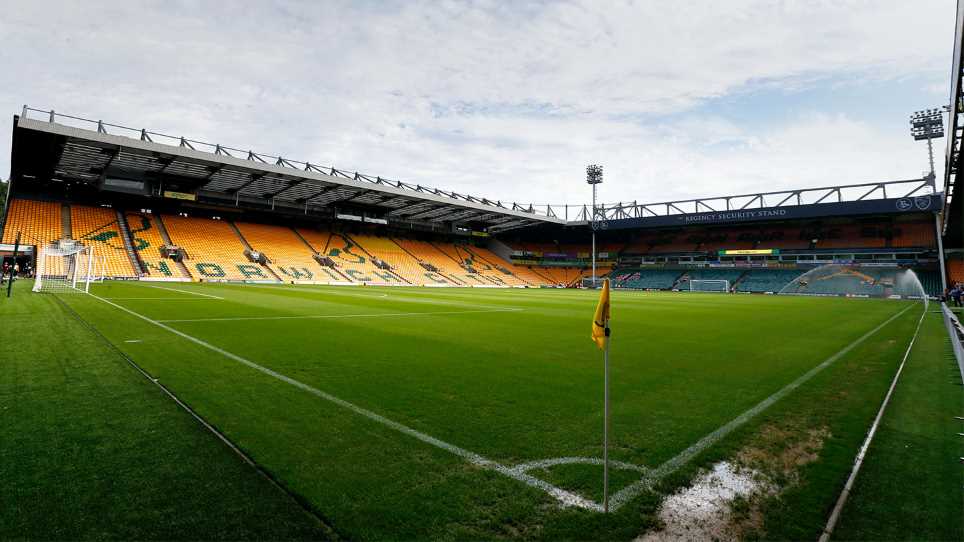 
Tickets for PNE's trip to Norwich City are now on sale.