The Lilywhites return to Deepdale after the final international break of 2017 with their most local visitors of the season heading to PR1 – Phil Parkinson’s Bolton Wanderers.

We have not beaten the Trotters at home since 1992, however, there have actually only been three games in that period, the last being the goalless draw on Halloween 2015, probably one to forget, when the Sky Sports cameras also rolled into town.

The visitors have been in good form of late and are five games unbeaten, knowing that a win will take them out of the bottom three for the first time this season.

The Lilywhites will be hoping that the two week break has allowed some of the many injury problems to clear up, however, seven defenders and two strikers could well be ruled out at this stage.

This is the only local ‘derby’ of the season and a good crowd is expected, with over 3,000 making the short trip up the M61, so a good atmosphere should be there for all who get down to Deepdale.

Click here for the view of opposition boss Phil Parkinson

Click here for Paul Gallagher’s thoughts on the match

Click here for details of the match coverage of the game

The Lilywhites kept a clean sheet, but had to settle for a point in a hard fought Lancashire derby at Deepdale.

With just 18 fit players, including a returning Tom Clarke after seven months out, it was always going to be a tough encounter, but it was a game where North End could have taken even more from it.

Their first half performance, in particular, was a positive one, after a difficult run of results, with four good opportunities to have given them what could have proved to be a decisive goal.

All those chances saw involvement from Paul Gallagher, selected in the midfield, alongside Ben Pearson, with the experienced No.12 orchestrating things and showing his recognised quality from set pieces with sumptuous deliveries that on three occasions went close to providing the necessary to bring a break through.

The game was delayed by just over five minutes after one of the stadium floodlights had gone out, but the game finally got underway amidst a boisterous derby day atmosphere and from the off the home side played at a high intensity, with and without the ball and looked to have returned to the style that served them so well in the opening weeks of the season.

And they were desperately close to getting off to a dream start when a clever short corner between Gallagher and Callum Robinson saw the latter get the ball back at a tight angle. It was very similar to his chance and goal at Charlton Athletic three years previously, but this time his shot was low and Ben Alnwick turned the ball behind for a second corner.

This time the deep ball to the back post found an unmarked Paul Huntington, but the skipper was at a very narrow angle and was unable to hit his effort on target, putting the ball back into the box.

Gallagher, approaching 200 games for the club, had another chance to put over a corner before the quarter hour mark and this time it was Huntington’s central defensive partner Andy Boyle who rose highest in the box, but his powerful header squeezed an inch wide of the left hand upright.

The chances continued to flow and again it was the right boot of Gally that provided the opportunity, this time delivering a free kick from the right hand side, finding Tom Barkhuizen on the penalty spot, but he too flashed his header across the goal and inches wide of the post.

The visitors created very little to test Chris Maxwell in the North End goal, with the three-pronged Trotters attack marshalled well by the four in front of the Welsh stopper, including Kevin O’Connor, making his full home debut and Calum Woods, playing at right back after only one day’s training since injuring his knee in the last home game against Aston Villa 16 days before.

The second half was much less of a spectacle than the first. Phil Parkinson’s side tried to disrupt the fluency their hosts had enjoyed in the opening period, stopping the supply line to Barkhuizen and Robinson down the flanks.

And with the likes of Gallagher, Mavididi, O’Connor, Woods and Robinson having had little football in the past few months, the energy levels of the opening period weren’t quite there in the closing stages.

Daniel Johnson, Josh Harrop and Daryl Horgan were all added to the attack as Alex Neil went in search of a winner that would have warmed the 15,000 plus crowd at Deepdale on a cold night, but the experienced defensive pair of David Wheater and Mark Beevers prevented Alnwick from having to make too many spots, although he was well positioned to claim from Alan Browne, Horgan and Robinson, who all hit the target during the latter period.

However, in the end, it remained goalless, for PNE’s sixth clean sheet of the season and giving them a platform ahead of two tough away games at Bristol City and Norwich City to come in the next week.

Normal matchday prices apply for Friday night’s clash with local rivals Bolton Wanderers at Deepdale, with tickets on general sale for all areas. 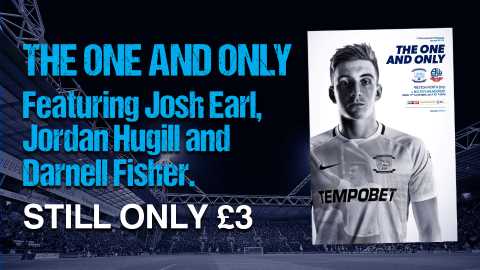 Tickets can be purchased at Deepdale from 9am until 5pm on Thursday, then from 9am until after kick-off on Friday night, both in person and over the ticket hotline – 0344 856 1966.

Away end tickets will be available on the evening, with no increases for matchday purchases. Visiting Bolton Wanderers supporters can buy from the away ticket office next to the Bill Shankly Kop on Lowthorpe Road, with cash and card payments accepted.