The Lilywhites return home after four weeks without a game at Deepdale and will be looking for three points against Dean Smith’s Brentford.

However, the Bees have been in excellent form of late and are unbeaten in their last six league games, although they have drawn four of them, including coming from 3-1 down at half-time to take a point at home to Sunderland last weekend.

North End could replace one Irishman with another, with the suspended Alan Browne ruled out, but Sean Maguire fit to return after injury, meaning manager Alex Neil has plenty to consider ahead of the game.

Tickets are on general sale for all parts of the ground and you can buy in person, over the phone and online, with full details in the story below.

Click here for the opposition’s view of the game

Goals from Sean Maguire and Tom Barkhuizen saw the Lilywhites twice come from behind, but ultimately lost their first home game of the season against Brentford.

Maguire returned from injury to score a stunning goal just before half-time, running from half way to level Nico Yennaris’ opener, but the Bees went back in front through substitute Romaine Sawyer’s deflected effort.

Barkhuizen then hit a sweet half volley from outside of the box into the bottom right hand corner of the Town End goal, but just two minutes later Ollie Watkins slid home from close range from Marc Josefzoon’s right wing cross.

Manager Alex Neil had been forced into a reshuffle after young defender Ben Davies underwent an appendectomy on Saturday morning and was already without fellow defenders Tom Clarke, Greg Cunningham and Tommy Spurr – the latter ruled out for a number of months after a knee operation.

This meant that Calum Woods came into the team as a left-side centre half alongside skipper Paul Huntington.

The home side started the game brightly and dominated the early chances. A long ball from Josh Early found Jordan Hugill, on eight minutes, the forward holding up the ball and feeding Barkhuizen in the right hand corner of the box, but his half volley flashed over Daniel Bentley’s crossbar.

PNE looked good on the counter and Maguire sent Barkhuizen through the middle, who in turn threaded a ball out to Jordan Hugill on the left side of the penalty area. The No.9 shifted the ball into the left hand corner of the box before whipping a shot that beat Bentley, but also flashed just past the right hand upright.

Callum Robinson started the game in the No.10 slot and he wasn’t far away from opening the scoring on 19 minutes as Daniel Johnson freed Sean Maguire on the counter attack, up against Kamohelo Mokotjo. The Irishman did well to wait for support, eventually sliding the ball left for the onrushing Robinson, who drilled the ball into the side netting from 15 yards out.

But it was the visitors who took the lead. Jozefzoon got into space on the right hand side of the box and drilled a shot goalwards; Chris Maxwell made a good save to push the ball away, but it was straight onto the head of Yennaris, who managed to control it enough to direct the ball into the empty net.

There was almost an immediate riposte from Neil’s men as a short corner was set for Johnson to whip in a cross to the back post, and it found Maguire, only for the returning No.24 to head over from six yards out.

However, the Irish golden boot winner wasn’t to be denied four minutes before the break. Some excellent play from Robinson in the middle of the park saw him flick the ball sideways for Maguire to collect five yards inside Brentford half. He then drove towards the penalty area, put Bees skipper John Egan on his backside in the box before arrowing the ball into the bottom left hand corner.

Straight after the goal play was stopped for nearly 11 minutes after Nico Yennaris ran in the back of Jordan Hugill and injured himself in the process, the former Arsenal man eventually leaving the pitch on a stretcher after suffering concussion.

The second half started brightly again for PNE, so it was somewhat against the run of play when Dean Smith’s side went back in front 11 minutes into the latter period. Sawyers, who had replaced Yennaris eight minutes into first half injury time, miss-kicked his initial effort, but eventually got away a shot at the second attempt from just inside box, the chance deflecting off the back of Hugill, to take it past Maxwell. The initial ball in came from Jozefzoon on the right with low ball in that bounced around into the penalty area, eventually falling to the substitute, although North End were at the time down to ten men, with Woods off the pitch receiving treatment to a damaged nose.

The inconsistency of referee David Coote on the afternoon was something that aggrieved the home support. He booked Maguire after only 90 seconds for what he suggested was a simulation and then Paul Huntington was unnecessarily cautioned – his fifth of the season – after the game’s opening goal.

Therefore when he waved play on 20 minutes into the second half when Tom Barkhuizen was blocked off as he looked set to break clean through on goal, the ire of the home fans was extremely strong.

But the No.29 did get his goal at the half’s mid-point. Maguire was again involved on the left of the penalty area, feeding the ball into Robinson. The former Villa man’s shot was blocked, but it came out to Barkhuizen on the edge of the ‘D’ and his drilled a half volley into the bottom right hand corner of the goal.

Similarly to the previous home game, the opposition grabbed a quick goal back, putting themselves back in front on 69 minutes. Jozefzoon exchanged a one-two down the right hand side of the box before getting to the six yard line and pulling the ball across to find Watkins unmarked and the ex-Exeter man had the simple task of tapping home from close range.

Mavididi, Horgan and Harrop were all introduced with plenty of time to spare as the side looked to grab the sixth goal of the game. Numerous balls were put into the box, with the London side’s defence scrambling to keep their lead and ultimately they held on to take the win.

Normal matchday prices apply for Saturday’s clash with Brentford at Deepdale, with tickets on general sale for all areas – as we finally return to PR1 after four weeks! 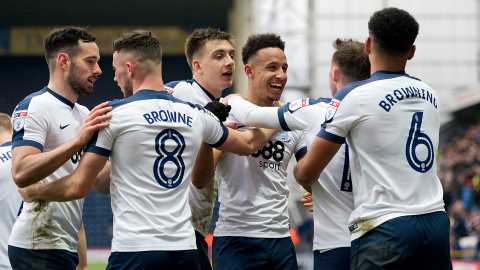 Away end tickets will be available on the day, with no increases for matchday purchases. Visiting Brentford supporters can buy from the away ticket office next to the Bill Shankly Kop on Lowthorpe Road, with cash and card payments accepted.

For home fans travelling to the game, there is a reminder that Moor Park School car park is no longer available, however, the club are trialling shuttle buses from certain areas, with further details available on the shuttle bus article on the website.