North End look to head into the final international break of 2018 on the back of a seven-game unbeaten run, but to do that, they must get a result against Bristol City at Ashton Gate this weekend.

7 November 2018
The Lilywhites face Lee Johnson’s side, looking to extend their positive run of results against the Robins in recent seasons, but know it will be a tough test against a side who have again started the season brightly.
Manager Alex Neil will have to make at least one change for the trip, with goalkeeper Chris Maxwell suspended for the game, with Declan Rudd set to return to the starting XI for the first time since September.
The hosts are likely to include one former North Ender, in Josh Brownhill, in the squad to face his former employers, but their skipper and former PNE favourite Bailey Wright is still on the road back to full fitness after a summer operation.
Another player with both sides on his CV is Callum Robinson, who has a good record against City and will look to continue that before he heads away with Ireland for two games during the break.
Ticket Information
Tickets remain on sale for Saturday's trip for the Lilywhites to face Bristol City at Ashton Gate and it is an all-ticket game – no tickets will be on sale on the day of the game…
Click here for more information
Or click here to buy a ticket for the game
Ref Watch
For the second time this season we have experienced match official Geoff Eltringham taking charge of one of our away games when the Lilywhites travel to Ashton Gate on Saturday…
Click here for details of the match officials
Memorable Match
Back in November 2014 Simon Grayson's Lilywhites headed to Ashton Gate looking to end a run of three straight defeats and they did so with victory over League One leaders Bristol City thanks to Callum Robinson's solitary goal…
Click here for a look back to the game
Opposition View
Bristol City head coach Lee Johnson says his side cannot think of PNE as a bogey team ahead of the visit of the Lilywhites to Ashton Gate this coming weekend…
Click here for his thoughts on the game
Team News
Manager Alex Neil must make at least one change to the side that drew with Ipswich Town to extend their unbeaten run to six games last weekend…
Click here for the latest team news
Match Coverage
If you can’t make the trip to Ashton Gate this weekend, don’t worry, we have you covered with every minute of action available through our media channels…
Click here for details of how to follow the match
Alex Neil’s Thoughts
Preston North End manager Alex Neil has seen plenty to impress him from Saturday’s visitors so far this season, as his side head to Bristol City looking to take their unbeaten run into the latest international break…
Click here to watch the manager’s pre-match interview
Tom Clarke Preview
Preston North End club captain Tom Clarke is enjoying the tempo to training with the majority of the squad back fit and competing for a place in the manager’s plans…
Click here to hear from the captain ahead of the clash with the Reds

A first half goal from Callum Robinson gave the Lilywhites all three points at Ashton Gate to give them their first away win of the season.

Robinson scored his ninth goal of the season ten minutes before the interval, converting from close range after an excellent move involving the four forward players in the side.
Manager Alex Neil made two changes to the side that had drawn at Ipswich Town, Declan Rudd replacing the suspended Chris Maxwell in goal and the Portman Road hero Paul Gallagher coming into the midfield, with Alan Browne dropping to the bench.
And Gally was heavily involved in the first chance of the game, as a cross from the right by Sean Maguire was deflected out to the No.12, roughly 35 yards out in the right-hand channel, and with everyone expecting the shot he cleverly threaded the ball into Tom Barkhuizen eight yards out, but the striker was not expecting it and the ball bounced off him when unmarked.
Before the ten-minute mark the visitors had another chances as Robinson was sent clear by brilliant flick from Maguire. A cross back from the left by the No.7 found the Irishman, but he had to stretch for his header and Niki Maenpaa in the Robins goal claimed the effort below his cross bar.
Just before the mi-way point in the first period Barkhuizen was sent down the right by Maguire, he drove into the right-hand corner of the box and forced a smart blocking save from Maenpaa.
And it was the No.29 who was almost in on goal again on 29 minutes, from a Gallagher through ball, with Adam Webster’s back pass rescued by the leg of Maenpaa with the striker about to pounce.

But the opener came on 35 minutes and it was a brilliant PNE goal. Worked from Maguire on the left, he switched it to the right to Barkhuizen; his ball into the box was deflected and well-collected by Daniel Johnson, who ghosted to the edge of the six-yard box and saw Robinson to his left, passing perfectly for the No.7 to slide home his ninth of the season.

In the first 90 seconds of the half it could have been 2-0 as first Barkhuizen and then Maguire were both denied by superb block tackles and last-ditch efforts from City defenders – it was a blistering opening to the second period.
With eight minutes left former PNE man Josh Brownhill was the first City player of the day to test Rudd, from a 25 yards free kick, that the North End No.1 did superbly to push over the bar for a corner.
But despite six minutes of stoppage time, some excellent defending from North End meant they earned the clean sheet and the win their vocal away support deserved.
Bristol City line-up: Maenpaa, Dasilva, Webster, Baker (Eliasson, 55), Brownhill, Diedhiou (Taylor, 64), Walsh (Paterson, 55), Weimann, Pack (c), Kalas, Hunt. Subs not used: O’Leary, O’Dowda, Kelly, EIsa.
PNE line-up: Rudd, Clarke (c), Earl, Pearson, Huntington, Davies, Barkhuizen, Gallagher (Browne, 74), Maguire (Nmecha, 84), Johnson, Robinson. Subs not used: Crowe, Fisher, Moult, Hughes, Barker.
Attendance: 19,797 (566 PNE fans)
Referee: Mr G Eltringham

Tickets remain on sale for Saturday's trip for the Lilywhites to face Bristol City at Ashton Gate and it is an all-ticket game – no tickets will be on sale on the day of the game.

Tickets are on sale at www.mypne.com, by calling 0344 856 1966 or in person from the ticket office.
They will be on sale until 5pm on Friday for in person and over the phone sales; online sales will end at 1pm on the same day.
North End had been given an initial allocation of 500 tickets for this game, with an additional 150 now supplied, and ticket prices are as follows: Adults £32, seniors (65 and over) and U25s £29, U22s £26, U19s £15 and U12s £1.
Supporters collecting tickets from Bristol City can do so from the away turnstiles from 1.30pm (or when the coaches arrive if later than 1.30pm).

If supporters have any disability or access enquiries they should contact Gareth Torpy at Bristol City on 0117 9630 600 or email supporterservices@bristol-sport.co.uk.
There are also a limited number of wheelchair parking bays at Bristol, bookable in advance of the match day at a cost of £15 per bay. They should contact Gareth on the above number.
Coach travel is also available, and coaches will depart at 9.30am from both Deepdale and Leyland and are priced at £25 per person. 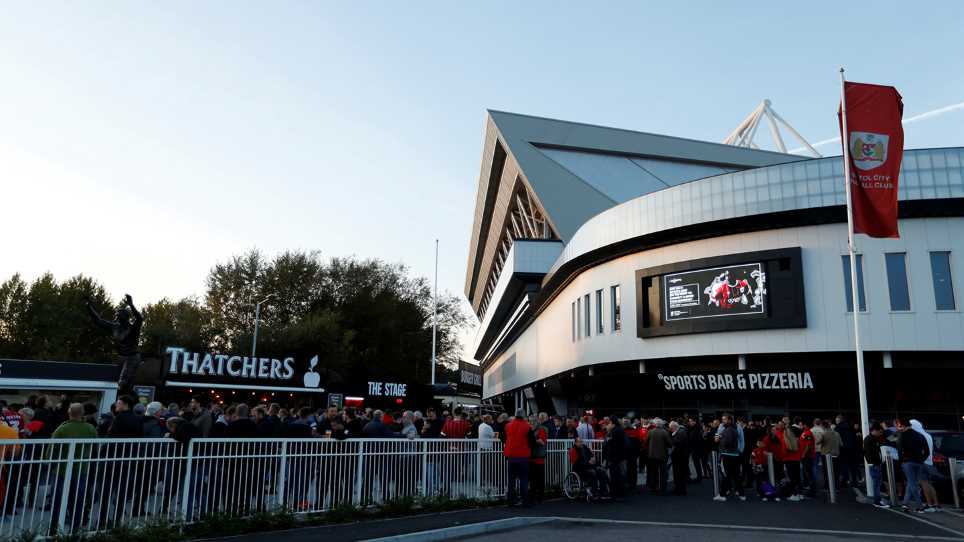 
Tickets for the trip to Ashton Gate next month are now on sale.