A place in the third round of the Carabao Cup is at stake on Tuesday night as Preston North End take on Hull City at Deepdale.

The tie, which will be decided by penalties if level after 90 minutes, will be a 7.45pm kick-off and will be the first of three meetings with the Tigers this season – with Grant McCann’s side a Championship rival.
McCann took over from Nigel Adkins in the summer and has had cup success at Deepdale in 2019, as it was his Doncaster Rovers outfit that ended the Lilywhites 2019 FA Cup campaign back in January.
Both sides made wholesale changes in the first round, with 11 changes made by both McCann and Alex Neil as the team dispatched Bradford City and Tranmere Rovers respectively and there is no reason to think that this game will be any different.
Whoever makes it through will be able to see who they get in round three after the televised tie between Lincoln City and Everton on Wednesday night, with the next round ties played the week beginning 23rd September.
For Your Information
Match Details: PNE v Hull City, Deepdale, Tuesday 27th August 2019, kick-off 7.45pm
Competition: Carabao Cup Second Round
PNE colours: Home kit
Click here to buy a ticket
Here’s all the coverage accessible on PNE.Com in preview of the game…
Ticket Information: Tickets remain on sale for Tuesday night’s Carabao Cup second round tie with Grant McCann’s Hull City at Deepdale. Click here for more information.
Match Officials: The match referee for our second round Carabao Cup tie hasn’t been to Deepdale since the beginning of 2016. Click here for details of who it is.
We’ve Met Before: Preston North End and Hull City meet for the 60th time in competitive fixtures when the line-up at Deepdale for Tuesday night’s Carabao Cup second round tie. Click here for more details of past battles.
How To Follow The Game: If you can’t make the trip to Deepdale for Tuesday’s Carabao Cup second round tie, don’t worry, we will have full coverage on PNE.Com and commentary on iFollow PNE. Click here for details of how you can follow the match.
The One And Only Issue Four: Our fourth edition of the matchday programme sees Josh Harrop as the cover star and main interview, as he discusses his comeback with The One And Only. Click here for details.
Team News: Preston North End manager Alex Neil chose to make 11 changes for his side’s first round victory over Bradford City in the Carabao Cup and could again take the opportunity to rotate his squad for round two. Click here for details of the options.
Alex Neil Happy To See His Team Progressing: Preston North End manager Alex Neil spoke to iFollow PNE to look ahead to the Carabao Cup second round tie with Hull City at Deepdale. Click here for the manager’s full interview.
Connor Ripley Looking Forward To Cup Clash: Should Preston North End manager Alex Neil again choose to rotate his entire first team for Tuesday night’s Carabao Cup second round tie with Hull City, then Connor Ripley could get another chance to impress. Click here for more from Connor. 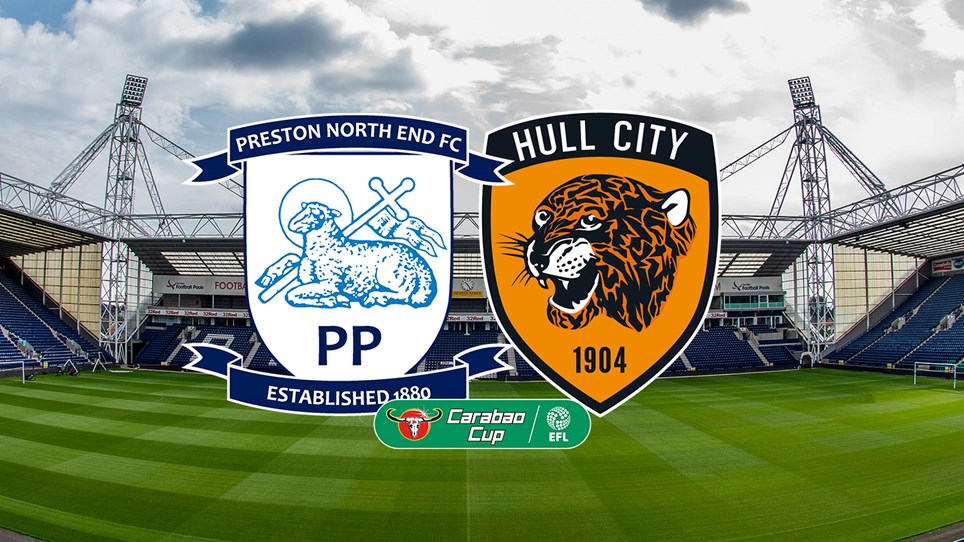 
Preston North End will face Hull City in the second round of the Carabao Cup on Tuesday 27th August, with a 7.45pm kick-off.

Preston North End booked a third round Carabao Cup spot thanks to a 5-4 win on penalties.

The visitors had come from 2-0 down after Paul Huntington and Josh Harrop had put the home side ahead, with Josh Magennis’ penalty and a Jarred Bowen goal with 20 seconds of injury time left taking the game to penalties.
However, Harrop, Ledson, Stockley, Bodin and Browne all converted from 12 yards and Connor Ripley saved Tom Eaves’ effort, to send Alex Neil’s side through at Deepdale.
It was an open game from the outset, with both sides’ attacking intent evident, but it was the Lilywhites who took the game by the scruff of the neck.
A good chance came before the opener when Tom Bayliss, making his Deepdale debut, was found by a combination of Tom Barkhuizen and Andre Green in the box and the No.7’s scuffed shot found its way to Harrop, but the midfielder was unable to get control and get a shot away.
However, they were ahead on 20 minutes as a Harrop free kick from 40 yards out in a right-hand channel was met by a leap from Huntington – making his first appearance of the season – and he headed down and into the bottom right corner from 15 yards out, rising above Tigers centre half Matthew Pennington.

And the lead was doubled six minutes later as Ryan Ledson played one of many superb balls through that Barkhuizen raced onto, firing on target, with Matt Ingram in the Hull goal pushing the ball out to where Harrop was on hand to put the ball into the empty net. Credit was also due to referee David Webb in the build-up for playing advantage after a foul on Brad Potts.

The visitors were back in the game before the interval. Leo Da Silva Lopes collected a clever back heel from Magennis on the left-hand edge of the penalty area, but was judged to have been brought down by PNE skipper Alan Browne by match official Webb.
Magennis stepped up and sent Connor Ripley the wrong way, powering his penalty into the bottom right-hand corner of the Alan Kelly Town End goal.
The Lilywhites had two more good chances to extend their lead before the interval. Firstly, Barkhuizen collected the ball on the left touchline, before driving 30 yards inside and powering a shot from 20 yards – Ingram making a fine diving save to deny the striker.
And then, with the last touch of the half, Josh Ginnelly – also making his first start at Deepdale and playing in the left back position – found space to cut inside from the left and fire from the edge of the ‘D’, forcing Ingram to make another fine save.
Barkhuizen was replaced by Stockley at the break, but it was another strong run from midfield that almost brought a third four minutes into the second half. Bayliss collected mid-way inside his own half and drove into City territory, before releasing Potts down the right, who got into the area, but his powerful shot was over the bar.
After more excellent reading of the play by Ledson, inside the final 15 minutes, the midfielder found Harrop, who danced past three tackles in the box before firing low shot that beat Ingram, but flashed an inch past the right-hand upright from 15 yards out.
A minute later and Ripley made a superb double save. Like Harrop, Tigers substitute Jarrord Bowen had danced his way into the penalty area and got away a snap-shot, but the custodian blocked with his legs and then saved Nouha Dicko’s follow up shot too, to keep the lead intact.
With less than six minutes to go North End had the ball in the back of the net again, with substitutes Jayden Stockley and Billy Bodin combining to see the latter stroke home, only for the linesman’s flag to go up for offside.
But with 20 seconds of added time remaining the visitors took the game to penalties. A long ball in from the left-hand side by Kevin Stewart was knocked back across goal by Pennington and Jarred Bowen poked home under Ripley inside the six-yard box.

It was straight to penalties, with the toss deciding they would take place in front of the North End fans in the Town End.

Hull were first up, with Magennis, already a scorer from 12 yards in the game and he fired home with power in a very similar spot as the one converted in the first half. North End’s first taker was Harrop and he levelled into the bottom left-hand corner of Ingram’s goal.
Substitute Tom Eaves was second up for the Tigers and Rip[ley guessed right, diving away to his right to push the ball away. Ledson had the chance to put PNE ahead and did so, sending Ingram the wrong way, pushing the ball into the bottom left.
Former Barcelona man Jan Toral was third up for the visitors and the left footer made it 2-2 with a cool effort into the bottom right corner. Jayden Stockley was the next PNE man to step up and confidently powered the ball into the bottom left corner.
Leo Lopes, formerly of Wigan Athletic, was the Tigers fourth spot kick man and he too found the bottom left corner of the goal, before Billy Bodin strode up for the Lilywhites and made it 4-3 going powerfully straight down the middle.
Kevin Stewart had to score or PNE were through and after a long run up he coolly slotted down the middle, leaving skipper Alan Browne the pressure penalty to win it and that he did, smashing into the bottom left hand corner to put the Lilywhites in round three with a 5-4 penalty win.
PNE line-up: Ripley, Browne (c), Ginnelly (Rafferty, 78), Ledson, Storey, Huntington, Green (Bodin, 68), Bayliss, Barkhuizen (Stockley, 46), Potts, Harrop. Subs not used: Crowe, Baxter, O’Reilly, Walker.
Hull City line-up: Ingram, Tafazolli, Batty (c) (Eaves, 78), Toral, Dicko, McKenzie, Bowler (Bowen, 61), Fleming (Stewart, 37), Pennington, Magennis, Da Silva Lopes. Subs: Long, De Wijs, Burke, Lewis-Potter.
Attendance: 6,093 (360 Hull City fans)
Referee: Mr D Webb


Preston North End will face Hull City in the second round of the Carabao Cup on Tuesday 27th August, with a 7.45pm kick-off.

PNE secured their place in the second round of the competition with a 4-0 win over Bradford City on Tuesday night, whilst the Tigers defeated Tranmere Rovers 3-0 at Prenton Park to set up the tie in PR1.
Tickets are available online at MyPNE.Com, by calling 0344 856 1966 or in person from the ticket office and the ticket office is open on Bank Holiday Monday from 10am until 4pm and from 9am until kick-off on Tuesday.
Tickets are priced as follows: Adults £10, concessions £5 and U19s £1. All U14s must be accompanied by an adult.

Fans can also load the tickets to their member cards or print at home, meaning there is no need to turn up and join a queue at the ticket office on the night.
All stands except the Sir Tom Finney North will be open, with hospitality also available for this fixture.
The Invincibles Lounge and the Sir Tom Finney Lounge will both be open and are priced at £35 for adults and £30 for concessions. Executive boxes are also available and are priced at £599 each (based on ten guests).
Bookings for hospitality can be made between 10am and 2pm on Monday or from 9am on Tuesday, alternatively you can email commercial@pne.com.