The Lilywhites return to action back in England following their tour to Ireland, with a friendly much closer to home against AFC Fylde at Mill Farm on Saturday afternoon.

The game, the third of the 2019/20 pre-season, sees Alex Neil’s men step up their preparations as they take on Dave Challinor’s 2019 FA Trophy winners in a 3pm kick-off.

The game is likely to see the return to action of forward Sean Maguire , who was given an extra week off during the summer due to his exertions with Ireland.

Josh Harrop, who was withdrawn early from Monday’s win at Cork City, has been able to train with no issues in the days since the game and is expected to continue his return from ten months out with his knee injury.

The hosts, after reaching the National League Play-Off Final and winning the Trophy at Wembley, have been active in the transfer market over the summer, in the hope of going one better this season and having beaten Wigan Athletic on Tuesday night, will be a good test for PNE on their return from the training camp.

This is North End’s second trip to Fylde; the aforementioned Maguire having grabbed a hat-trick in the previous friendly last summer and he will look to hit the ground running on his return to action.

AFC Fylde use an electronic ticket system that allows travelling supporters to purchase tickets in advance, meaning you can purchase online and print your ticket at home. Click here to purchase your tickets now.

Supporters can also pay on the day of the game, but are advised to purchase in advance where possible to avoid queues. For any other enquiries please call AFC Fylde on 01772 598855 and ask for the ticket office.

We will once again be broadcasting the game live via iFollow PNE, with full coverage from our commentary team of Matt Hardman and Brett Ormerod will be on air from 2.55pm. You can watch if you are a monthly or full seasonal subscriber – click here for more information.

We will also have all the usual coverage on our website and social media channels, to keep you fully covered across the game and the action.

Sean Maguire scored a hat-trick on his first run out of pre-season, as the Lilywhites put on a dominant display against AFC Fylde in their third friendly. 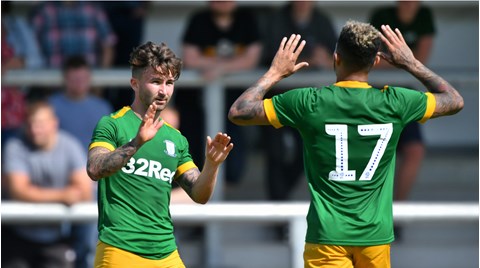 Billy Bodin also added another goal in a game that could have seen an even bigger margin, with Paul Gallagher and Daniel Johnson having a penalty saved either side of half-time.

Maguire, who had been given an extra week off following his exertions with Ireland in the summer, showed no rustiness as he put the Lilywhites two up inside the opening 16 minutes, this after Gallagher’s fourth minute spot kick had been saved by Dan Lavercome in the Coasters goal.

Bodin made it 3-0 before half-time and Maguire completed his treble, to take the matchball home, with his final touch of the game just before a mass of substitutions by both managers.

Johnson had a chance to add a fifth with just over ten minutes to go, but fellow substitute Jack Ruddy in the home goal made a superb stop to prevent the No.11 scoring from 12 yards.

After using separate teams for each of the four 45 minutes played in the two matches so far, North End boss Alex Neil upped the outings this time, with his starting ten outfield players all completing an hour and Connor Ripley – in goal – playing the full 90 minutes between the sticks.

And the visitors got straight into the rhythm of things from the off, with Kyle Jameson bringing down the excellent Bodin just four minutes in, giving referee Dave McNamara no choice but to point to the penalty spot.

Gallagher, wearing the captain’s armband, stepped up with his usual back to the goal routine, but didn’t quite make a clean connection and Lavercombe got down well to his left to save in front of an end packed with a vocal North End support.

But those fans didn’t have long to wait for the opener, which arrived on 11 minutes. Ben Pearson played a through-ball for Maguire down the right side of the box and the Irishman got off a sharp shot that clipped off a defender and curled just wide of the left-hand post.

From the resulting corner, from Gallagher on the left, Andrew Hughes rose highest to head down and Maguire, on the turn, fired home from close range into the top right-hand corner. 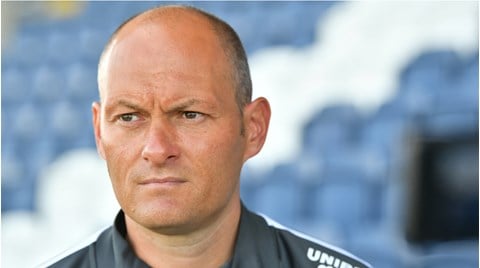 It was 2-0 just five minutes later. This time a superb ball from centre half Ben Davies released Maguire through the middle and he collected well, brought the ball under control and drove a shot from the edge of the penalty area past Lavercombe into the bottom left-hand corner of the goal.

The No.24 could have had his hat-trick inside 30 minutes as fellow international Alan Browne threaded through a clever ball only for a positive and well-timed piece of defending from Jameson got a block in.

The same man had Dave Challinor’s side’s best chance of the opening period just after the half hour mark. A wide free kick from former PNE man Ryan Croasdale was headed down by Neill Byrne and Jameson hooked a volley, but just wide of Ripley’s right-hand upright.

The third goal of the game came six minutes before the interval. Browne provided the assist, finding Welshman Bodin on the right. He checked inside and then back out, leaving the Fylde defence dizzy before seeing the smallest of gaps to drill a low shot into the inside netting of the bottom left corner from 15 yards.

The second half had started quietly, but just as 21 players prepared to enter the action on the sidelines, Maguire made it 3-0 and made the matchball his own. This time he was in the right-hand corner of the penalty area and, like Bodin before him, threaded his shot perfectly into the bottom left corner of the goal.

After the changes, the game took a while of spark to life again and it was the home side who had the first good chance and went close to pulling one back when Ashley Hemings put over a left wing corner and Callum Grogan headed it down at the back post, but against the foot of the right-hand post.

The second penalty was awarded with 11 minutes left, when Tom Barkhuizen collected the ball from Louis Moult after a superb passing move involving half a dozen of the side in green, only for Lewis Montrose to slide in and take the legs of the man who signed a new contract in midweek.

Johnson stepped up with his familiar stuttering run-up, but sub Ruddy picked the right way and made a full-stretch dive to claim the effort, that was arrowed towards the bottom right-hand corner.

The closing minutes saw both custodians at the top of their game; firstly Ripley tipped over an effort from Nick Haughton, who had raced 40 yards from midfield before unleashing an effort from the edge of the ‘D’ and then, after some fantastic one-touch football from North End Josh Harrop won a corner, which he delivered himself.

Paul Huntington rose highest to meet the cross from the No.10, the stopper pushing the ball out, with Hunt’s centre half partner Jordan Storey the first to react, the goalkeeper blocking his shot from close range as the game finished 4-0.