Preston North End and Blackburn Rovers, founder member of the Football League back in 1888, meet for the 100th time in league encounters at Ewood Park on Friday night.

It is actually only our 48th trip to Rovers’ current home, however, with the first two games played at Leamington Road back in the 1880s.

Over 130 years on, the two teams are separated by just three points in the middle of the Championship table and will be looking to this Lancashire derby as a chance to kick on for the remainder of the season.

The last few trips to East Lancashire have seen anywhere up to 7,500 North End fans travelling to support the team, but it will be a different game this time around.

Team News
Manager Alex Neil was without skipper Alan Browne for last weekend’s game against Rotherham United, so he will need to check on the No.8 before the short trip to Blackburn.

Long term injured Declan Rudd, Patrick Bauer and Louis Moult are all still absent, otherwise there are no new injury concerns for the Lilywhites.

Blackburn have suffered an injury-hit season so far - especially in defence and midfield - but their options in the latter area have improved considerably in recent weeks with Bradley Dack and Lewis Travis returning to the first team after lengthy absences, while development squad appearances for experienced duo Elliott Bennett and Corry Evans look set to increase the depth of a squad that has welcomed a dozen new faces this season.

The gaps in the squad mainly remain at the back, where an entire back four of Derrick Williams, Daniel Ayala, Scott Wharton and Joe Rankin-Costello are still sidelined, having collectively missed nearly a season's worth of action between them so far in 2020/21. However, full back Barry Douglas could return this weekend after missing Rovers' last outing due to the birth of his daughter.

In the most recent blow to manager Tony Mowbray's options, German international midfielder Lewis Holtby has once again suffered the cruel fate of a lateral knee ligament injury for the second season in succession, leaving the field just 15 minutes after coming on as substitute in last weekend's defeat at QPR. The results of a scan look set to decide whether he will miss the remainder of the campaign.

Another highly experienced midfield asset, Bradley Johnson, has missed the past fortnight of action with a hamstring injury and the derby day is expected to come too soon for him to return.

Rovers' greatest strengths this season have been at either end of the field, with Belgian goalkeeper Thomas Kaminski - a summer signing from Gent - proving to be a match-winner on several occasions, while the reliable attacking trio of Ben Brereton, Sam Gallagher and Adam Armstrong - the latter sitting second in the league's scoring charts with 17 goals - have been able to line up together for all but a handful of outings this season. 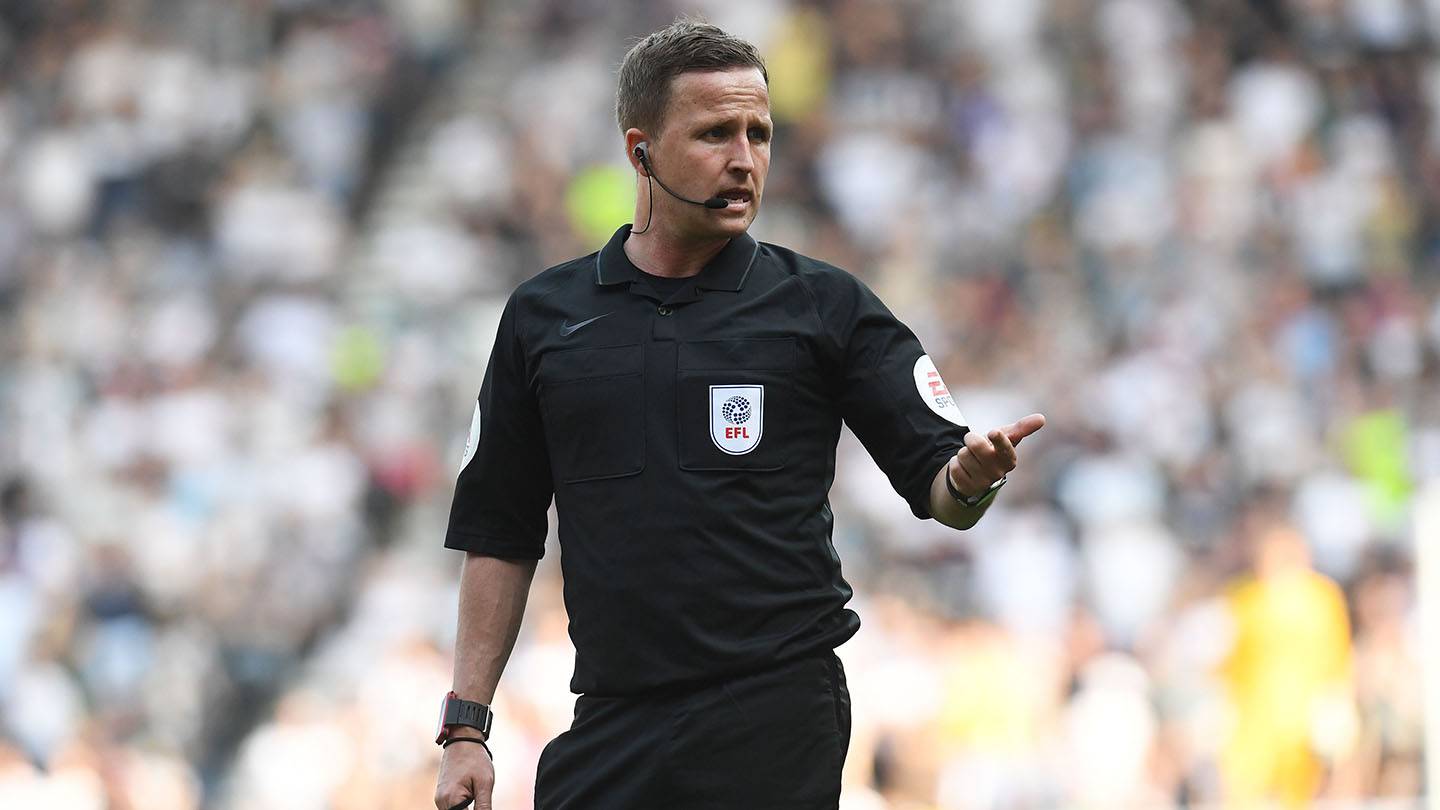 Match Officials
The match referee for this Friday’s game is David Webb; taking charge of North End for the second time this season.

His first game was the 1-0 home win over Sheffield Wednesday in November; whilst he has refereed two Rovers games in 2020/21, a 0-0 home draw with Middlesbrough and a 1-0 defeat at Stoke City.

We saw David three times in 2019/20, having officiated the Carabao Cup second round penalty victory over Hull City at Deepdale back in September, November’s 1-0 win over Charlton Athletic and the clash at Fulham’s Craven Cottage just before lockdown.

Overall then he has refereed the Lilywhites on 14 occasions, some of the most memorable games including the FA Cup win at Wycombe Wanderers, when Kevin Davies scored a stunning strike from 35 yards, and a 3-2 home win over Crewe Alexandra in 2011 in the league cup.

Overall, this season, he has taken charge of 22 games, issuing 56 cautions and four red cards. He will be assisted by Phil Dermott and James Wilson, whilst the fourth official will be experienced Championship official Oliver Langford.

Jonathan Breeze and former North End midfielder and captain Paul McKenna are on commentary duties, with replays, graphics and coverage from Ewood Park from approximately 7.15pm on Friday evening.

Linked Stories
Alex Neil: “The Onus And Duty Is On Us”: For the past few visits to Ewood Park, the Lilywhites have been backed by anything up to 7,500 supporters behind the goal. Click here for the full interview.

A Match To Remember: Back in 2016 Preston North End kept up an excellent run of form with a narrow win at ten-man Blackburn Rovers. Click here for the details.

A Foot In Both Camps: Preston North End’s fans’ voted player of the decade Paul Gallagher certainly has a foot in both camps this Friday, although he certainly sees Deepdale as his ‘home’. Click here to hear from Gally.

The Irish full back started his first game since his return to the club and scored a stunning strike, before Lindsay headed home Ryan Ledson’s corner.

A dubious Adam Armstrong penalty just before half-time narrowed the deficit, but an excellent rear-guard display from Alex Neil’s men in the second half led them to a 2-1 victory over Tony Mowbray’s side.

The manager had made four changes before the game, reverting to a 3-5-2 formation, with Cunningham and returning club captain Alan Browne as the wing backs, plying very high up the pitch.

Jordan Storey also came into the side, as part of the three-man defence, flanking Lindsay and Andrew Hughes on the opposite side, whilst Tom Barkhuizen partnered Ched Evans – who won the Sky man of the match for another fantastic display leading the line – in attack.

The opening part of the game saw the greens with plenty of the ball and when they grabbed the opener, on 19 minutes, it was thoroughly deserved.

Browne switched play from right to left, with his fellow Irishman controlling perfectly to allow him to drive to the left corner of the penalty area, before drilling an arrow-like shot with his left foot into the bottom right-hand corner of Thomas Kaminski’s goal.

They should have had another great chance to double the lead just four minutes later, when Ched Evans was seemingly brought down in the penalty area by Sam Gallagher, but referee David Webb waved away the claims.

What resulted, however, was two corners, both delivered expertly by Ledson. The first saw Storey first to it, but his header was deflected wide and the second was headed back across goal by Hughes, but just away from Evans.

A deserved second arrived two minutes before the break though, as another Ledson delivered from the left corner flag was met in the six-yard box by Lindsay, getting between a Rovers defensive sandwich, to nod into the bottom left-hand corner.

It looked like they would go in at the break with a two-goal advantage, but in the first of three added minutes Andrew Hughes was very harshly adjudged to have brought down Gallagher, assistant Phil Dermott giving it, with the match official waiting for the flag man to make the decision.

Armstrong stepped up and Daniel Iversen went the right way, but it was too powerful and into the bottom right corner.

However, the stopper was needed in the final minute of the half when Bradley Dack found the goalscorer, who struck at goal with the outside of his boot and looked to have found the bottom left corner, until the Leicester City loan man made a superb one-handed stop to dig the ball out.

The second half saw the home side with more of the ball, but without Iversen having any saves to make - in fact it was Kaminski who was the busier of the two ’keepers, with three good chances falling the way of North End.

Just after the interval Barkhuizen drove forward and found Daniel Johnson in a central position 18 yards out, but his shot from the edge of the penalty area came off home skipper Darragh Lenihan and out for a corner.

Just before the hour mark Cunningham nicked the ball off Everton loanee Jarrad Branthwaite in the middle of the pitch and sent Barkhuizen through in a left-hand channel. His effort beat Kaminski, but was narrowly wide of the right-hand post.

Emil Riis and Brad Potts replaced Johnson and Barkhuizen and the two introductions both went close to sealing the points.

With 13 minutes left Potts sent the Dane through on goal down the left, he did extremely well to check inside, putting the ball through Branthwaite’s legs. The defender was beaten and clipped the striker’s heels, but the PNE No.19 stayed up and shot, seeing Kaminski save with his legs. If he had gone down it would have been a clear penalty, but his honesty saved the Rovers No.30.

The last few minutes were frantic. Potts broke right at the heart of the Blackburn defence and with Riis and Evans on either side of him, saw a shot deflected wide and from the resulting corner they had the ball in the net, when again the No.44 got a shot on target, it coming ff Evans and flying into the bottom right corner, but again they were denied when Mr Dermott’s flag went up.

The five and half minutes of injury time saw a lot of hopeful balls forward, into and around the North End penalty area, but some heroic efforts from the defensive unit saw Iversen not called into action and they took the win.