Preston North End play their second home game in the space of three days with a Roses battle against West Yorkshiremen Huddersfield Town at Deepdale this Saturday.

Both sides will be looking for a positive result after contrasting midweek matches, with the Terriers unable to get anything from their trip to Wayne Rooney’s Derby County, whilst the Lilywhites were unable to break down QPR in front of the Sky cameras in PR1.

The two sides last met back in late October, when North End came from behind to take all three points at the John Smith’s Stadium, thanks to a superb brace from skipper Alan Browne.

The Irish international midfielder moved back into the middle of the park against Mark Warburton’s men in midweek and if he continues in that role, he will look to keep up a good record against the visitors, who he scored a late winner against in the same game back in 2016.

The on loan centre half and the experienced midfielder joined Ryan Ledson, Sean Maguire, Billy Bodin, Declan Rudd, Patrick Bauer and Louis Moult in the stands for the clash with Mark Warburton’s men.

For Carlos Corberán, he will need to check on the status of Jonathan Hogg’s injury, after the midfielder missed the midweek defeat at Derby County.

Jaden Brown will be missing after his red card late in the game at Pride Park, whilst new recruit Yaya Sanogo, might not be ready to be involved yet after completing his quarantine period.

Match Officials
Taking charge of his Saturday’s game is Isle of Wight match official James Linington, his second Deepdale visit of the season, having officiated the 2-2 home draw with Wycombe Wanderers at the beginning of December.

So far this season he has officiated 21 games, issuing 46 yellow cards and two reds and he
Has not refereed the Terriers yet this term. He will be assisted by Mark Dwyer and Rob Merchant, with experienced Championship official Stephen Martin acting as the fourth official.

A Match To Remember: It's five years ago, astonishingly, since the game we look back to for our latest blast from the past, as now club captain Alan Browne grabbed a last-ditch winner to earn PNE victory over the Terriers. Click here for the details.

Jordan Storey Feeling Sharp After Return: Preston North End central defender Jordan Storey admits that after the departure of Ben Davies and the season-ending injury to Patrick Bauer, he needed to step up. Click here for Jordan’s thoughts.

The One And Only Issue 17: The Preston North End 2020/21 top scorer Scott Sinclair is the main feature in Saturday’s matchday programme against West Yorkshire visitors Huddersfield Town. Click here for more information and to order your copy.

A Foot In Both Camps: We head over to India for our latest interviewee in this feature, to catch up with a former defender of both the Lilywhites and the Terriers. Click here to read the interview.

Potts fired home after Sinclair had seen a shot saved midway through the first half and Evans drilled in the second from a cross from the left by the first scorer, before Sinclair completed the scoring from a superb team move with just over ten minutes to go.

It was an unchanged squad named by manager Alex Neil from the goalless draw with Queens Park Rangers three days earlier, but it was the visitors who had the first two opportunities.

On both occasions Daniel Iversen was in good form, denying Isaac Mbenza five minutes in, who rifled a shot goalwards from five yards outside right corner of penalty area and then making another good stop on the 20-minute mark to deny Duane Holmes, after a clever lofted through ball by Duane Holmes.

However, the home side went in front 23 minutes in. A superb through ball from Evans sent Sinclair in behind, he drew Ryan Scholfield from his goal, but the Terriers keeper made a fine save, but the ball came out to Potts who drilled a half-volley back that squeezed under Naby Sarr’s boot and into the bottom right-hand corner from 15 yards out, for his fourth goal of the season.

The West Yorkshire outfit had an opportunity to draw level before half-time. A foul on Fraizer Campbell 27 yards out gave Mbenza a free kick effort which he got on target, but it was well-saved diving to his left by Iversen with two hands, at a good height for him. 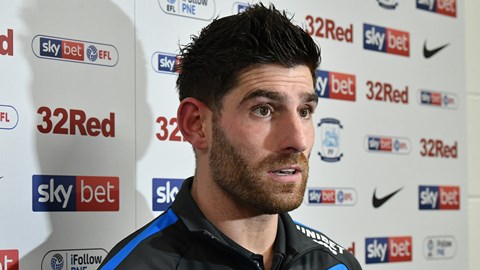 In the second half North End were more dominant and just before the hour mark they had a good chance to make it two. A great ball from Greg Cunningham was fired into Evans on the edge of the ‘D’; the striker laid the ball off for Potts, who hit a stunning curler with shape from 25 yards that went off the top of the right corner of the cross bar and over the bar.

The second came though on 67 minutes. Skipper Alan Browne played a sublime ball to send Potts down the left and he drove into the penalty area and pulled the ball across for Evans running in, who slammed home from 15 yards out, taking a deflection off Sarr on the way.

And it was three on 79 minutes with the goal of the game. A clearance in his own areas by Evans, found Alan Browne, who played a ball with the outside of his boot to Barkhuizen - who had just come on – who gathered from behind him and then crossed with the outside of his right foot from the left, perfectly into the path of the onrushing Sinclair who fired a side-footed effort back across Schofield and into the goal to complete the scoring.