Two and a half weeks on from their last Championship fixture, PNE return to league action this weekend with a trip to face Derby County.

Tickets for this fixture will remain on sale from www.mypne.com until 1pm on Friday, while sales will continue over the phone on 0344 856 1966 and in person from the Deepdale ticket office until 4pm on Friday.

Please note, there will be no sales or collections at Pride Park on the day of the game, therefore all tickets must be collected from Deepdale before 10.30am on Saturday morning. Find full ticket details here.

Those unable to make it to Pride Park will be able to listen to the game live on iFollow PNE with a £2.50 match pass, with commentary coming from Jonathan Breeze and David Buchanan, while those overseas can watch the match live for £10. Click here to subscribe now!

We will also be providing our usual coverage across our social media channels, as well as right here on PNE.Com.

Ryan Lowe confirmed in his press conference that the only men unavailable to him this weekend will be Ryan Ledson and Tom Barkhuizen.

Greg Cunningham, who has been sidelined since the beginning of February, is back in full training and in contention to feature.

All players who went on international duty returned to Euxton unscathed and have taken part in training. 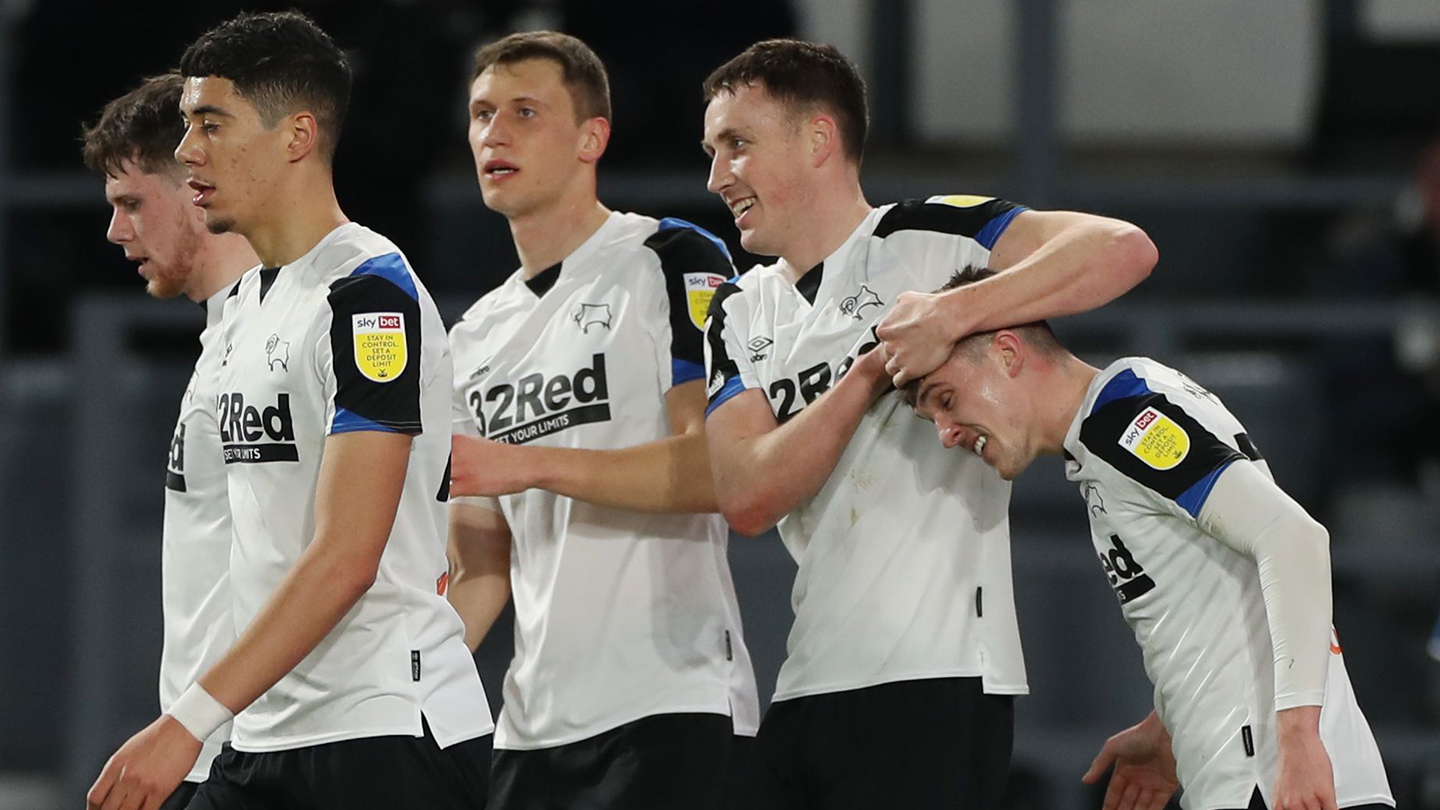 Hit with a 12-point deduction in September, followed by a further nine points, Championship survival has been the aim for Derby County this season.

Currently sat eight points below the dotted line, there is still plenty of work to do if that ‘great escape’ is to be achieved, but the Rams have shown all campaign long that they will not stop fighting.

With a side largely made up of free agents and Academy products, Wayne Rooney’s side have arguably done better than some would have expected given the difficulties going on off the pitch.

Derby County have made Pride Park a difficult place to visit so far this season, losing just three times at home in the league, while they have won seven of their last 11 fixtures on their own turf.

The Rams’ talisman so far this season has been Wales international Tom Lawrence, who has played a direct part in 39.5 per cent (15) of their goals this term.

PNE have the better of the head-to-head record between these two Football League founders, winning 52 of the 123 meetings, compared to Derby’s 47 victories.

It was a goalless draw at Deepdale in the reverse fixture between these two sides, as the people of Preston celebrated the life of Mr Trevor Hemmings five days after the owner’s passing.

On another day, North End could have taken all three points from the Rams, with Emil Riis arguably having the best chance of the game on 82 minutes as he went one-on-one with Ryan Allsop, but the goalkeeper came out on top. 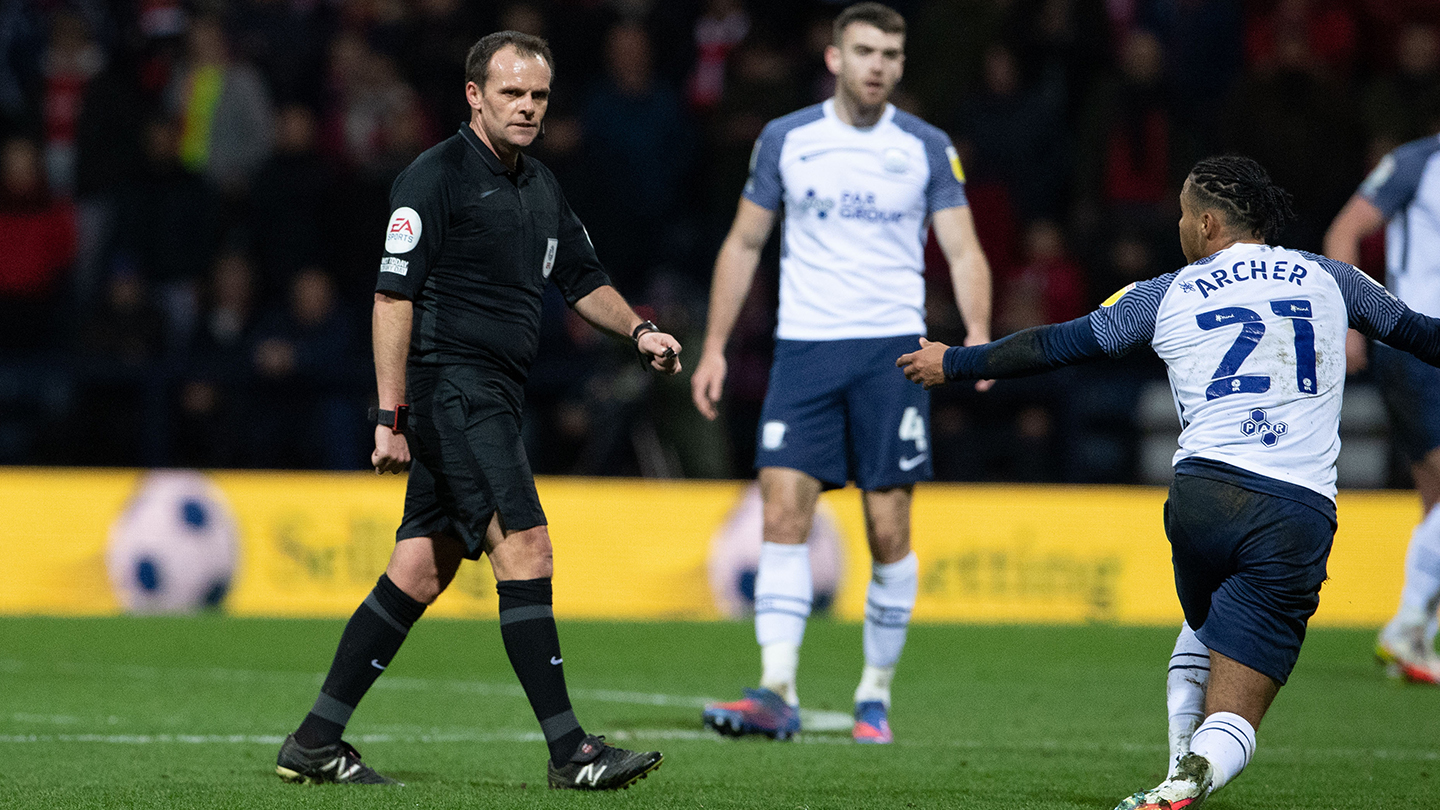 Geoff Eltringham will take charge of this fixture, for what will be the 28th PNE match of his career.

Eltringham last refereed a North End game just over a month ago, as he held the whistle for the goalless draw against Nottingham Forest at Deepdale in February.

He has shown 114 yellow cards and three reds in his 27 games refereed so far this season.

Both sides were down to ten men, with Liam Lindsay and Max Bird having been sent off either side of half-time, before substitute Morrison earned victory for his side late on.

There was a switch in personnel and formation for North End from the last game, with Ryan Lowe making four changes and opting for a 4-3-3.

It was all PNE in the early stages and they could have taken the lead within two minutes, with a corner routine setting up space for Daniel Johnson on the edge of the box, but his effort was blocked.

North End’s threat continued, mainly through Andrew Hughes down the left flank, sending crosses into the area for both Emil Riis and Ched Evans, with neither able to test the goalkeeper.

At the other end, Daniel Iversen was called into action for the first time 19 minutes in, diving to his right to tip Jason Knight’s long-range shot wide.

The Rams then had a great chance soon after, as Malcolm Ebiowei’s cross found Tom Lawrence six yards out, and the home captain flashed a header inches past the post.

Lawrence was involved in the next major act of the game, as he was pulled down by Lindsay who was chasing the Derby captain towards his own goal, and referee Geoff Eltringham produced a red card.

Emil Riis was sacrificed for Sepp van den Berg at that point and the teams went into the break goalless, but Derby could have had the lead seven minutes into the second half if it were not for Iversen, who saved with his left foot to keep out Lee Buchanan’s low drive.

On 55 minutes, the red card was back out, this time for Derby’s Bird, whose high-foot in a strong challenge on Whiteman resulted in the midfielder receiving his marching orders.

Goalmouth action in the next 20 minutes or so was few and far between, but the Rams took the lead on 81 minutes through Morrison, as he finished off the rebound after Iversen had produced two great stops from a corner.

The Dane was called into action by Morrison again just moments later, this time tipping wide, while at the other end Johnson volleyed over for North End as they looked for an equaliser.

Sepp van den Berg also came close late on, heading into the ground and seeing the ball loop up onto the crossbar, but it was defeat for North End at full-time.

Tickets for our away game against Derby County on Saturday will remain on sale until Friday 1st April.

Preston North End head to Pride Park to take on the Rams for a 3pm kick-off and, as of Friday morning, around 1,350 tickets of the 2,200 allocation had been sold.

Due to that limited allocation, the club considered having a priority sales period, however following discussions, tickets went straight on general sale as normal.

Tickets will remain on sale until 1pm on Friday 1st April online from www.mypne.com, while sales will continue over the phone and in person from the ticket office until 4pm on Friday.

Due to the pandemic's impact on Derby County's matchday logistics, there will be no sales on the day of the game and there will be no collections at Pride Park for any pre-purchased tickets.

There will also be no duplicate tickets issued to PNE fans, therefore all tickets must be collected from Deepdale before 10.30am on the day of the game.

Any supporters who wish for their tickets to be posted out will need to buy over the phone on 0344 856 1966, as this option is not available online for this fixture, but please note tickets cannot be reissued if lost in the post so this is at the supporter's risk, and this option is only available until 3pm on Wednesday 30th April.

Tickets for infants aged two to five are free of charge but must be purchased as part of a pair with a parent/guardian aged 18 or above, while children under the age of two will not be permitted entry to the stadium.

Any child aged 13 and under must be accompanied by somebody aged 18 or above.

Included in the above allocation are eight pairs of tickets for supporters in a wheelchair, which are located on the disabled platform. Prices are as above, with the carer ticket provided free of charge if required.

Tickets for ambulant disabled supporters are included in the main allocation, with prices according to the relevant age category, alongside a complimentary carer ticket if required.

Derby County have a car parking area designated for away Blue Badge holders, with spaces priced at £8.50 on a first come, first served basis. These must be booked no later than 24 hours before the match, and to book a space supporters should ring 01332 667528 or email emma.drury@dcfc.co.uk.

Club travel is available for £15 per person, with coaches departing both Deepdale and Leyland at 11.15am.