Preston North End will look for a third consecutive Championship victory this weekend when Birmingham City come to Deepdale.

Tickets for this game will remain on sale right up until kick-off, with supporters able to buy online from www.mypne.com, over the phone on 0344 856 1966 or in person from the ticket office.

Supporters aged 18 and over will be required to provide evidence of their Covid-19 certification, whether this be in the form of a vaccination pass or proof of a negative Lateral Flow Test. Find full details here.

Our fan zone will be open again for this fixture, opening at 12pm with last orders before the game at 2.30pm, and it will then reopen after the game.

Supporters in the UK and Ireland are able to listen to the game live on iFollow PNE for £2.50, while those overseas can watch live with a £10 match pass. Get your match pass here! 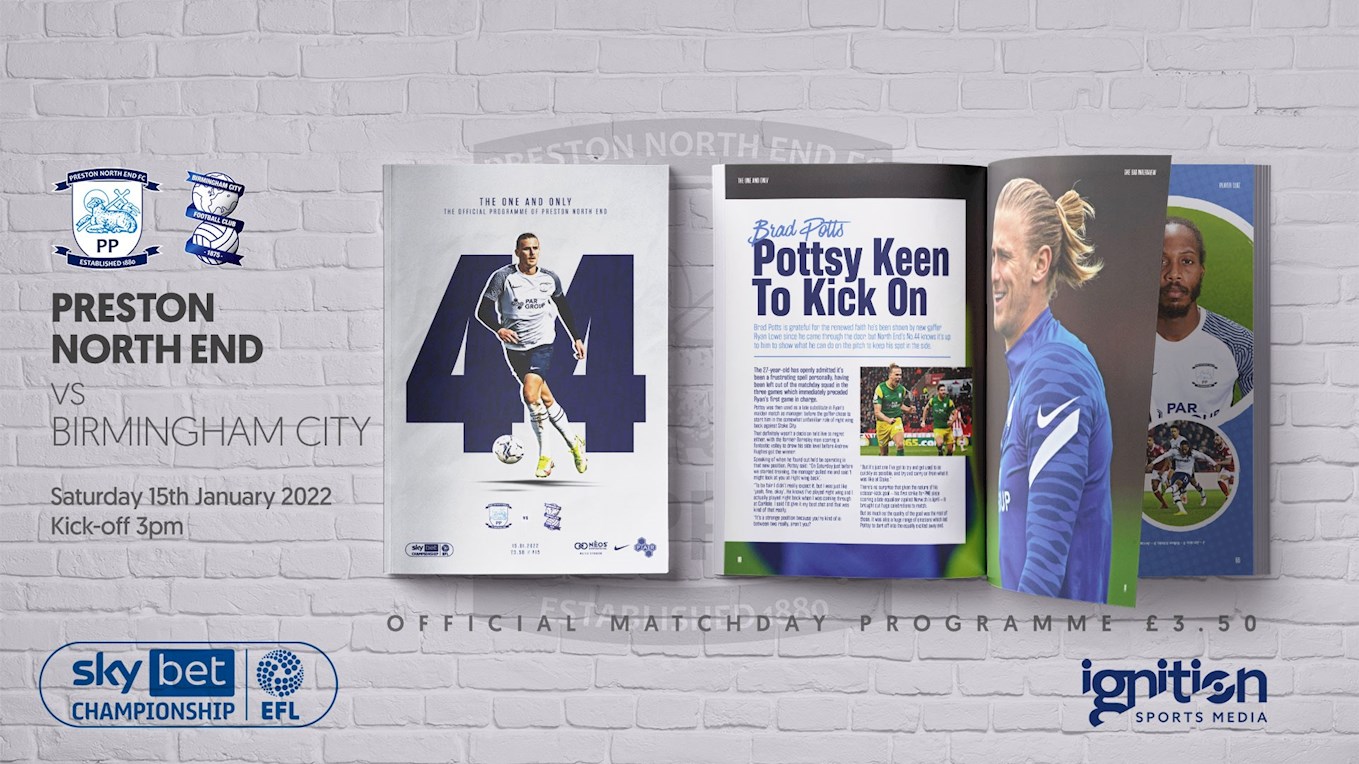 Our cover star and featured interview in this weekend's edition of The One And Only is Brad Potts, who discusses his return to the starting XI, his eagerness to impress and working under Ryan Lowe.

Also in this issue, Emil Riis answers your questions, Josh Harrop picks his dream dinner guests, Joe Rafferty tells us his favourite things and Ched Evans recalls the best game of his career.

Pick up a copy from around the ground on Saturday for £3.50, or you can order straight to your home here.

Tom Barkhuizen and Matthew Olosunde, who missed the weekend’s defeat to Cardiff City, are fit and training ahead of this game.

Midfielder Josh Harrop made his first appearance for PNE in over a year on Sunday, coming off the bench to play over 40 minutes, and he will be hoping to be part of the matchday squad again against Birmingham.

Ryan Lowe also confirmed pre-match that long-term absentee Izzy Brown is not expected to be back fit and available this season.

Birmingham City currently sit 18th in the Championship table, four points below PNE and eight above the relegation places.

In the dugout for Blues will be head coach Lee Bowyer, in his first full season in that role, having taken over in March 2021 and enjoying a positive end to the campaign.

His side have been hit with a few recent blows personnel wise, having lost goalkeeper Matija Sarkic through injury and Riley McGree to parent club Charlotte FC, while defender Teden Mengi has been brought in on loan from Manchester United.

Birmingham City are going through a difficult spell of late, having won just once in their last eight Championship games, picking up just five points in that period.

Striker Scott Hogan is Blues’ top scorer so far this campaign with six goals. The Irish forward netted a hat-trick against PNE in 2016, but hasn’t scored against the Lilywhites in his last seven meetings with North End.

Recent history suggests games between these two don’t tend to involve too many goals, with five of the last seven meetings ending in wins-to-nil.

PNE had to settle for a point against Birmingham City at St Andrew’s back in September 2021.

Troy Deeney hit the woodwork in the game’s early stages, while North End’s best chances fell to Sean Maguire and Josh Earl in the first half. 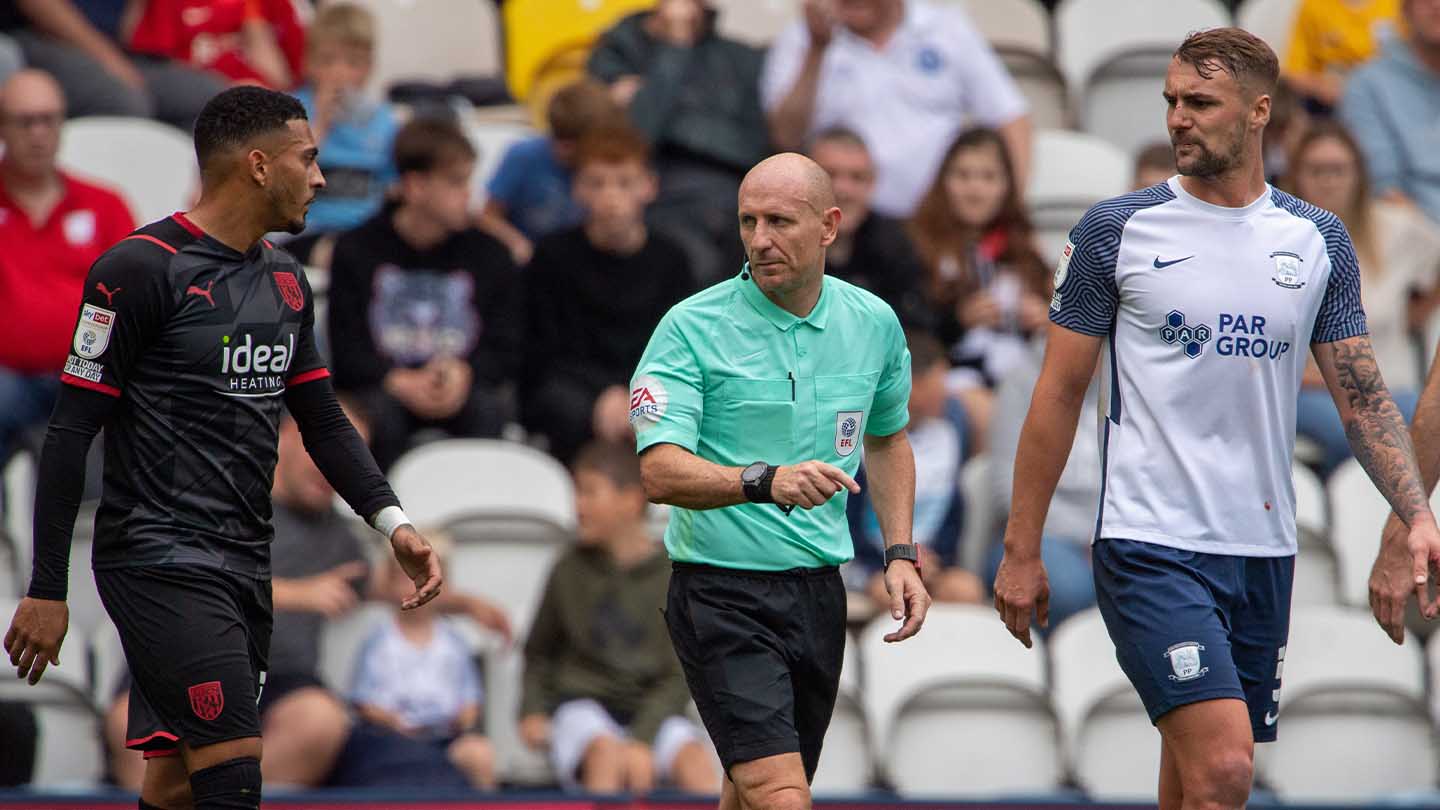 Andy Davies will take the whistle on Saturday afternoon, refereeing a PNE match for the second time this season. His previous game was the 1-1 draw at home to West Bromwich Albion in September.

Davies has taken charge of 21 matches so far this term, showing 55 yellow cards in that time and one red.

The referee will be assisted by James Wilson and Richard Wild, while Martin Coy will be on fourth official duties.

Preston North End were pegged back late in the game against Birmingham City as Scott Hogan earned a point for his side.

PNE took the lead shortly after the half-hour mark courtesy of Patrick Bauer, but he may not have known too much about it, with the ball deflecting off his foot as Alan Browne drove a low effort goalwards.

North End were the side on top for large periods, but substitute Hogan headed home in the 86th minute to claim a late point for the visitors.

It was North End who started on the front foot and they would have been frustrated not to have taken the lead, with Andrew Hughes heading wide unmarked from eight yards inside the opening ten minutes of the game.

Emil Riis did find the target with a header of his own shortly after, on the end of a good cross in by Greg Cunningham, but goalkeeper Neil Etheridge was equal to it.

Etheridge was involved again on 27 minutes, as he came rushing out to head away Ched Evans' through ball for Brad Potts, and it fell to skipper Browne, who tried his luck first time with a speculative effort from all of 40 yards, however it landed just wide.

Browne’s effort four minutes later ended in a goal, though, as he struck a low effort through a crowded penalty area and, on its way to goal, the ball took a nick of Bauer before beating the ‘keeper.

That gave the Lilywhites a half-time lead, which was almost cancelled out within minutes of the second half, as Jordan James hit a powerful effort towards Daniel Iversen’s goal, which Ben Whiteman threw himself in front of to head over the bar.

There weren’t too many chances of note in the play that followed, until on 64 minutes, when Cunningham sent a whipped cross in from the left for opposite wing back Brad Potts to meet, but his volley was kept out by Etheridge.

Not too long later, it looked as though Daniel Johnson would have a chance to go one-on-one with the goalkeeper as Riis beat his man and looked to play through North End’s No.11, but his pass was cut out before it could reach the attacking midfielder.

That was the first of a flurry of chances which followed for PNE, one of which saw Whiteman’s cross looking for substitute Sean Maguire float all the way to the back post where Etheridge was forced to tip wide.

North End then broke through Maguire and he played through Evans, who cut back on to his left foot, but saw his shot saved.

The home side were made to pay for those missed opportunities late on in the game, as Hogan headed home a cross from the right to earn a point for the Midlands side.