Preston North End will look for a first victory over Tottenham Hotspur since 1966 when the Premier League side come to Deepdale for FA Cup fourth round action this weekend. 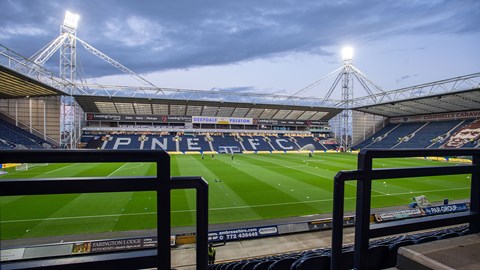 Tickets remain on sale for this fixture for supporters registered on the club’s database before Monday 9th January 2023, and they can be purchased online from www.mypne.com, in person from the ticket office and over the phone on 0344 856 1966.

Please be aware, this game is not included in your season card and therefore tickets must be purchased separately. Tickets can, however, be loaded onto your season card so there will be no need for a paper ticket, unless specified in your booking confirmation.

The fan zone will be open to PNE supporters from 3pm, with live music and food and drink on offer before the game, while it will also reopen after the match, with full information and timings to be found here.

Tyrers' matchday shuttle bus service will be running from Leyland through Bamber Bridge, with £5 return tickets available upon boarding. Timings for the service can be found below.

FA Cup fixtures are unable to be streamed live on iFollow, however the match is being shown live on BBC One in the UK, with coverage starting at 5.40pm.

The game is also available to watch on several different channels around the world, therefore supporters are advised to check their local TV listings.

Audio commentary will be accessible as usual on iFollow, however only audio monthly passes can be bought, with match passes unavailable for FA Cup fixtures. You can subscribe here.

PNE will be without loanee Troy Parrott for this fixture, with the forward unavailable for selection against his parent club.

Liam Delap is also unable to feature, having represented Stoke City in their third round victory over Hartlepool United.

Ryan Lowe confirmed, however, that Ben Whiteman and Brad Potts were back in training, and therefore should be in contention to feature. 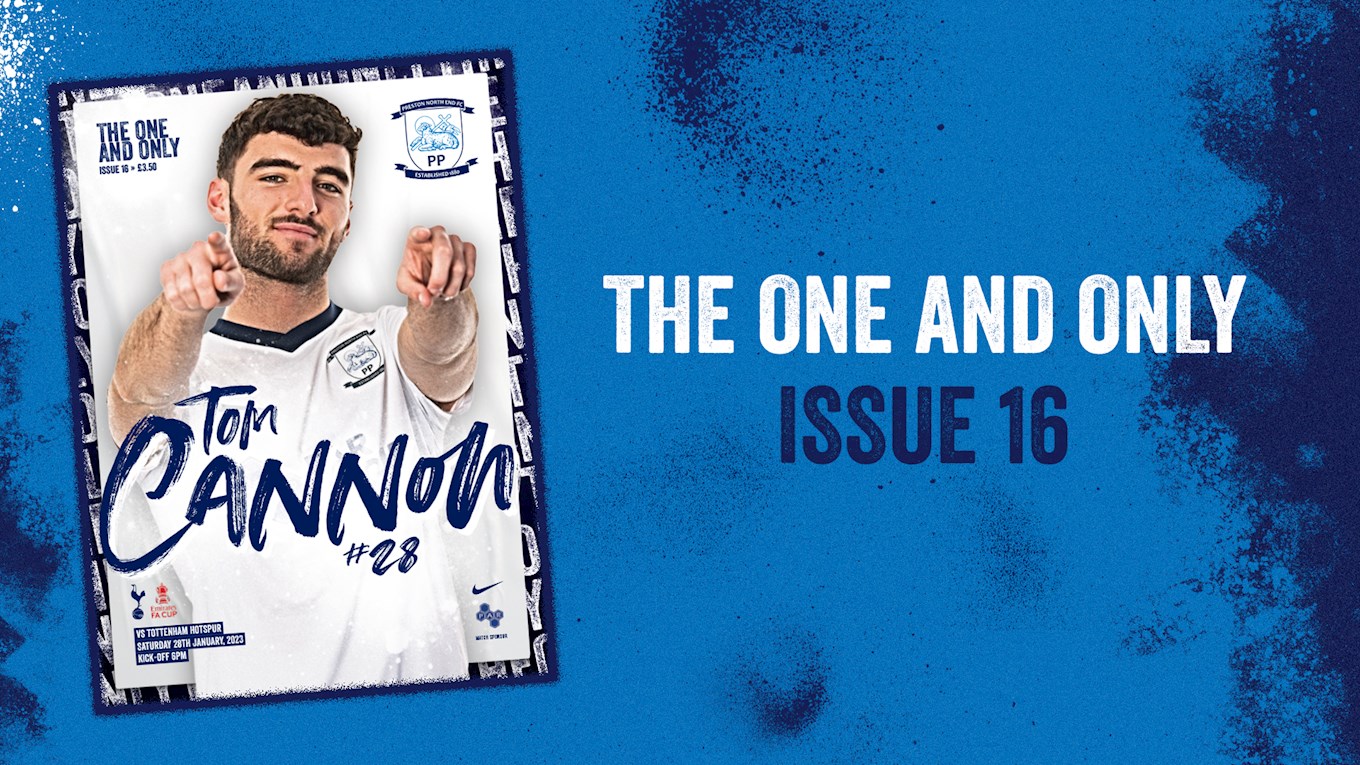 Tom Cannon is the featured interview in our matchday programme, The One And Only, for Saturday's Emirates FA Cup clash against Tottenham Hotspur.

The young forward, who joined on loan from Everton earlier in the month, discusses the game against Spurs, how he's enjoying his early days at PNE, while Tom also tells us more about his journey through the Toffees' Academy.

You can pick up a copy from around the ground on Saturday for £3.50, or alternatively order a programme to be delivered to your door by clicking here. 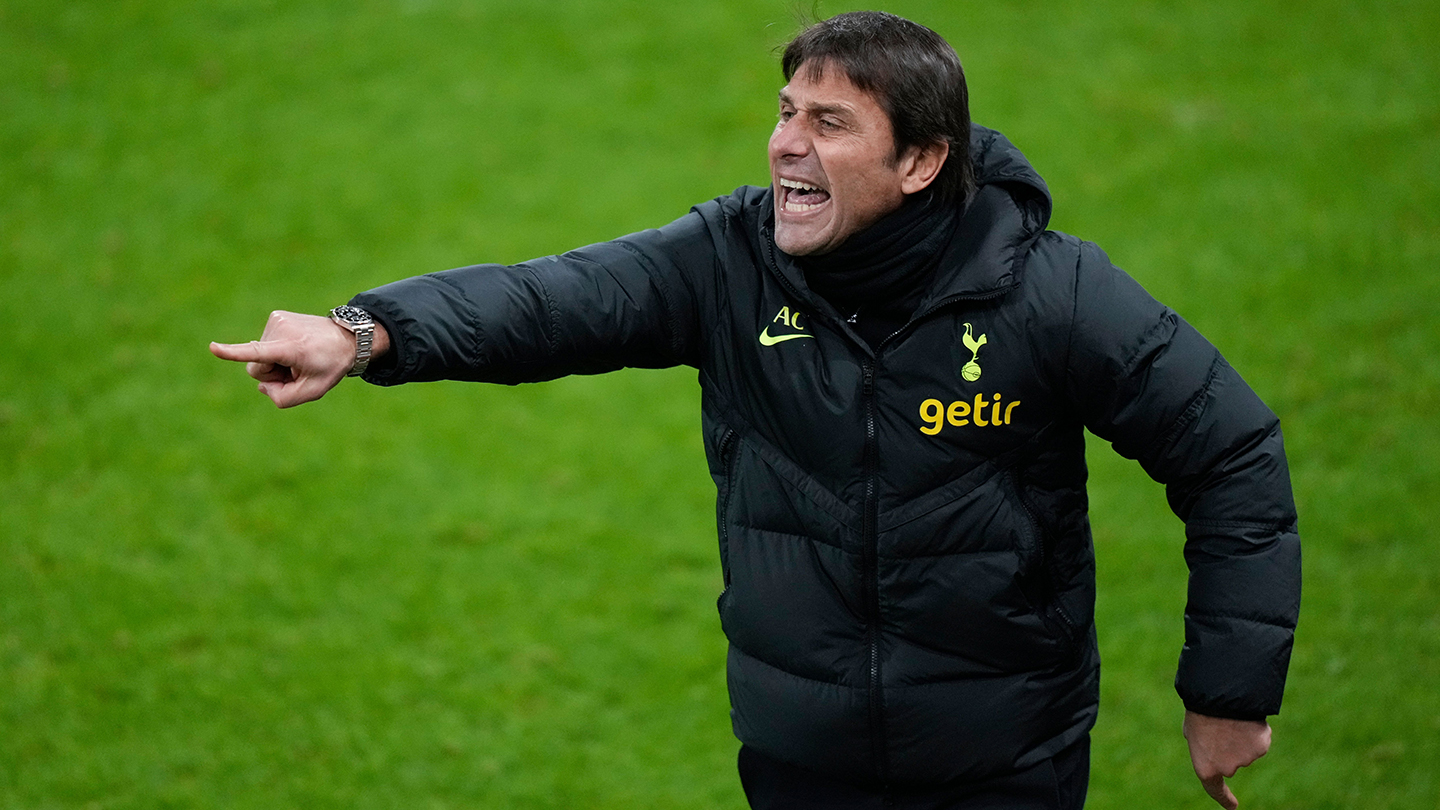 Tottenham Hotspur – who currently sit fifth in the Premier League table – booked their place in the fourth round of the FA Cup thanks to a 1-0 victory at home to Portsmouth.

Since that game, Spurs have suffered defeats to the division’s top two, Arsenal and Manchester City, before beating Fulham at the beginning of the week.

Antonio Conte will be keen for his side to progress in the competition, having been knocked out of the Carabao Cup at their point of entry, as Spurs look to add their first silverware since their League Cup success in the 2007/08 campaign. 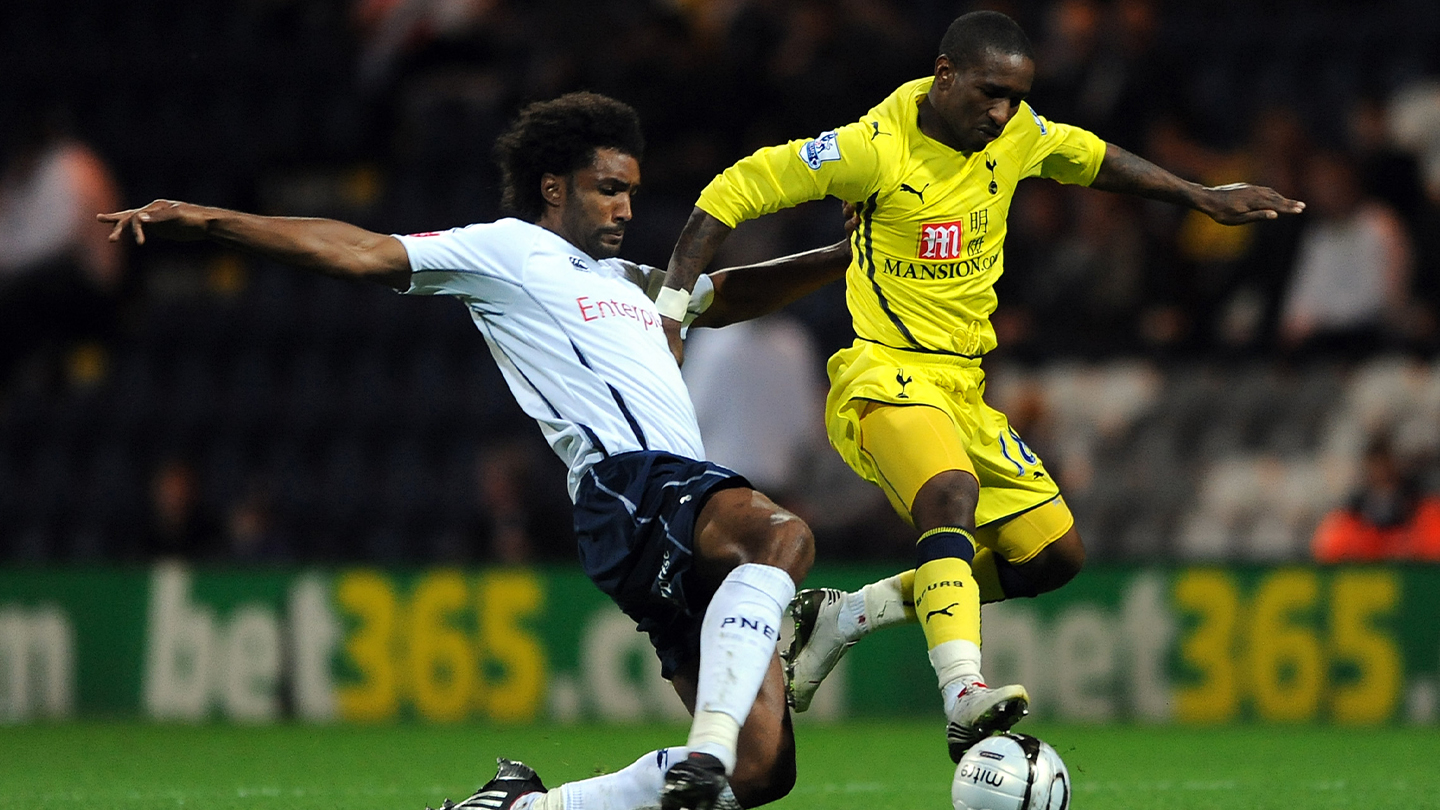 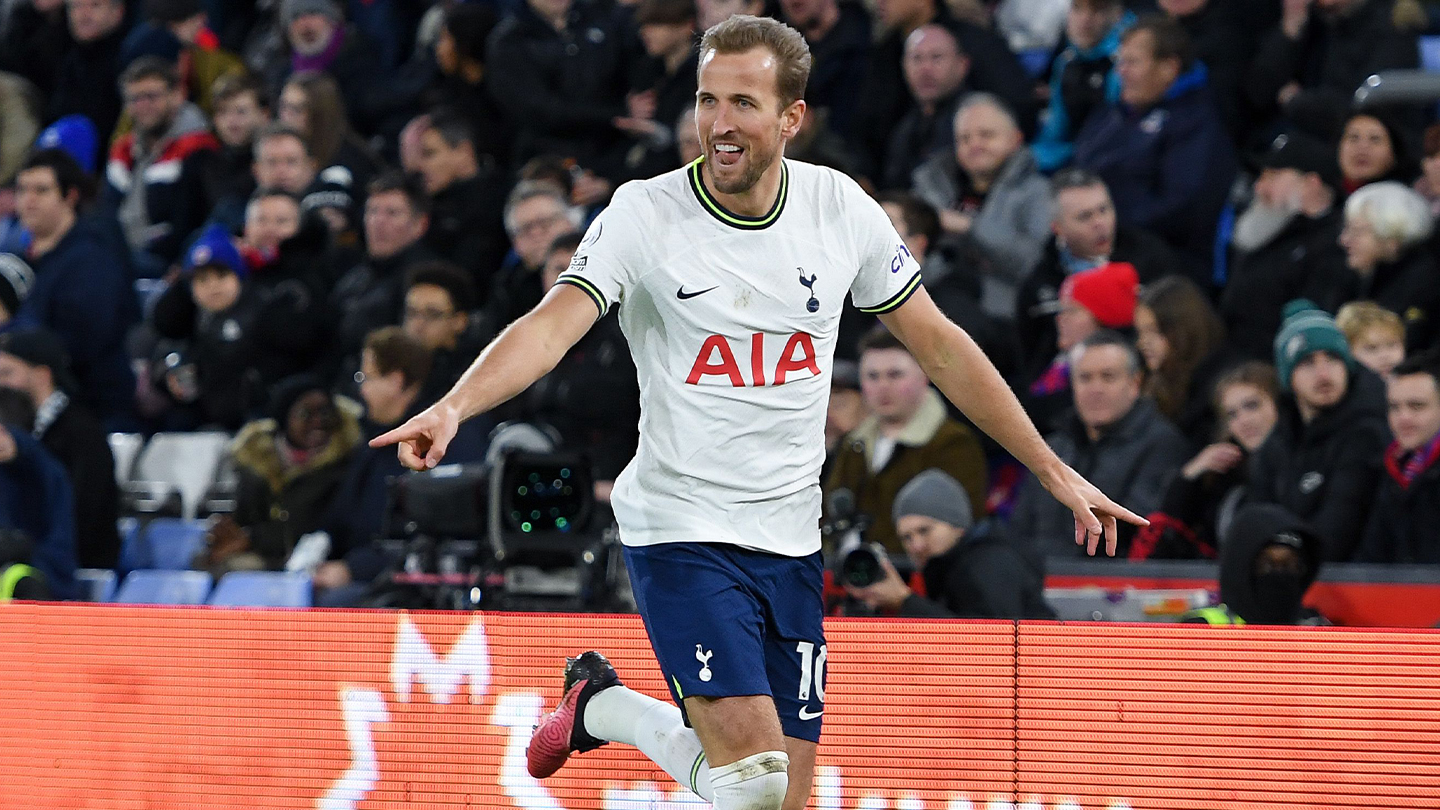 All eyes – even more than usual – will be on Harry Kane this weekend as he looks to become Tottenham Hotspur’s top goalscorer of all time.

The striker, who is also England’s joint-top scorer in international history, was said to have levelled Jimmy Greaves’ famous record of 266 goals for Spurs earlier in the week.

However, two goals which Greaves scored in the Charity Shield seem to have been left out of the legend’s tally and there is some dispute regarding whether or not these should count.

So, depending on who you ask, it will take either one or three goals for Kane to break free as the club’s top scorer but, either way, it appears just a matter of time. 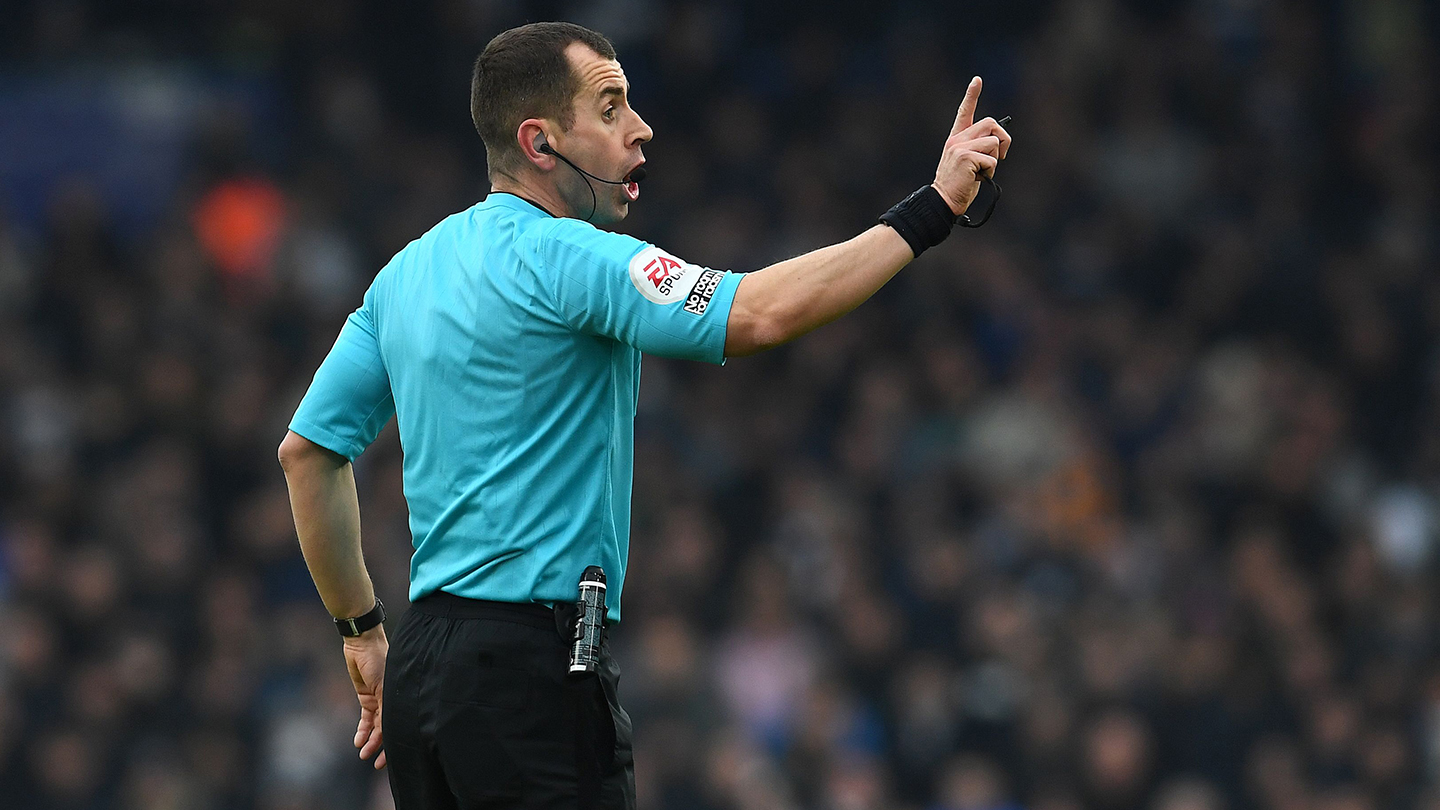 Experienced referee Peter Bankes will take charge of his second fixture at Deepdale this season on Saturday.

Bankes, who officiates in the Premier League primarily, refereed the 1-1 home draw against Burnley earlier this season, and his only previous experience of taking charge of a PNE game in the FA Cup was back in 2018, when North End won 5-1 at Wycombe Wanderers.

So far this season, Bankes has shown 87 yellow cards and one red in 20 games, with that sole dismissal being Nottingham Forest’s Orel Mangala, incidentally in a match against Spurs.

Preston North End were knocked out of the Emirates FA Cup at the fourth round stage following a 3-0 defeat at home to Tottenham Hotspur.

After a first half which saw PNE restrict their Premier League visitors to very little, Heung-Min Son came up with two goals in the second 45, before Arnaut Danjuma made it three to secure his side’s passage to the next round.

North End gave a good account of themselves on the night, though, in a packed-out Deepdale, defending well and enjoying spells of pressure in the second half.

Ryan Lowe made just two changes from last weekend’s victory over Birmingham City, with Ben Woodburn and the cup-tied Liam Delap being replaced by Ben Whiteman and Ched Evans.

Spurs on the other hand opted to make seven changes from their previous Premier League game, however there was still plenty of quality on show, with the likes of Dejan Kulusevski and Son starting in attack.

From the off, it was Antonio Conte’s side who saw most of the ball – as could perhaps be expected – but PNE defended well to limit them to very little in front of goal.

On seven minutes, there was nearly an opening for Kulusevski, but Ryan Ledson was there to throw himself in front of the 12-yard effort, while Freddie Woodman was called into action soon after by Son, saving down to his left.

At the other end, North End’s first real chance of note fell to defender Andrew Hughes in the area, who struck a fierce volley goalwards, only to see it blocked at close range.

Woodman again denied Son on 25 minutes, this time tipping his 30-yard strike over the bar, and the ‘keeper wasn’t needed for Spurs’ next meaningful shot by Kulusevski, which was too high to trouble the goal.

Ryan Lowe will have been asking for more of the same from his side in the second half, but the deadlock was broken just five minutes in, when Son found the bottom corner from more than 25 yards with a powerful left-footed effort.

North End rallied after the goal and enjoyed a really positive spell which helped to turn the volume inside Deepdale right up, and the stadium would have erupted if Whiteman’s strike from the edge of the box just after the hour mark had curled the other side of the post.

Spurs held on during that period, though, and went down the other end to almost double their lead, only for Woodman to tip Ivan Perišić’s header over.

Their second of the night did arrive shortly after through Son, who received the ball with his back to goal 18 yards out, before making room for the shot and firing beyond the reach of Woodman.

It looked as though the game was going to play out from that point, until substitute Danjuma – on his Spurs debut – added some gloss to the scoreline in the 87th minute, finding the bottom corner to seal Spurs’ place in the fifth round.

Tickets are now on sale for our Emirates FA Cup tie against Tottenham Hotspur to supporters registered on the database before Monday 9th January 2023.

Preston North End will host Antonio Conte’s Premier League side at Deepdale on Saturday 28th January, with kick-off at 6pm, in the fourth round of the competition in front of the BBC One cameras.

Standard matchday prices apply for this fixture, with pricing details to be found here, and you can buy your ticket now from www.mypne.com, in person from the Deepdale ticket office or over the phone on 0344 856 1966.

Supporters looking to purchase tickets in hospitality can find full details regarding the packages available for this fixture here, while you can contact the commercial team on 0344 856 1960 or email commercial@pne.com for more information.

Car parking is also available for this fixture, priced at £15 per space. Please note, the deadline has now passed for seasonal car park pass holders to claim their space for free, with these now on general sale. 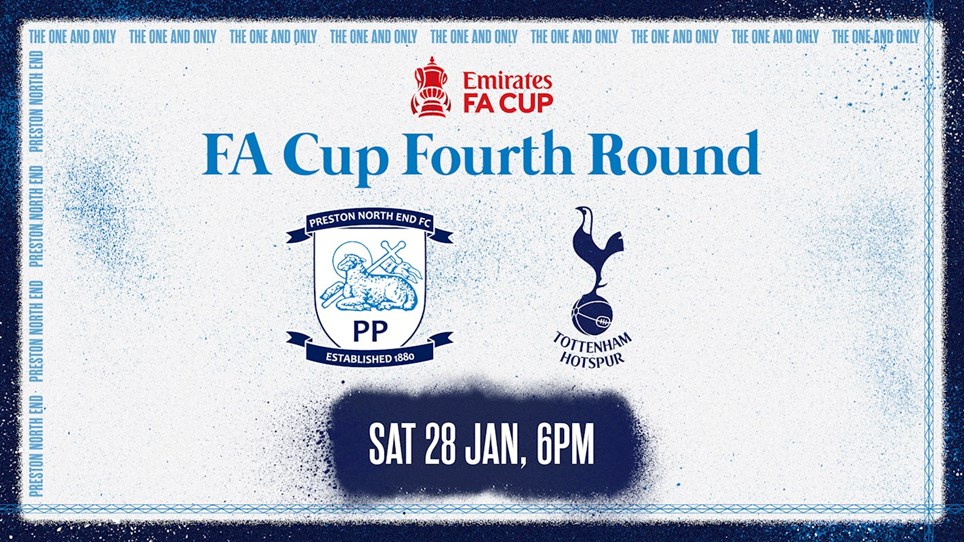