Another Jack Baxter thunderbolt salvaged the youth team a 1-1 draw right at the death of their season-closing derby against Blackpool.

Emil Jaaskelainen’s conversion of Sean Graham’s low cross just before the break looked to have been enough for Blackpool to win it, but up stepped Baxter two minutes from time, fresh from finding the net from his own half last time out, to hammer into the top left corner from distance.

North End made four changes from that Lancashire FA Professional Youth Cup final clash, Lewis Simmons back from illness and Josh Pollard stepping up from the bench, with trialists Max Broughton and Eyad Hammoud completing the line-up.

Blackpool could have taken a ninth-minute lead but for Louis Potts, who blocked a Jaaskelainen header on the goal line.

Potts was then almost in at the other end, following some bright play from Hammoud to rob Blackpool ‘keeper Harvey Simson of possession, but he couldn’t pick out his strike partner waiting in the box, the trialist then running just behind Lewis Simmons’ through ball into the area.

Adam O’Reilly, the scorer of another fabulous goal four days previously, looked to forge an opening for the hosts with his left-footed drive over the bar, before silkily beating his man down the right and picking out Potts at close range, who couldn’t control his effort which edged wide.

The visitors took the lead six minutes before half-time. A cross-field pass found Graham in space on the left flank, allowing him to cross low to the back post where Jaaskelainen rushed in to tuck home first time beyond goalkeeper Jimmy Corcoran. 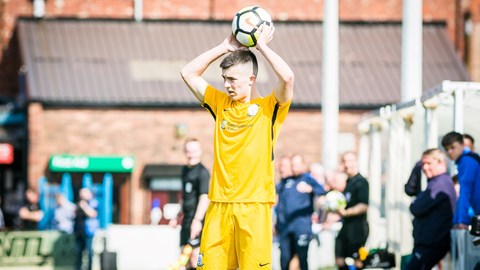 That set up a cagey second half’s worth of action, Jaaskelainen’s optimistic try from an overhead kick a rare attempt for either side.

Tyrhys Dolan had been one of two changes at the interval for North End, Precieux Ngongo also on for the second half, and he combined well with Jolly ten minutes after his arrival but his team-mate crossed tamely for Simson to gather.

Owen Watkinson headed comfortably over, while Broughton couldn’t get a corner under control to shoot at the back post.

Lewis Coulton was moved into a more advanced position amid a couple of changes for PNE and looked a menace on the left flank, with his cross cleared ahead of Potts, before a strike of his own flashed just wide.

The game appeared to be petering to a close as Corcoran got down well to deny Blackpool substitute Henry Weston before Baxter rescued a point for North End, almost out of nothing.

His 88th-minute strike was a wonderful one, playing a quick one-two with Dolan from a free-kick and unleashing a fierce strike into the top left corner from over 30 yards out.

That was the 18-year-old’s 11th goal of the season, drawing him level with Ethan Walker for the youth team’s end of season goalscoring charts.

And Academy manager Nick Harrison was again full of praise for Baxter when speaking to the club website after the game.

“It was an unbelievable goal again,” said Harrison. “It was a good bit of play and thinking from Jack to play it short, we’d been putting a lot of balls into the box and not getting a lot of joy. He just bounced it off Tyrhys [Dolan], took a couple of touches and it’s a great strike.

“I think he’s got that in his locker and if you look at his goals, a lot probably have been penalties – he is our penalty taker – but he’s scored goals outside the box and even if you’re a holding midfielder, it doesn’t mean you can’t join in with play or be in and around it.

“That’s what we know about Jack Baxter; that’s what he can do and I think he’ll continue to do that throughout his career.

“He’s a very clever player, he reads the game well, he’s technically very good and he’s got that execution to score goals.”

On the game itself, Nick felt his side were worthy of the point which means North End can finish no lower than fourth in the North West Youth Alliance league.

The Lilywhites currently sit third in the standings but other sides still have matches to complete.

“I think it was a proper derby game and Blackpool were well up for it,” Nick continued. “I thought we conceded too many corners, which put the pressure on ourselves a little bit. Other than that, I don’t think they caused us too many threats other than from those set pieces.

“As the game went on, I thought we had some of the better chances. We’ve had a couple go across the box and Adam O’Reilly got in behind. I think we deserved a point and we could even have won it in the end.”

Reflecting on the campaign as a whole, Nick has been pleased with how his side have performed, with runs to the latter stages of the FA Youth Cup, Youth Alliance Cup and Lancashire FA Professional Youth Cup to go alongside their league position.

More importantly for the Academy manager, however, has been the progress made by a number of the club’s young scholars.

“It’s been an exceptional season. We’ve seen Ethan Walker and Adam O’Reilly make their debuts and Jack Baxter has been in and around the first team squad again.

“We’ve had a couple of lads who over the Christmas period have experienced what it’s like being in the first team environment and ultimately that’s what we’re all about.

“We’ve got to try to give lads that exposure and we’ve got some good players here, but they’ve got a lot of work to do to get to that next level.”