Lewis Simmons and Louis Potts became the seventh and eight different scorers for the youth team this season as they beat Port Vale 3-0 in their first Youth Alliance Cup group game.

Darren Brannigan was first on the scoresheet inside the opening quarter of an hour, Simmons doubling the advantage in style with fewer than ten minutes until the break and Potts completed the scoring with 20 minutes remaining.

The perfect start for #PNEU18 in the #YouthAllianceCup yesterday! 👏#pnefc pic.twitter.com/VRi3ibi2vK

After a fairly low-key start to proceedings the hosts began to take control as Jerome Jolly’s pass split open the Vale defence early on to send Potts through, only for goalkeeper Mawgan Blight to save with his feet.

Just two minutes later, North End took a 13th-minute advantage. Jolly exchanged passes with Josh Pollard down the left and crossed to Brannigan from the byline, the striker turning his defender on the edge of the six-yard box and poking into the far corner.

Joe Berks curled over from 20 yards at the other end with Tyler Williams doing well to outmuscle Maxwell Chimenes in the box moments later to prevent him from shooting.

James Cottam was forced into an important double save just before the half hour when he denied Chimenes with his feet from close range and then smothered Jack Wakefield’s rebound.

Both sides then had opportunities in quick succession as Brannigan took down Pollard’s chip into the area and shot wide on the bounce, while Hayden Campbell found Lucas Green-Birch who fired over.

The hosts finished the half strongly, boosted by Simmons’ superb effort to make it 2-0 on 37 minutes. 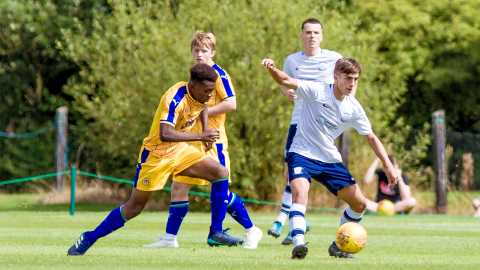 Simmons Happy To Contribute At Both Ends Of Pitch

Jolly had miskicked Potts’ cross on the edge of the box but Brannigan salvaged the attack down the right and teed it up perfectly for Simmons at full pelt, his run culminating with a first-time curling shot which was destined for the top left corner from the moment he hit it.

Brannigan might have doubled his tally in the next attack when he stretched to get onto the end of Brian McManus’ cross but volleyed wide.

Jolly had a shot beaten away by Blight late in the half and Jack Baxter’s rebound trickled just wide.

The visitors threatened to mount a comeback early in the second half when Chimenes lashed wide of Cottam’s near post before North End resumed control.

Jolly swung wide from Jack Armer’s cross before Baxter’s effort was sent wide by Blight’s legs, Charlie Lyons having his header saved from the subsequent corner before nodding into the side netting from substitute Ethan Walker’s free-kick.

Potts made it comfortable on 70 minutes when he robbed possession from a Vale centre-back 20 yards from goal, charged into the box and finished low beyond Blight in composed fashion.

Vale substitute Nelson Aikpitanyi had a half-hearted penalty appeal dismissed while Jolly set up Potts and then Walker in the same position down the left side of the box, both missing the target.

Walker drifted inside from the left and drew a simple stop from Blight while Cottam saved Campbell’s speculative effort at the second attempt, the nearest the visitors came to reducing the deserved three-goal margin of the young Lilywhites’ fine victory.

Academy manager Nick Harrison’s only minor disappointment was that his side did not convert more of their chances on goal.

“We’re delighted to win the game because it’s a cup competition and although we’re a part of a group, we wanted to treat it like a knockout competition, so it was important that we won the game,” said Harrison.

“I thought we played well in most parts of the game and we said to the players at the end that we’re delighted they’ve kept a clean sheet as well because we haven’t done so for some time. We controlled the game, our possession was very good and we created numerous clear cut chances.

“The players showed that they really wanted to win the game, the only frustrating thing is that we’ve only won the game 3-0 when we’ve had a lot more clear cut chances that we’ve got to be more clinical with.”

Expanding upon that point, Harrison said his players would continue to work on converting their chances and that the approaching midweek game away to Shrewsbury Town, back in league action, would provide an opportunity for them to show a greater ruthlessness in front of goal.

“We have to remember that these are young players who are still learning and developing, and we have to help them to do that,” he continued.

“The goals we scored were very good but we’ve counted that we’ve had 12 clear cut chances from almost inside the six yard box and we’ve not scored. We were delighted to win 3-0, we’ve scored three goals and kept a clean sheet but I certainly feel we should’ve won it by a lot more than that.

“We just want to challenge the players when they have the opportunity to score more to do that and that’s what we will continue to strive for.

“I’m sure the players will already be looking forward to Wednesday and we’ll have a few training sessions before that game, so we’ll keep working hard with the players to improve and hopefully then the things that we’ve talked about and showed them on the video, they can put right in the next game. That’s certainly the approach that all the players need to have.”