The youth team were beaten on penalties by Bury in their Youth Alliance Cup northern quarter-final, following a 1-1 draw in 90 minutes at UCLan Sports Arena.

Adam O’Reilly cancelled out Jack Hatton’s opener and although James Cottam saved the first of Bury’s spot kicks, PNE couldn’t repeat their 12-yard heroics from the midweek win over Charlton Athletic at Deepdale as the Shakers, who finished with ten men, progressed 4-3 on penalties.

Cottam was one of three changes from that last outing in the FA Youth Cup third round, the other two enforced, as Josh Pollard and Brian McManus came in for Jack Baxter and Ethan Walker, who were among the travelling squad for the first team’s trip to Nottingham Forest. 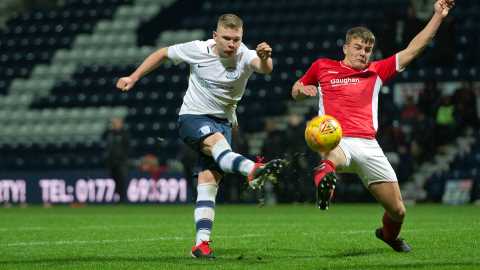 Walker Nominated For LFE Goal Of The Month

Neither side ever truly found their rhythm in a game of few clear opportunities, although there was almost an opening for the visitors inside five minutes with Femi Seriki looking set to pounce on a loose ball, Cottam gathering while Lewis Simmons skewed well over at the other end.

Joe Adams’ free-kick from deep curled across goal and into Cottam’s grasp, Tyrhys Dolan then going up the other end to cut inside from the left and register the game’s first attempt on target, Bury ‘keeper Scott Moloney untroubled with the effort right at him.

The away side went one better with their first shot on goal, as Hatton fired them into a 21st-minute lead. Seriki let Edward Jones’ cross run for the full back bombing down the right, and after taking it down on his chest, he connected beautifully on the half volley to find the far, top left corner.

Jack Armer nodded a Jerome Jolly free-kick wide just before the half hour, his set piece delivery proving a great weapon for North End throughout the contest, although he couldn’t adjust himself to head Dolan’s cross late just before the break.

But in the second half North End looked menacing going forward and that told almost straightaway in the 49th minute. And it was from a Jolly free-kick, after Louis Potts was brought down in midfield, that O’Reilly glanced a header into the bottom corner to equalise for the hosts.

Joe Lilley and Seriki’s one-two was thwarted by the defensive work of Armer and Lewis Earl moments before proceedings looked to revert to the gritty, battling kind of the first half.

Chances arrived at a premium but one did fall at Potts’ feet 20 minutes from the end, Jolly’s free-kick deflecting kindly in his direction, but the forward struck the bouncing ball into the side netting.

Joes Rodwell-Grant and Nolan entered the fray late on for PNE, who had the better of the play in the dying moments, Jolly’s dead ball delivery looking as though it could’ve made the difference.

North End’s No.7 for the morning drew a brilliant diving save from Moloney five minutes from time with his 20-yard curler, fizzing another free-kick marginally wide in the first minute of added time, following a cynical foul on the edge of the box.

Bury were reduced to ten men in stoppage time as Sam Allardyce caught O’Reilly with a two-footed challenge, the defender having first been carded fewer than ten minutes beforehand.

There was little time for PNE to profit from their man advantage, however, with a second shootout in as many games ultimately required to settle this tie. The hosts initially edged ahead, as Cottam made an excellent stop to deny Edwards, after Armer had converted for Nick Harrison’s side.

O’Reilly and Nolan followed that up with successful efforts of their own but two misses from PNE players set up a decisive kick for Adams, his effort beating Cottam for the visitors to take it 4-3 and seal a northern semi-final berth.