Midfielders Jack Baxter, Josh Pollard and Adam O’Reilly found the net as the youth team cruised to a 4-1 win away at Carlisle United.

Baxter’s penalty midway through the first half gave PNE the lead, the second year scholar completing a brace in the second half when he finished off a slick counter attack, with Pollard and O’Reilly having earlier added to the scoreline in quick succession before half-time.

📽 | Another 🔝 performance from #PNEU18 to beat Carlisle United yesterday... 👇@JackBaxter30 scoring the first and fourth, @josh_pollard8 grabbing the second and @Adam_o_reilly the third.

It was a quiet game initially in the way of chances, Ryan Wombell managing to round Cottam down the right side, his cross cleared in the centre by Lewis Coulton.

Lincoln McFayden had an effort blocked from a free-kick down the other end, the lively Pollard driving into space on the flank soon after with his ball into the centre just behind Brannigan.

However, Pollard wrestled possession from a defender just outside the box in the 22nd minute and when he broke inside the area, he was hauled down as the referee quickly pointed to the spot. Baxter stepped up confidently, placing his penalty into the far left corner inside the same minute.

Adam O’Reilly fizzed a 20-yard free-kick around the wall and on target minutes later, Carlisle goalkeeper Regan Ward holding on at the second attempt.

There was little he could do in the 28th minute, however, as Pollard again showed a cool head in the final third to make it two. He intercepted a loose pass and beat a man on his way into the box before rounding Ward and finishing from the angle.

There was a brief suggestion of a response by the hosts as Lewis Earl slid in brilliantly to halt Josh Galloway’s run, Wombell then curling a low angled free-kick straight at Cottam.

But in the 35th minute, the Lilywhites really tightened their grip on the game with one of their best goals of the season. Some quick passing down the left culminated with Brannigan flicking into O’Reilly’s feet, as he curled a beautiful strike into the top right corner from just outside the box. 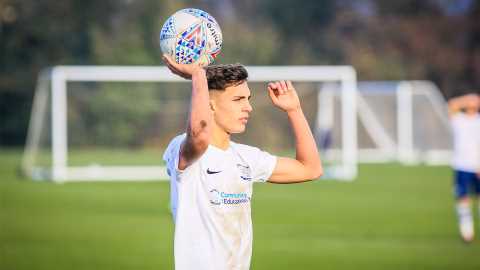 Tyrhys Dolan drew a low save from Ward in the next attack and he was first to try his luck after the break, this time placing wide of the near post having surged down the left.

Pollard might have had a second just after the hour mark when he met Brannigan’s left-wing cross at the back post, Ward reacting superbly to keep out the header.

Baxter did grab a brace, though, completing a stunning counter attack on 65 minutes. Coulton cleared the hosts’ free-kick with Brannigan sending Pollard on his way down the left flank and as his pass across goal found Baxter, he took a touch past Ward and slotted in from a few yards out.

O’Reilly chipped over from distance and Aaron Bennett volleyed over from Baxter’s floated pass, Pollard drawing another late save from Ward with North End looking in complete control – until the very last moments of the game, at least.

Liam Brockbank converted from a low left-wing cross in the 89th minute to deny PNE a clean sheet, Jamie Armstrong also going close with a deflected effort in added time.

That was the only mark against the Lilywhites’ performance, though, as Nick Harrison spoke to PNE.Com about a third win in a row for his young side.

“It was a great opportunity for some of the lads who maybe normally don’t start and that’s what football is all about. It shows the level of players that we’ve got; players who can deal with playing in different positions, as we saw with Tyrhys Dolan and Josh Pollard playing wide.

“All the goals were very good, they all came from us playing some good football on the front foot with some clinical finishing as well.

“Without singling anyone out, I thought it was a really good performance all-round, the lads played well as a team but did their individual roles really well, too.”

And the Academy manager believes the youth team’s recent good form is breeding confidence at the perfect time, with the FA Youth Cup tie against Norwich City now only ten days away.

“It’s all about the performances and we’ve come into the New Year playing on the front foot and playing with some confidence, so long may that continue.

“We want to build a winning habit but we obviously want to perform well and we think good performances will encourage good results. Hopefully we can build on that next week [against Shrewsbury Town] going into the game against Norwich a week on Tuesday.”