An even contest played in difficult weather conditions, Pollard gave the Lilywhites a half-time advantage only for the visitors to score five minutes into the second period.

Although Tyrhys Dolan and Ethan Walker were available to start again, midfield duo Adam O’Reilly and Jack Baxter were not – the former heading out on loan to Hyde United, while his team-mate was in the travelling squad for the first team’s trip to Blackburn Rovers.

And Lincoln McFayden’s sickness in the warm-up meant it was a total of five changes to the team which beat Rochdale last time out – with James Cottam and Joes Blanchard and Nolan handed starts.

Pick that one out! 👌#PNEU18 #pnefc pic.twitter.com/yfxg5rwAVK

It was Dolan who provided the sense of early urgency for the Lilywhites, winning it back just outside the box and driving purposefully into the area, only to scuff his shot with ‘keeper Regan Ward making a simple second-minute stop.

Dolan made another delightful burst forward five minutes later, his run halted but the Lilywhites kept it high up the pitch, Lewis Simmons’ cross deflecting into Walker’s path, whose shot from just inside the area was well blocked.

Taylor Charters drilled a shot straight at Cottam at the other end, the Carlisle midfielder then playing a team-mate into space down the left on 19 minutes, where he struck low against the outside of the near post.

Striker Keighran Kerr might have done better ten minutes before the break when found in the box by Papa Belchior, shooting tamely at Cottam.

It was in the 37th minute that the deadlock was broken, thanks to some Pollard ingenious. A Jerome Jolly corner was twice only half cleared and when it fell at the feet of the PNE midfielder 25 yards out, he took one touch before unleashing a fierce strike into the top left corner.

Cottam saved simply enough from a pair of long rangers before the break, after which wingers Jolly and Walker swapped sides, the former cutting in well but driving his shot straight at Ward.

It was at the other end that the next goal came, however, after 50 minutes. A silky right-wing run from a Carlisle man saw his low cross deflected to Birch on the left side of the area, Cottam getting a hand to his effort, but it still found the far right corner.

PNE could’ve twice retaken the lead, either side of the hour, firstly when Walker attacked the space down the left and his cross was almost headed in by opposition defender Liam Brockbank, his goalkeeper Ward vitally tipping it onto the bar on its way over. 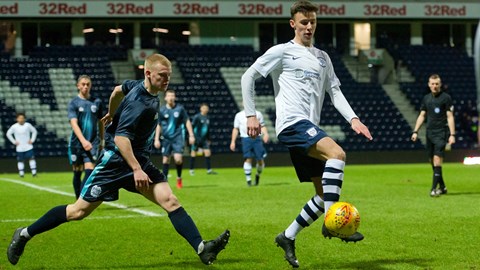 Pollard: "A Difficult Game All Round"

Five minutes later, following some good build-up play involving Darren Brannigan and Walker, a fortuitous touch found Jolly in the box with Ward palming his shot before a defender hacked away.

Inside the final 20 minutes, substitute Louis Potts almost met an inviting Dolan cross, while Jolly curled wide from outside the box, but the game rather lagged to a close.

Cottam saved from Josh Galloway’s free-kick late on and then again with another effort from closer range straight at him in stoppage time.

A point apiece was probably a fair outcome in the end, a sentiment echoed by Academy boss Nick Harrison.

“Under the circumstances, it was a good performance really,” he told the club website. “The weather conditions were horrendous which made it difficult for both teams to try to play any kind of football.

“A draw was probably the right result, both teams had chances to win it but overall, especially with a really young squad, it was a pleasing performance

“What was pleasing about the game was we went 1-0 up under really difficult conditions. Unfortunately, we couldn’t hold onto that lead, but we also didn’t concede a second goal.

“We want the players to win games and play well but if we can’t win then we don’t want to be beaten, which comes in with the performance. We saw a group of young players really determined not to lose the game and we could’ve probably had a couple of chances to win it as well.”

It’s now three games unbeaten for the young Lilywhites and Harrison was pleased for that good form to continue, especially considering the absence of a couple of scholars, which allowed for the inclusion of four schoolboys in the matchday squad.

“It’s always nice to keep an unbeaten run going,” he added. “The best thing about this game was the opportunity it gave to the younger players, which they thoroughly deserve.

“Adam O’Reilly had gone out on loan, Jack Baxter was with the first team and Lincoln McFayden felt sick in the warm-up and so we had to put Joe Blanchard in, an U15 player, at left back. We had a really young bench with a couple of U16 players as well.

“It’s fantastic for the likes of Jack Baxter to be involved in the first team squad and Adam O’Reilly getting the opportunity to go out on loan.

“When they’re not with us – which is ultimately what we want, as we want them to play first team football whether that’s at Preston or out on loan elsewhere – it gives opportunities to other players.

“What’s important then is that these younger players coming in do take their opportunity, because that’s certainly what Adam and Jack have done in their scholarships.”