Jerome Jolly and Tyrhys Dolan scored in either half as the youth team saw off Port Vale with a 2-0 win to make it six matches without defeat.

🎥 | A goal apiece for Jerome Jolly and @TyrhysDolan10 to secure all three points for #PNEU18 against Port Vale with @Ethanwalker_7 providing the cross for both efforts! 🙌#pnefc pic.twitter.com/zw4xD0e54R

Ethan Walker assisted twice on the day, with Jolly on the end of his 17th-minute free-kick and ten minutes into the second half, Dolan converted one of his crosses for a second game running.

Jimmy Corcoran took the No.1 spot again after returning from international duties with the Republic of Ireland U17 team, while U16 midfielder Ben Dooley was handed his first start and Joe Nolan and Darren Brannigan were included in the line-up, having both come off the bench at Tranmere last time out. 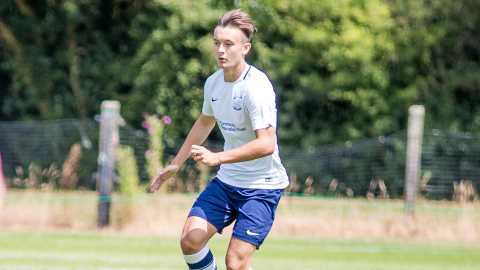 An open encounter largely dominated by PNE saw both Corcoran and his opposite number Mawgan Blight on top form, although it was the Vale ‘keeper kept much the busier.

PNE might’ve breached his goal as early as the third minute when Brannigan headed Walker’s right wing cross over from point blank range, while Hayden Campbell flashed a shot from the edge of the box just wide at the other end.

Brannigan turned cleverly in the area but chose to shoot – his effort blocked – rather than squaring for Walker, and Dooley was inches away from marking his first start with a goal when he met Jolly’s cross with a diving header against the right-hand post.

Only a minute later, North End did take the lead with 17 played. Walker stood over a free-kick on the right, around 40 yards from goal, delivering expertly to pick out Jolly’s leap and his header across goal beat Blight to make it 1-0.

Jolly could’ve doubled his tally within two minutes, curling marginally over from just outside the box, with Brannigan firing over from another low Walker cross shortly after, those openings sandwiched either side of Liam Hickson’s shot straight at Corcoran for the visitors.

The PNE ‘keeper began to see more action, collecting a cross well under pressure from Maxwell Chimenes and standing firm in the way of Finley Jackson’s header, while Blight also saved brilliantly to deny Walker, who had broken into the box at pace, on the stroke of half-time.

The Vale ‘keeper continued to frustrate the Lilywhites after the break, turning Walker’s low drive wide of the far post, following a sublime switch of play from Jolly to play him in, and then keeping out Jack Armer’s long distance drive which looked to be creeping inside the bottom corner.

But Blight could do nothing to prevent Dolan from doubling PNE’s lead on 55 minutes. He started and finished the move by regaining possession in Vale’s half, playing it wide left for Walker and ghosting in at the back post to convert his team-mate’s cross with a tidy first-time finish.

Jolly then shot into the side netting from a tight angle and Corcoran saved brilliantly to keep out Hickson from a similar position, that stop the start of a counter which culminated with substitute Joe Rodwell-Grant’s drive drawing yet more work from Blight to turn it behind.

Lucas Green-Birch came off the bench for the visitors, his fizzing effort from the edge kept out by a combination of Corcoran palming away and substitute Tyler Williams reacting quickest to clear.

Louis Potts also looked lively after coming on, picking out Dolan in the centre with less than a quarter of an hour remaining, his header crashing against the crossbar.

Kyle Johnson headed wide unopposed from a free-kick moments before Corcoran made an excellent one-on-one save against Green-Birch three minutes from time, with Williams again on hand to clear.

Class win today good to get another 90mins ✅ https://t.co/ApOZTzg04Q

Blight’s day was also unfinished, producing one final stop to deny Rodwell-Grant in the final minute and although he had kept the deficit down, PNE had done enough both to secure a deserved win and impress Academy boss Nick Harrison.

“It’s great to get a clean sheet, great to win the game and above all it’s a very good performance, especially in the first half,” Harrison told the club website.

“We should have been 4-0 up by half-time, especially with the chances that we created, they were really good clear-cut chances which we should have scored from.

“We’re delighted with the start we made but we’ve spoken to the players about being more clinical in front of goal to make the game more comfortable so we can enjoy possession a bit more.”

Tyrhys Dolan’s goal took his tally into double figures for the season, the youngster having scored two and assisted two during the six-match unbeaten run the young Lilywhites have put together, with Nick of the belief that that form can only be a positive for all of the players’ confidence.

“We continue speaking with Tyrhys and working with him on the training pitch about getting into good areas, especially inside the box, to score goals because those are the kind of midfielders that everybody is looking for. He needs to do that more and more and it’s brilliant he’s got into double figures, but we expect him to get more before the end of the season.

“We want the players to win as many games as they can because that’s important for them, but we want them to play well, too. Today we got a clean sheet, which we spoke to the players about after we conceded against Tranmere last weekend, so they’re learning and we’ll continue pushing them to improve.

“We’ve got some big games coming up, including a cup final, so winning is really important and the players have to understand that, but above all we want them to perform well.”