Lewis Bradley gave Dale a fourth-minute advantage, but it was a dominant display by the visitors thereafter, Brannigan equalising within ten minutes and Josh Pollard then setting up O’Reilly and Jolly to give the Lilywhites a two-goal cushion at the break.

The North West Youth Alliance’s second-placed side saw plenty of the ball after the interval, but PNE remained strong at the back while retaining a counter-attacking threat, as Brannigan ensured victory with his second of the game, 15 minutes from time.

The Lilywhites were handed a great chance to score inside three minutes, when Dale’s James Nield passing awkwardly back to his goalkeeper Morgan Piper, forcing him to use his hands to prevent an own goal, PNE thus awarded an indirect free-kick on the edge of the six-yard box.

However, it was the hosts that scored directly from that. Adam O’Reilly’s effort was blocked on the line, but Dale broke at pace, Fabio Tavares getting to the left byline and crossing to the unmarked Bradley at the back post who tapped in.

That probably served as Dale’s best opening in a free-flowing first half, the visitors looking strong in attack. Plenty of their play came down the left side, Jerome Jolly’s accurate tenth-minute cross one of many, Brannigan glancing his header wide unopposed at the back post.

The striker should’ve scored again two minutes later, when he was played in by O’Reilly’s exquisite first time pass, but lobbed over the bar.

It was a case of third time lucky for the frontman who did level matters after 13 minutes. Jolly again provided the delivery from the left, Pollard unable to get a touch but Brannigan was running in just behind to hammer past Piper for the equaliser.

And on the half hour, O’Reilly completed the turnaround. Jolly’s cross kickstarted the move again, finding Pollard at the back post to touch first time into the Irishman’s path, Piper getting a touch on his left-footed strike from the edge of the area but unable to keep it from finding the bottom corner.

There were a few iffy moments late in the half as Tavares pressed North End’s Jimmy Corcoran, the goalkeeper twice needing to be quick off his line to mop up, while Jolly could only shoot straight at Piper from ten yards at the other end.

But in first half stoppage time, Jolly did get his goal. After Jack Baxter’s interception in midfield, North End moved it forward quickly with Pollard crossing from the right to find Jolly on the far side, who headed across goal to find the bottom right corner.

The onus was on Dale to attack in the second half, Tavares having a few early efforts when he headed Joe Dunne’s cross straight at Corcoran, then firing low into the side netting from the angle.

He was also denied a penalty on the hour mark following Lewis Simmons’ challenge in the box. 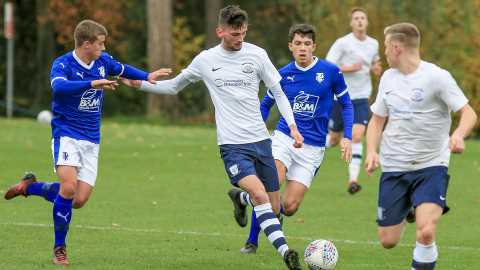 However, the hosts were largely frustrated by PNE, for whom the chances soon fell as the half wore on, Brannigan heading a Jolly free-kick straight at Piper.

The striker did complete his brace in the 75th minute. Substitute Joe Nolan’s pass was perfectly weighted down the right side of the box for O’Reilly, his low strike rebounding off the bottom of the near post but right at the feet of Brannigan to tuck home.

Jolly then drew another save from Piper with a long-range free-kick, Florent Hoti driving over at the end and Nield volleying onto the roof of the net in stoppage time, the hosts unable to pull one back as the Lilywhites secured a fantastic win.

And Nick Harrison was delighted with another impressive showing from his side, this a second win a row after beating Fleetwood last time out.

“On the back of last week, it’s an emphatic result but above all just a good performance,” the Academy manager told the club website. “I thought we created probably five or six really good chances and it could have been 5-1 or 6-1 at half-time.

“I’m delighted with how we played and the chances we created and the way that the players played out of possession; they worked hard and dug in for each other.

“It’s back-to-back good performances, which is the main thing, especially coming off the back of a disappointing result at Deepdale against Bury.

“We’ve wanted to see if the players could learn from that and I think we’re starting to see that and long may that continue. We’ll keep working with the players because we want them to be ready for first team football so that’s something, we’ll keep chipping away at.”

With a slight slope on the pitch, North End turned Dale around at kick-off, ensuring they would kick downhill in the second half, with Harrison’s admitting that last season’s 3-2 defeat at the same venue – when PNE had a two-goal lead at the break – might have had a part in that decision.

“We came here last year and were winning 2-0 at half-time, switched around and then lost 3-2. That might have had something to do with it, it probably does play a part in the game, but playing uphill in the first half, we probably played our best football because it forces you to play.”