Darren Brannigan’s late strike sealed a 2-1 win for the youth team away at Tranmere Rovers and extended their unbeaten run to five matches.

Tyrhys Dolan gave the visitors a deserved lead on the half hour and although Tranmere equalised through substitute Jake Burton with fewer than 20 minutes remaining, PNE also profited from their late reinforcements as Louis Potts set up Brannigan’s winner five minutes from time.

📽 | Tyrhys Dolan and Darren Brannigan were on the scoresheet to help #PNEU18 to a 2-1 win against Tranmere Rovers at the Solar Campus! 👏#pnefc pic.twitter.com/qzzKOROe9U

Following an eleven-day gap since the last fixture against Walsall, PNE’s starting line-up included three changes, James Cottam and Jack Baxter making returns while U16 defender Kyi Nicholson was involved with the youth team for the first time, starting at right back.

The visitors dominated the first half, but Tranmere had the first glimpses of goal. Danny Walker-Rice failed to connect with Nathan Corness’ fourth-minute cross and when that duo reversed roles four minutes later, Lewis Earl outmuscled Corness to prevent him from shooting inside the box.

Jerome Jolly, Lewis Simmons and Jack Baxter saw shots from the edge of the box and beyond narrowly miss the target before Earl stepped up from defence midway through the half with a dizzying run into the opposition area, his strike forcing Tranmere goalkeeper Bayleigh Passant to make his first save.

North End’s opener, which came with half an hour on the clock, was heavily contested by the hosts. The linesman had flagged for offside against a Tranmere forward but with PNE having recovered possession, the referee allowed play to continue and the visitors took full advantage by scoring from the resulting counter attack.

Nicholson won the aerial duel against the offside man, sending it down the right for Walker who set off on a magnificent run and he provided a cross to match, drilling low to the back post where Dolan applied the finish and following a brief discussion between linesman and referee the goal was given.

Walker shot straight at Passant from a tight angle inside the box, while Ben Kerr headed wide at the other end and a handball appeal against Simmons was dismissed before half-time.

There was another chance for Walker within 30 seconds of the second half restart, Jolly winning it back from the hosts’ kick-off and switching it out to his team-mate on the right, who cut inside onto his left foot and shot for the bottom corner with his effort met by Passant’s smart dive.

Tranmere upped their game from there, Kerr’s dangerous cross from the right begging for a touch which did not come before Corness’ overhead kick sailed wide. 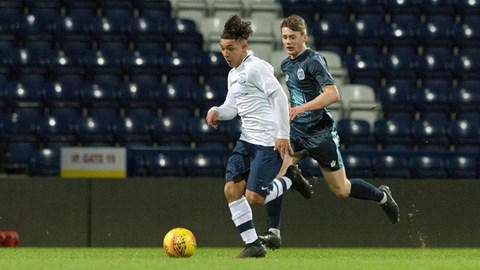 Both sides made key changes on 66 minutes, Nicholson making way after an encouraging debut for Brannigan, who headed wide a good chance soon after his arrival, while Tranmere brought on Demetrius Rhami, Ryan Stratlilis and Burton.

The latter of those, who had glanced a header wide seconds earlier, levelled matters in the 71st minute. George Nugent found himself in tonnes of space down the right side of the area and rolled it across the face of goal for his team-mate to score.

There were additional opportunities for Walker-Rice and Nick Long who both put their efforts wide and crucially, the visitors finished the game strongly and made that count.

The decisive effort came on 85 minutes as Baxter’s exquisite ball over the top found Potts bursting down the right as he rode a challenge to drive into the box and pull it back for Brannigan, whose effort nestled inside the bottom corner.

Tranmere failed to threaten Cottam’s goal in stoppage time as North End sealed the third win of their five-match unbeaten streak, much to the delight of Academy boss Nick Harrison.

“It’s always good to get a positive result and what was most pleasing today was the performance, especially in the first half,” he told the club website.

“I thought we used the ball well and we were quite patient in our play which allowed us to create a number of chances, we just needed to be more clinical especially in the first half because we probably could have – and should have – been two or three goals in the lead.

“But because we weren’t, that put the pressure on ourselves and just made the game a little bit tighter than it should have. When you’re winning 1-0 at half-time, in the second half the opposition are always going to come out and give it a go.

“I think we expected it [Tranmere’s reaction], we talked to the players at half-time about what the opposition might come out and do and it was just a difficult period. When we conceded the goal, the players rallied again and put them back under the pressure and deservedly got the lead.”

Expanding on his side’s response to conceding, Nick was pleased to see two of his substitutes combine for game’s deciding goal.

“I’m really pleased with the reaction because in the first half the players deserved to be winning the game quite comfortably.

“Once Tranmere equalised, the players went about the game in the right way – they didn’t sit back and allow Tranmere to get the winner, we took the game straight back to them and started to open them up a bit more.

“It was a great first touch by Louis Potts [for the winning goal] who is a very direct player – that’s his strength – and when he did that, it’s a great ball into the box and it’s another proper centre forward’s goal from Darren [Brannigan]; good movement and he tucks it away.”