Tyrhys Dolan and Jack Baxter scored their sixth goals of the season, while Brian McManus notched his first for the youth team, as North End’s youngsters saw off Morecambe 3-0.

Dolan headed in two minutes before the end of a quiet opening half, but McManus and Baxter scored inside three second half minutes to add some deserved gloss to the scoreline for a controlling second half display.

🎥 | Some lovely finishing from the #PNEU18 lads against Morecambe with Tyrhys Dolan, Brian McManus and @JackBaxter30 all on target in the 3-0 triumph. 🎯

The celebration from Tyrhys is well worth a watch, too! 👀🤩#pnefc pic.twitter.com/pbagOIqbqW

There were three changes to the side which took on Blackpool from last time out. Lewis Coulton was handed a youth team debut at left back, replacing Charlie Lyons, who has joined Longridge Town on work experience, with James Cottam and Darren Brannigan returning in goal and attack respectively.

The young Lilywhites would have the larger share of possession throughout, although that looked as though it may suit Morecambe judging by the opening moments, with a couple of incisive passes behind the hosts’ backline from Kaleb Young just astray of their intended targets.

Josh Pollard was first to try his luck for North End, striking a loose ball over from 20 yards, while Henry Dorward went one better at the other end by hitting the target, but without troubling Cottam.

And both sides were largely restricted to long shots in a frustrating first half, although PNE had a great chance to take the lead just ten minutes in, as Jerome Jolly crossed to the far post for Louis Potts, who hooked his volley into the side netting.

Baxter curled a free-kick wide moments later and Lewis Earl did well to force Young’s run out of play at the other end. 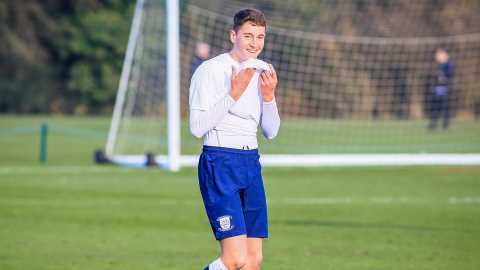 Almost half an hour passed before the Lilywhites tested opposition ‘keeper Ollie Jumeau, although Dolan’s long-range drive was comfortably straight at him.

And with Earl only required to block Amilcar Codjovi’s strike in terms of efforts at goal, the half looked to be petering to a close until Dolan popped up in the 43rd minute.

His goal came after Baxter swung in a free-kick from deep on the left channel, Brannigan managing to scoop it goalwards and Jumeau could only parry as far as Dolan who duly headed home.

North End looked more in control in the second half, dealing well with Morecambe’s threat as they were forced out slightly more, a couple of PNE’s half chances falling to Potts and Jolly, neither of whom could get the ball from under their feet to test Jumeau.

Brian McManus and Joe Rodwell-Grant were brought on just after the hour, the former making an almost immediate impact.

Indeed, McManus made it two in the 66th minute, Jolly sliding him through with only Jumeau to beat, the Irishman applying a cool side foot finish.

And the hosts had another in the 69th minute as Dolan found Baxter in the box with his back to goal, but he managed to weave past a few defenders and tuck inside the bottom corner right-footed.

Aaron Bennet and Tyler Williams joined the fray either side of Rodwell-Grant forcing Jumeau into a strong near post save with PNE cruising, but Morecambe might’ve denied North End their clean sheet in the dying moments.

The forward rounded Cottam but his run was too wide, with Coulton getting back to clear the cross, making sure of a defensive shutout and convincing victory to boot.

Academy manager Nick Harrison was pleased with his side’s response to their loss against Blackpool from last time out.

“Last Saturday, I felt we performed well enough to get a positive result with the amount of chances we had,” Nick told PNE.Com. “What’s pleasing today was that we’ve defended much better, kept a clean sheet and taken our chances.

“We can again say that we could’ve scored more and if we were a little bit more clinical, the scoreline would’ve been much higher.

With U16s Lewis Coulton and Joe Rodwell-Grant and U15 midfielder Aaron Bennet all involved, Harrison felt this game was the right time both to hand those promising youngsters a chance, while also taking some of the scholars out of the action, following an intense few weeks’ action.

“A lot of our lads have done a lot in the last month or so in terms of games and training, so we felt it was the right time to take one or two out of this game by not finishing the 90 minutes.

“We’ve got an excellent group of players coming up behind, from our U14s upwards, who are more than capable of making that transition from schoolboy football to this kind of football.

“We want to make sure there’s always a pathway for them and we thought this was the right game to do that and it was really pleasing for the three young lads who all contributed in the game.

Nick concluded by speaking of the three different players on the scoresheet for North End.

“We’re delighted with all the goalscorers today and we want to continue that – the chances that we are creating, we do need to be even more clinical and finish teams off by scoring even more goals.

“It’s brilliant for him [Brian McManus] to score the goal and contribute that way, he just needs to do that more now – he needs to be an all round midfielder where he dominates without the ball but also from an attacking threat as well.

“Likewise, it’s always good for Jack Baxter to get a goal; he’s capable of that from free-kicks and open play.”