Ethan Walker scored a brace as the youth team finished their Youth Alliance Cup group with a perfect record by beating Notts County 4-1.

Walker struck at the beginning and end of the contest, while Charlie Lyons and Jerome Jolly converted in quick succession either side of the hour to ensure that Kion Etete’s late reply for the hosts was just a consolation.

Brian McManus replaced the injured Adam O’Reilly for North End’s only change from facing Bury last time out as the visitors started typically well given their recent form.

Indeed, the young Lilywhites took the lead with their first shot on target after eight minutes, courtesy of Walker. Tyrhys Dolan set him up, driving forward and sending his teammate into space down the left, where he cut back onto his right foot and shot low into the far-right corner.

Dolan had an effort of his own blocked moments later, after Louis Potts had failed to test home goalkeeper Tieran Brookes from Jack Armer’s inviting centre.

Walker and Dolan reversed roles on 25 minutes as Brooks palmed away the former’s drive from the edge of the box, the Lilywhites’ first goalscorer following in to draw another suberb save from Notts’ ‘keeper, albeit from an offside position.

Charlie Lyons quickly played a free-kick forward for Armer to set up another chance for Walker, who dazzled into the box but skewed over left-footed, Coden Duncan curling straight at Jimmy Corcoran at the other end for the hosts’ first effort on goal just after the half hour.

Lewis Simmons forced Brooks to save from a tight angle before Potts nodded a Walker cross wide, who himself curled a free-kick into the wall for the final chance of the half.

The hosts came out stronger after the interval but failed to forge a clear opening before North End doubled their lead after 59 minutes. 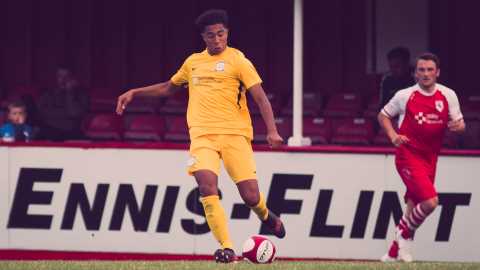 That came from Jolly’s free-kick on the right side, his delivery put into a dangerous area and deceiving a few bodies on both sides before it reached Lyons at the back post, who made no mistake with his header.

Jolly got on the scoresheet himself two minutes later, playing a neat one-two with Walker to take him into the box, where he fired into the bottom right corner.

County rallied again with Duncan’s weaved his way to the angle of the six-yard area, but failed to get a shot away, Corey Bucalossi’s effort then being blocked before Kieran Cummings curled wide in the next attack.

Tyreace Palmer quickly got into the action following his introduction from the bench but could only curl into Corcoran’s grasp, and Etete did likewise with his header from fellow substitute Syme Mulvany’s corner.

Etete pulled one back on 81 minutes when he controlled well from another corner and finished high into the net with a powerful finish on his left foot.

Lilywhites substitute Lincoln McFayden then did brilliantly to block Etete’s volley but it was the visitors that finished the better.

Josh Pollard was unfortunate not to score when he headed Jolly’s cross just over, but he did claim a marvellous assist in the following 87th minute attack.

His chipped pass across the box sat up perfectly for Walker to fire into the far-left corner and round off the morning’s work.

Nick Harrison was pleased with the professionalism shown by his players to win when only a point was required to take them through in the competition.

“We needed a point to go top of the group and progress but we challenged the players to win the game with a good performance, as we always would do, and today they got that with an excellent performance,” he told PNE.Com.

“We set off at 6.30am [for an 11am kick-off], it’s a three hour plus journey on the coach. The players had to prepare themselves which was tough for them mentally but from the first minute, we played on the front foot and got at them with and without the ball.

“Each and every player worked their socks off and it just shows they’re capable of that even though we’ve had to contend with the long journey, they can still do that and if they prepare themselves mentally, it makes things much easier on the pitch.

Harrison felt it was a controlling performance, moreover against a decent Notts County outfit, mirroring the Lilywhites’ performances in their two previous wins in the competition this season.

“I thought we really dominated, Notts County are a good team and they have one or two really good players who could’ve threatened us. [Kion Etete] caused us a few problems but the back four dealt with that really well.

“We played on the front foot and we tried to play forward when we could, short and long, and we created a number of chances from that.

“Port Vale was a bit scrappy but we saw that through but here and against Huddersfield, I think every single player has played their part in the performance and has been professional about what they’ve done.

“Above all, I’m delighted with how the players have played. We’ve done that all season really but today we’ve hit the back of the net more times perhaps than we have in previous games.”

North End finish top of Youth Alliance Cup group two with maximum points from their three fixtures and they now go into the northern quarter-finals of the competition. Follow @pnefcacademy on Twitter to discover the Lilywhites’ opponents in the next round.