Jack Baxter and Tyrhys Dolan were on target as the youth team left it late to beat Walsall in a 3-1 turnaround victory.

The game looked destined to finish goalless with few clear openings forged by either side before Owen Nolan put Walsall ahead with fewer than 20 minutes remaining.

However, Baxter and Dolan struck within a minute of each other to turn the match on its head, the latter doubling his tally in stoppage time to make it six wins in a row.

Great team response today to come away with a win 👏🏻 #character #resilience https://t.co/Gpj7B6B2TP

The visitors started the brighter with a few half chances, Jerome Jolly looping a header wide from Lewis Simmons’ delivery while Tyrhys Dolan fired a bouncing ball over.

Jolly was first to hit the target for either side, having inside from the right flank, his deflected effort a comfortable hold for Josh Griffiths.

Jolly then blazed over from closer range before Dolan prodded Darren Brannigan’s knockdown goalwards, a vital Walsall block denying him

Walsall’s nearest sight of goal came just after the half hour when McSkeane set his sights on the top right corner from 20 yards, Cottam tipping over superbly to keep the scores level.

The Lilywhites’ pressure increased as the break neared but Jolly and Josh Pollard’s efforts were wayward, Louis Potts going closer when his connection with Jack Armer’s cross was blocked just in front of the line, the PNE man then lashing the rebound wide. 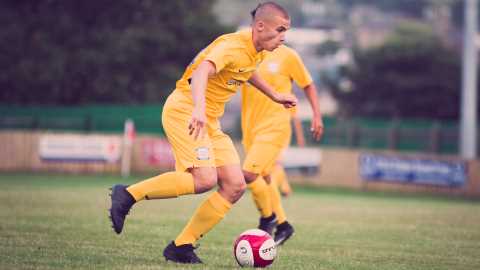 Potts made a lively start to the second half however, his early header on target but not troubling Griffiths, but it was ten minutes later when he looked more menacing as his mazy run to the right byline culminated with a pinpoint ball to Brannigan at the back post.

The PNE forward sent his header back across goal but couldn’t find a teammate, with Brannigan having another headed opportunity moments later, nodding Simmons’ cross towards the bottom corner with Griffiths forced to turn it around the post.

Perry Moss provided a warning sign for North End just after the hour when he converted Kian Flanagan’s cross but was thwarted by the offside flag.

But in the 72nd minute, there was no premature joy for the hosts as Nolan picked up a loose ball, charged into the box and sent a powerful left-footed finish into the left corner.

The Lilywhites upped a gear though and seven minutes later, with Walsall having survived a goalmouth scramble moments before, they drew level.

Jolly’s right wing free-kick was pinpoint to find Potts at the back post, the forward laying it off for Baxter, the skipper striking it sweetly as his first-time curler found the far bottom comer.

And in the following minute, the Lilywhites were in front when Jolly’s cutback from the right allowed Dolan to shoot first time from ten yards as his effort nestled inside the bottom right corner.

Walsall looked ready to throw everything at PNE, but the visitors held out well with Leak’s late header over the best opportunity for an equaliser.

Jolly curled a free-kick just over heading into time added on, in which North End scored their third for some daylight.

Baxter laid it off for Dolan just inside the area and his powerful drive was too strong for Griffiths to hold, sealing a 3-1 win for the Lilywhites.

Professional Development Phase coach Andy Fensome felt the young Lilywhites were not at their best against the Saddlers, but praised their reaction after going behind to win.

“I don’t think we played very well today and it was a bit lacklustre at times,” he told PNE.Com.

“We could feel their pressure building and when they got the goal, which is partly down to our mistake, we then decided to turn up and by that, I mean turn up the pressure and the intensity and we got two goals back fairly quickly and that’s what we were looking for in that first half.

“It’s great to come back obviously with the boys being a goal down and to then make it 2-1, but we’re looking for that intensity throughout the game or for most of it. The third goal probably flattered us with the scoreline.

“When you go behind, have to do something to win the game and in fairness to the players, they turned the intensity up eventually and that got them the result they wanted.

“Winning is important and nothing can take away from that, but we do look for performances from the players because we want them to push on and hopefully push our first team squad. Ultimately, it’s another win for the boys and they just have to keep going game by game.”

Fensome was pleased to see the team’s impressive form in attack continue – the team having scored 25 goals in the first seven matches of the season.

“It was good for Jack [Baxter] to get in the box and score from open play and it was a great strike which gave the ‘keeper no chance.

“Tyrhys [Dolan] has to start scoring more goals, that’s the position he’s in and that’s what he’s looking to work on in training, to finish with one touch rather than take the extra touch like he did in the first half and then the chance goes.

“It is good for those players to get on the scoresheet and we are scoring goals which is always difficult to do and nine times out of ten, we keep them out at the other end as well.”