Goals from Jacob Holland-Wilkinson and Tyrhys Dolan meant that PNE U18 came out comfortable 2-0 winners in their local derby game against Blackpool in the North West Youth Alliance league.

PNE controlled the game well, their attacking play limiting the number of chances the visitors had, and defending strongly when Blackpool did attack the North End defence.

It was a top of the table clash at UCLan Sports Arena, with PNE sitting at the top of the league while the visitors were in second.

Academy manager Nick Harrison made two changes to the team that started in the 2-0 victory against Bristol City in the FA Youth Cup at Deepdale, with Harry Huddart and Aaron Bennett coming into the starting line-up in place of Tyler Williams and Joe Rodwell-Grant.

PNE dominated the early exchanges and it wasn’t long before they were rewarded for their efforts. Continuing his fine form in front of goal, Jacob Holland-Wilkinson got the first goal of the game after Joe Nolan supplied a great pass through the Blackpool defence, and he finished brilliantly under the legs of goalkeeper Charlie Monks.

Minutes later, it seemed that PNE would score their second of the game, a ball crossed high into the box found itself at the feet of Tryhs Dolan who looked destined to score, only for the visitors to scramble the ball to safety.

Blackpool grew into the game the longer the first half went on, but the young Lilywhites’ defence stayed strong and the score remained 1-0 at the break.

Early in the second half, PNE goalkeeper Jimmy Corcoran made a good save down to his left as Blackpool midfielder Ryley Smith broke with pace and shot from outside the area. 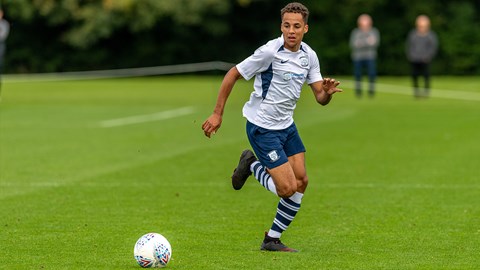 North End grew into the second half. Lewis Coulton raced down the left wing and found Bennett who was free just outside the box, the attacker shot but the ball went over the bar.

Rodwell-Grant and Brian McManus shared some quick interplay inside the Blackpool box, but their defence managed to clear the ball away for corner before the ball could test the goalkeeper.

Another chance fell to PNE, with Ben Dooley free on the edge of the area but his shot was well saved by Monks.

Rodwell-Grant outpaced the defenders and found himself against the keeper, but his shot was well saved.

In the 80th minute, North End’s strong attacking play paid off again when Dolan scored a fantastic goal from the outside of the box, turning the defenders and curving his shot straight into the top right-hand corner of the goal.

The win extended PNE’s unbeaten run to ten games in all competitions, and ensured they had the bragging rights over local rivals Blackpool.

Great 2-0 win against Blackpool yesterday boys where excellent and happy to top it off with a clean sheet 💫 10 games unbeaten 😉 @pnefcacademy pic.twitter.com/ebI3myqcN4

Academy manager Nick Harrison spoke to the club website after the win and he was impressed with his team’s performance once again, highlighting the squad’s ever-growing confidence after a fantastic run of results.

“I think they’re full of confidence and that comes off the back of the FA Youth Cup win as well,” he said. “What’s important to us is how we play and, in those games especially, I think we’ve played really well with some really good individual performances. The team played really well together.”

Harrison also praised his side for registering a third consecutive clean sheet.

“That’s not the first, we’ve had a few of them, something that we encourage and challenge all of the team to do.

“I think if we defend from the front, we normally do that really well, so it’s another one and we scored two good goals, we maybe could have even scored a couple more, so I’m really delighted with the performance and the result.”

Jacob Holland-Wilkinson’s opener extended his own impressive goalscoring tally, with Harrison having been pleased by the striker’s influence, but also highlighting that it is always a team effort.

“He’s got a number of goals this year, obviously it’s about the team and how the team play,” he added. “Certainly in the first 15, 20 minutes of today, I think we passed it really well and looked really threatening and really should have scored a couple more.

“But there’s always got to be someone there to put the ball in the back of the net and Jacob’s done that really well this season so far and hopefully he can continue to do so just as well.”

Harrison also spoke about how it was pleasing for his side to beat their local rivals Blackpool.

“Obviously it’s a massive history between the two clubs and in any game we want to get a result and play well.

“The fact it’s Blackpool does add something special and different and hopefully the players should feel that because there were quite a few people watching today, whether they were fans or parents and friends and family.

“There’s always an added bonus of doing well against Blackpool, but ultimately, we want the players to do that against everybody.”