Jacob Holland-Wilkinson and Lewis Earl netted braces as the youth team emphatically sealed their passage into the Youth Alliance Cup northern semi-final with a 6-1 win over Walsall.

Tyrhys Dolan and Brian McManus also grabbed a goal apiece, with the visitors making more of a game of the second half, managing to pull one back and seeing a penalty saved by North End’s substitute goalkeeper Ollie Lombard.

Nick Harrison made just one change from the side which beat Blackpool, as Tyler Williams replaced Harry Huddart in the starting line-up, having been in the first team squad against Norwich City last weekend.

It was the centre back Earl who opened the scoring in a blistering start to the game from the home side.

Lewis Coulton swung in a free-kick from the right-hand side and Earl’s glancing header to meet his delivery was just about adjudged to have crossed the line.

What a win yesterday from the lads, onto another big game on Wednesday full of confidence 🦋💫 https://t.co/lQH06Qv8KV

Aaron Bennett played the key pass to catch Walsall on the counter for the second goal, with his ball over the top catching out the visiting goalkeeper who failed to clear when coming off his line and leaving Holland-Wilkinson with a simple task to finish.

Bennett provided the assist for the third as well, with a slaloming run down the right flank and into the area, where he crossed low for Dolan at the back post to take one touch before converting the ball home.

Coulton returned to his feet, having been sent to the ground in the box seconds before, to receive another neat pass from Bennett and lay it across the face for Holland-Wilkinson, who didn’t get the cleanest connection on the ball, but put it over the line nonetheless. 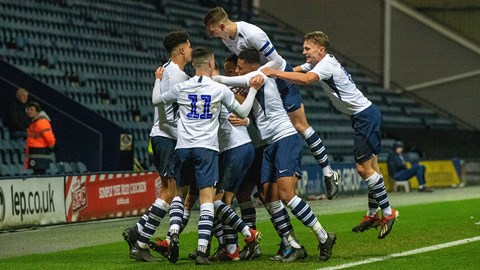 The fifth was arguably the pick of the first half efforts, as Bennett’s corner in from the right was headed away as far as Earl, who showed marvellous technique to hit a thunderous volley into the roof of the net from ten yards.

With the FA Youth Cup fourth round tie away to Oxford United approaching on Wednesday night, the second half was understandably less of an all-action affair.

It saw the visitors deny the young Lilywhites a clean sheet by pulling a goal back, and they have might inflicted further damage when Earl conceded a penalty, but first year ‘keeper Lombard – who replaced Jimmy Corcoran for the final 20 minutes – saved from 12 yards.

The hosts did add to their tally in the closing 45 minutes, though, and it was a goal to remember for McManus, receiving the ball from Joe Nolan 30 yards out and hitting the sweetest of strikes into the top left corner.

The victory ensures North End a place in the last four of the northern section of the Youth Alliance Cup, with Fleetwood Town, Rotherham United and Shrewsbury Town having all progressed to the northern semi-final stage with victories this weekend, too.

The winner of each semi-final will contest a northern final, the winner of which will face the successful side from the southern side of the draw to decide the destiny of the trophy.

Attentions for the youth team now turn to another cup competition with the aforementioned trip to Oxford United in the FA Youth Cup on Wednesday night, with a 7pm kick-off. Tickets will cost just £5 for adults or £2 for those aged over 65 or under 16.