Joe Rodwell-Grant scored the only goal of the game as the youth team beat Notts County 1-0, ensuring they finished their Youth Alliance Cup group with a maximum nine points. 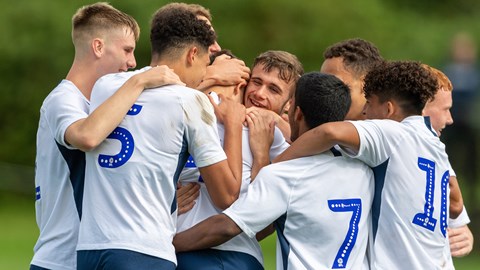 The first year scholar struck within three minutes of kick-off and that proved enough for North End’s youngsters to make it three wins out of three in their group.

Qualification to the regional quarter-finals of the competition had already been sealed prior to this game, but Academy manager Nick Harrison named a strong starting line-up nonetheless.

The decisive goal came after just three minutes, thanks to the sharpness and alterness of Rodwell-Grant, who intercepted a pass from the County goalkeeper inside the opposition area and the outcome was never in doubt – the 17-year-old finishing emphatically to score.

The Lilywhites were able to see out their win from there and all five travelling substitutes – even goalkeeper Connor Eastham – got some game time on the pitch.

Eastham was one of four schoolboys on the bench, with Aaron Bennett, Lucas Kirnon and Lewis Leigh all also coming off the bench for PNE, along with first year scholar Dooley.

It is the third season in a row in which North End's youngsters have won away at Notts County in this competition.

The youth team recently learned their fate in the FA Youth Cup with a home tie against Bristol City at Deepdale having been drawn, and we will also have news of the young Lilywhites’ next opponents in this competition, the Youth Alliance Cup, on @pnefcacademy on Twitter as soon as we have it.

In the meantime, North End’s youngsters can next look forward to welcoming Shrewsbury Town to UCLan Sports Arena next weekend, as they return to North West Youth Alliance league action in an 11am kick-off.