The clash was one of high intensity and the young Lilywhites kept the pressure on throughout, in a fantastic, well-earned victory.

North End went in to half-time already 5-1 up, with goals from Lincoln McFayden, Brian McManus, Louis Potts and a brace from Ethan Walker putting the game to bed early on. In the second half, substitutes Aaron Bennett and Jacob Holland-Wilkinson added to the scoreline, with the latter completing his hattrick.

Academy manager Harrison made four changes from the one that came from behind to beat Tranmere Rovers last time out, with Lewis Earl, Ethan Walker, McManus and Potts back in the starting eleven.

It was a quick start for PNE with Ethan Walker winning a free-kick just outside the box, but he saw his effort fly just high of the goal.

The breakthrough came with just ten minutes on the clock. Walker was involved again when delivering a brilliant cross from a free-kick on the edge of the box, and Lincoln McFayden produced a strong header past the Vale goalkeeper.

Two minutes later North End scored again, Joe Rodwell-Grant provided the ball in from the same position as the first goal, and with Walker free in the box, he calmly slotted the ball into the net for his first of the game.

The third goal came from good link up play between the PNE attackers, with Rodwell-Grant again finding space on the right-hand side and delivering the ball into the danger area, it fell into the path of Potts who then found McManus and he produced the finish to increase the lead.

Goalkeeper Jimmy Corcoran was then called into action at the other end for the first time in the game, producing a fine double save from Port Vale’s Abdi Osman and Hayden Campbell.

The visitors' only goal did then come, however, with Osman crossing from the left and Ammar Dyer finishing past Corcoran.

The game was then controlled brilliantly by the attacking play of PNE, and on the 37th minute Walker scored the fourth goal, hitting a fantastic long shot straight into the Vale goal for his second of the match.

The last action of the first half saw Rodwell-Grant again applying the pressure from the right, he struck a ball into the box with real pace and Louis Potts made no mistake with the finish.

Harrison made two changes at the halfway stage, with Aaron Bennett and Tyler Williams replacing Walker and Earl.

Jacob Holland-Wilkinson then entered the field on the hour mark, replacing Potts up top.

After a patient start to the second half, the sixth North End goal came from substitute Bennet on 70 minutes when he found space in the box and calmly shot past goalkeeper Harvey Adams.

The home side continued the constant pressure on the Vale defence, with the substitutes again making an impact, this time combining to score the seventh goal.

Williams produced a fantastic long ball forward, and Holland-Wilkinson controlled sharply before striking the ball into the bottom left-hand corner of the goal.

North End then saw a change in between the sticks, with Connor Eastham replacing Corcoran in goal. Both 'keepers had a relatively calm morning with most of the action in the game coming from the opposite end of the pitch.

Holland-Wilkinson then grabbed another goal for the Lilywhites when he got behind the Port Vale defence, broke into the box with pace and provided a calm finish.

Two minutes later, the forward then completed his hattrick, and the scoring for North End, with Lincoln McFayden supplying the ball into the box and Holland-Wilkinson finishing fiercely into the goal.

The emphatic win extended PNE’s unbeaten run to seven matches, with six wins and one draw, and manager Harrison was pleased with his team's relentless style.

"It’s brilliant to win a game 9-1," he told the club website. "Massive credit to the players, I thought they turned it on, the intensity was good and the fact that they created multiple chances and took them is an ideal situation." 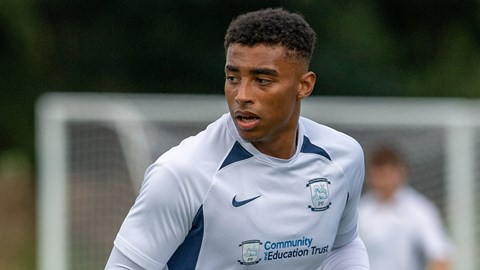 Despite not being on the scoresheet himself, Rodwell-Grant proved an important figure in the attacking set-up and although pleased with the youngster's display, Harrison stressed he was not one for singling out individuals and instead spoke of his satisfaction to see so many good performances combine for a fine team display.

"I’m not one for singling out players but I thought he [Rodwell-Grant] played his part in the game. I think all the players should take credit for the performance and the result today; we need players like Joe Rodwell-Grant to perform in that final third – which he did today – but I thought there were a number of players who did that.

"That’s what’s really pleasing, it wasn’t just one or two players doing well today, it was the collective."

The ruthless nature of the display was exemplified by Jacob Holland-Wilkinson coming off the bench to score a hattrick inside the closing 20 minutes and when asked about his impact, Harrison admitted to being pleased with how the young forward stamped his footprint on the game.

"We made a change just to freshen the game up a little bit. Jacob provided us with that bit of pace in behind and I thought that’s how he got his goals really. I felt we exploited the space in behind really well, his runs were really good and his finishes were excellent. From that perspective, it worked really well bringing him on."

The youth team's next game is the clash with Bristol City in the FA Youth Cup at Deepdale on Monday 16th December and Harrison’s side will no doubt go into that full of confidence after another victory.