Goals from Noah Mawene, Jacob Holland-Wilkinson and Joe Rodwell-Grant ensured the lilywhites avenged their midweek defeat to the same opposition with a more clinical performance today.

Before kick-off, a minute's silence was observed by all in attendance in respect of the passing of His Royal Highness The Prince Philip, Duke of Edinburgh.

The sides were facing each other for the second time in the space of four days, with two changes to the North End XI that narrowly lost out in midweek; Josh Seary and Noah Mawene returning to the starting fold, while Joe Rodwell-Grant was back from injury and on the bench for the first time in a month.

It was North End who started the brighter of the two teams when a lapse in concentration led to a mix-up in the defence for Rochdale – Noah Mawene had the easy task of heading home into an empty net to put the hosts 1-0 up.

The visitors responded well to going behind and almost drew the game level five minutes after the restart – Lombard producing his first save of the match with a blocked leg.

Moments later and North End were back in control, first as Mawene made a mazy run, dribbling past two Dale defenders before dragging a shot just wide of the post. Ben Dooley had a similar situation seconds later, but unfortunately, he couldn’t convert.

As the first half entered its closing stages, Rochdale began to threaten the PNE goal and almost levelled the scores just before the break, only to be denied by a sliding last-ditch challenge by Harry Nevin – The Irishman continuing his impressive comeback from injury. 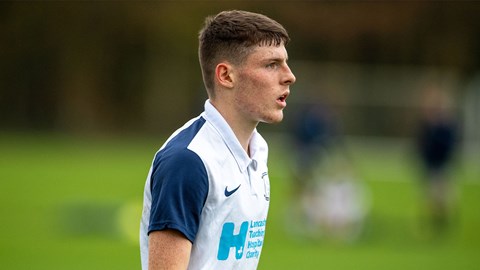 The start of the second half saw the first change of the game when left back Lewis Coulton was replaced by Wales youth international Aaron Bennett on 50 minutes, and the substitute almost made an instant impact when he collected the ball in a dangerous area, but his strike was straight at The Dale No.1.

PNE did secure a two-goal cushion on 56 minutes when Holland-Wilkinson tapped the ball into an empty net after impressive link-up play by Bennett, who squared it across the box for his team-mate, leaving the ‘keeper with no chance.

It looked like North End were about to secure all three points just 30 seconds later when the in-form Holland-Wilkinson went through on goal - this time, the ‘keeper won the battle between the two.

After an eventful 10 minutes since coming on as a substitute, Bennett was forced off due to injury and replaced by Mikey O’Neill.

Rochdale managed to pull a goal back on 65 minutes after a teasing cross was met by the Dale forward who powered a header into the top corner, giving the visitors some hope of a late comeback, despite PNE's dominance.

Moments later, Kyi Nicholson found space on the right wing before chopping inside and attempting a lob that almost caught the goalkeeper out, but fortunately for the Rochdale shot stopper it sailed just over the bar.

A final Lilywhites change saw Ben Dooley replaced by Joe-Rodwell Grant on 76 minutes, and it took just ten minutes for the substitute to impact the game, and quite a big one it was. The forward made no mistake when he went through one-on-one with the goalkeeper, calmly slotting the ball into the bottom corner.

An impressive display by the young Lilywhites ensured they picked up all three points this time around against Rochdale, avenging for Tuesday's narrow defeat.

Speaking to PNE.Com after the game, Nick Harrison praised his players after a ‘much better performance’ against Rochdale, following on from the midweek defeat to the same side.

Nick said: “It was a much better performance today, we had a lot of players come back into the team that were absent from Tuesday’s game, which helped us, and the surface was different, I think it suited us more.

“On Tuesday, we conceded four poor goals, today we were much better defensively. We also played some really good football in parts. Of course, I’m pleased with the performance of the team, along with the result.”

Despite facing the same team twice in a week, Harrison said his team's approach to the game never changed.

Nick said: “It was different for us because we normally don’t play the same team so close together but the approach to the game was the same, we challenged the players in training as we always do.

“We talked about where we went wrong in the previous game and made sure we were better today and you could see that, we encouraged the players to get on the ball and create opportunities which enabled us to go on and win the game.”