The youth side were defeated on the road at Fleetwood Town in the North West Youth Alliance league on Saturday.

North End took the lead through Jacob Holland-Wilkinson, who scored after Mikey O’Neil had picked him out in the box.

The home side turned the game around though, going ahead before half-time and extending their advantage after the break to win 5-1.

It was a much-changed side from the win against Morecambe, with Kyi Nicholson, Lewis Leigh, Joe Blanchard, Ben Dooley and Noah Mawene returning to the team.

A bright start saw North End win a free-kick in Fleetwood’s half within the first minute. Leigh opted to try his luck from the set-piece, but the goalkeeper claimed his effort.

The hosts quickly had the ball up the other end and their first attempt of the game was fired over the bar from just inside the 18-yard box.

The first major opportunity fell PNE’s way when a cross from the left was met by Joe Rodwell-Grant. His header found Mawene, who was brought down strongly, prompting penalty claims from the PNE frontline. Play was waved on though.

The promising opening continued with Leigh swinging in a corner and hitting the far post. The ball bounced back out and was cleared by the hosts.

The young Lilywhites were rewarded for their attacking endeavour when O’Neil put a teasing ball across the box, which Holland-Wilkinson controlled and then placed into the bottom right corner.

Chances for a second goal followed. Rodwell-Grant first crossed low after winning out against two defenders, but neither O’Neil nor Mawene could get a touch on the ball, and then minutes later, Mawene missed a one-v-one opportunity. 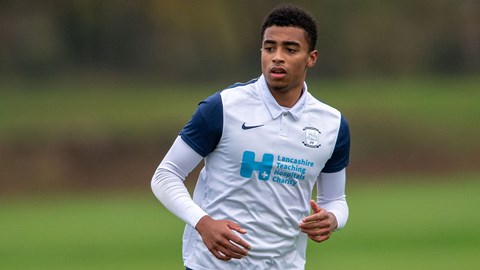 It was Fleetwood who scored next though. Cian Hayes beat the PNE defence to a cross and he turned in the box before firing into the net.

Left back Billy Batch then gave his side the lead, finishing accurately into the side netting with a left-footed strike after he’d been played through.

PNE could’ve been level at half-time, but Holland-Wilkinson’s shot from a corner was blocked on the line.

Josh Seary replaced Nicholson at the break in the first substitution from either team.

Shortly after the restart, Fleetwood capitalised on a mistake at the back and striker Enoch Takpe netted a third.

North End searched for a way back into the game and Seary placed a cross into the corridor of uncertainty, but no one in a blue shirt could get on the end of it to tap home.

Aaron Bennett came on for O’Neil and nearly had an instant impact. The ball bounced to the winger inside the box, but he failed to get his foot over it and his shot went over the bar.

A slice of bad luck saw North End fall further behind. Lombard produced a great save with his legs to stop a shot from close range, but Fleetwood worked the ball back out to the edge of the box and from there a shot took a crucial deflection for an own goal.

A double change saw Dana Amaral and Levi Lewis enter the fray, with Ben Dooley and Jacob Slater coming off.

Leigh went close with a strike from range, but Danny Edwards rounded off the scoring at the other end when he slotted home from inside the box.

Academy manager Nick Harrison felt his side should’ve been the side ahead at the halfway point of the game but were made to pay for errors at both ends of the pitch.

“It was a really strange and frustrating game,” he said. “We started the game really well and probably should’ve gone 2-0 up.

“Then I think we made some really schoolboy mistakes which leads to their first two goals. That gave them belief and confidence when it really should’ve been ourselves going into half-time with a brighter result.

“The game could’ve ended up 5-5. Both teams created chances, we didn’t take ours and Fleetwood were clinical and punished us.

“There was a lot of mistakes all the way round the pitch that led to their goals, some really poor decisions from us and the players lost their way a little bit.”

Harrison had a strong message for the youth side after the full-time whistle.

He added: “It’s not good enough to concede five goals, nowhere near good enough, and at the same time, we can’t keep missing all these chances, some really clear chances.

“Even in the second half, we put a couple of balls across the face of goal in the six-yard box that we’ve got to get on the end of.

“Goals change games and we can’t afford at this level to miss those chances and make the mistakes we did for their goals.”

The youth side are currently scheduled to have a two-week break from competitive action, next travelling to Accrington Stanley on 6th March, where they will be looking to bounce back.

“Anytime that you’re on the wrong end of a result you’ve got to go back to basics and keep working hard and believing,” Harrison continued.

“I thought there were some real positives from the game, we did create and we did dominate in parts, but we want the right results and a good performance throughout the game so that’s what we’ll keep striving to achieve.”