Preston North End U18s made it back-to-back wins on Saturday after a 2-1 victory against Morecambe in the North West Youth Alliance league.

Second half strikes from Joe Rodwell-Grant and Jacob Holland-Wilkinson were enough to secure all three points as Nick Harrison’s men continued their fine winning form.

A youthful starting XI, which included four U16s, was made-up of five changes from last week's win against Accrington Stanley, as schoolboys Kian Taylor and Kitt Nelson and second year scholars Teddy Mfuni, Dana Amaral and Mikey O'Neil came into the side.

Bryan Ly of Morecambe had the first chance of the game on seven minutes as he unleashed a thunderous strike that cannoned back off the inside of the crossbar and back into play, before the loose ball was cleared by Harry Huddart.

The Shrimps came close to scoring again moments later, only to be denied by the outstretched foot of Oliver Lombard in the North End goal. The visitors threatened again ten minutes later, striking the bar for the second time in the match.

As the half went on, PNE began to grow into the game and came close to scoring themselves on 25 minutes, Joshua Seary drilling an effort hard and low that was parried by the opposition 'keeper, unfortunately O’Neil couldn’t reach the rebound.

After a close encounter, similar to the first half of the previous meeting between the two sides back in September, the teams entered the half-time break goalless.

The Lilywhites started the second half on the front foot and immediately looked more comfortable playing with the wind on their side, after a tough first 45 playing against it. 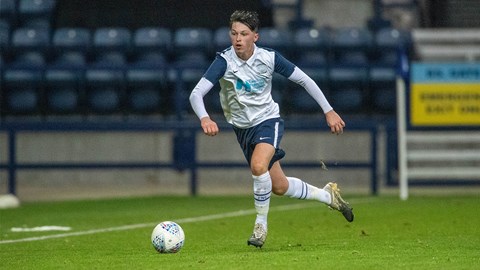 Josh Seary: "We Had To Dig Deep"

Within the first ten minutes of the restart, PNE had two half chances to take the lead, first through Holland-Wilkinson who was denied via a last-ditch block, then through Amaral, who couldn’t generate enough power in his header to beat the 'keeper.

The game burst into life on the hour mark as PNE were awarded a penalty after Holland-Wilkinson was brought down by a Shrimps defender. Joe Rodwell-Grant made no mistake with the spot kick, sending opposition 'keeper Mendes the wrong way.

Two minutes later and the ball was on the penalty spot again, but this time it was the visitors who had the chance to score from 12 yards, and Ly dispatched expertly to make it 1-1.

The Shrimps looked to undo all North End's good work in a matter of minutes and almost took the lead, only to be denied by Lombard again, who was on inspired form to keep the scores level.

On 75 minutes, PNE went in search of a winner by introducing Levi Lewis for Nelson, as the Lilywhites pushed to turn one point into three.

Lombard, who had a busy game between the sticks, was called into action again, this time producing a fine double save to help set up a dramatic final ten minutes as both sides showed no signs of settling for a point.

As the clock struck 88 minutes, Rodwell-Grant looked like he had won it for the home side after he headed home from close range, only to be denied by the offside flag in what looked a very tight call, much to PNE's frustration.

But deep into added time, there was to be a winner and it was Holland-Wilkinson who supplied it, squeezing the ball home after a scrappy goal line scramble; no need for goal line technology for this one!

A strong performance from a young North End side ensured they came away with a much deserved three points.

Speaking after the game, Academy manager Nick Harrison said he was ‘pleased with his really young team’.

“I am really pleased with the performance,” said Nick.

“We had four U16 players starting the game, a game that was played in really hard conditions. It was very physical at times and we had to battle for every ball and our young players stood up to that.”

North End were much changed this week compared to last weeks fixture after Nick announced the squad had been suffering from injuries and COVID related absences.

“We have suffered a few injuries this week to some of the older lads, some lads are also self-isolating, so we have had to bring in a few of the younger players today, but they are more than good enough, as we have seen today; they took their opportunity.”

Building on last weeks win, Nick has high praise for his side’s performances, adding the only difference from their slight dip in from is that they have been more clinical in recent weeks.

“We have been taking our chances and stopping the silly goals we were conceding. In terms of the results, the performances have still been good.

“In the last two games the players have been more clinical and improved in them areas, we are always looking to progress, improve and challenge the players, and we will continue to do that.”