The youth side were beaten 4-1 by Blackpool at home in the North West Youth Alliance league on Saturday.

The young Lilywhites took the lead early on in the match when Jacob Holland-Wilkinson got on the end of a through ball and slotted in.

But goals from Brad Holmes, Michael Fitzgerald and a Rob Apter brace turned the game around for the visitors.

There was one enforced change to the team that faced Oldham last weekend, with Jacob Slater coming in for the injured Lewis Coulton at left back.

The opening goal of the game came after just six minutes when PNE’s number one Oliver Lombard smashed a long ball forward, which was not dealt with by the Tangerines, and Holland-Wilkinson nipped in round the back to capitalise. 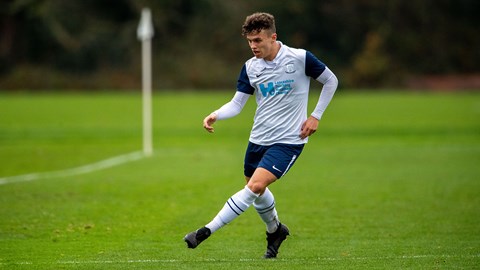 The visitors equalised ten minutes later when a throw-in from the left fell to Apter and he played in Holmes. From there, the striker placed a shot into the bottom right corner.

As PNE looked to respond to the setback, captain Ben Dooley burst down the right well, but his cross found only the gloves of Charlie Monks in the Blackpool net.

Soon after, Holmes’ movement allowed him to find space down the right flank to cross to Luke Mariette, who headed his effort just wide of the left post.

Both sides were finding room in the opposition’s box – Apter attempted to chip Lombard at one end but didn’t put enough on the effort, whilst Rodwell-Grant went close with a strike at the other.

Blackpool took the lead when some good work down the left wing by Prince Yelegon won his side a corner, from which Fitzgerald tapped in.

The visitors were not looking to settle, and midfielder Tayt Trusty showed nice control in the box to work an opening, but shot straight at Lombard.

PNE fought back with Slater stinging Monks’ palms with a left-footed effort and Lewis Leigh testing the ‘keeper from distance, but the home side headed into half-time behind.

A bright start to the second 45 nearly brought an equaliser. First, Dooley played in Leigh smartly down the right, and Blackpool only just managed to clear his ball in. Then a cross from the left was deflected off a defender and could’ve gone anywhere, but ended up going wide.

It wasn’t long however before the lead was extended by Apter. The midfielder cut in from the right to the middle of the park and took aim from distance, placing a well-hit shot into the right corner of the goal.

There was nearly an instant response to the third when Dooley and Leigh combined once more and the latter’s powerful strike from the right of the box hit the outside of the post.

The end-to-end nature of the contest continued and Apter was denied by Lombard, who palmed his effort over the bar, before Mawene put too much on his shot after the ball had fallen to him on the edge of the box.

Holmes was denied by a Joe Blanchard block but Blackpool did score when Apter broke clear and found the net for his second.

Further changes were made by both teams with Mikey O’Neil and Dana de Oliveira Amaral taking to the pitch for the hosts in place of Rodwell-Grant and Dooley.

Mawene dinked a ball to the back post where Huddart was on hand to head towards goal, but the attempt was saved in what was the last meaningful action of the game.

Reflecting after the full-time whistle, Academy manager Nick Harrison said: “I think overall it was a poor performance and probably our worst of the season.

“Normally if it’s not a result that we wanted we talk about how we played well but we couldn’t take our chances, but I don’t think that was the case today.

“They’ve trained well all week, but they’ve got to do it when it matters and overall at the elite level, it matters when game day comes along, so that’s really disappointing.”

Harrison believes his side were made to pay by the visitors for the mistakes they made.

“I think Blackpool were very clinical so we’ve got to give them credit, but the goals come from really bad errors, whether that be from someone giving the ball away further up the pitch when they don’t need to, or just bad errors from individuals at the back,” he told PNE.com.

“Sometimes you get away with them and today we didn’t. At this level our players shouldn’t be making those mistakes – it’s simple passes, touches or decisions to make.”

In last week’s narrow defeat, Harrison had been encouraged by the fighting spirit his team had displayed. However, he felt this was lacking this time out.

“I think the positives are that we started both halves well, we moved the ball well and we looked threatening so that’s what we need to continue with and build on, but when it didn’t go right for us and we couldn’t find the answer, we kind of gave up and that’s not the mentality we want – it’s not acceptable.

“If you can’t score you’ve got to make sure you don’t give up and give the opposition easy goals. If it’s not going quite right, then we’ve got to keep going and young players can’t afford to give up.

“We’ve got to learn that we can’t afford to make mistakes at this level because we get punished and we’ve got to be more ruthless and keep at it.”