A tough away day for Preston North End U18s ended in a narrow 3-2 defeat to Bolton Wanderers.

Goals from Mikey O’Neill and Kyi Nicholson were not enough to secure the three points for North End as the hosts edged a five-goal thriller.

Academy manager Nick Harrison made three changes to the side that beat Salford City last weekend; Josh Seary, Jacob Slater and Levi Lewis coming into the side, replacing Harry Nevin, Ben Dooley and Lewis Coulton in the line-up – the latter later appearing among the first team substitutes at Vicarage Road, alongside fellow scholar Jacob Holland-Wilkinson. 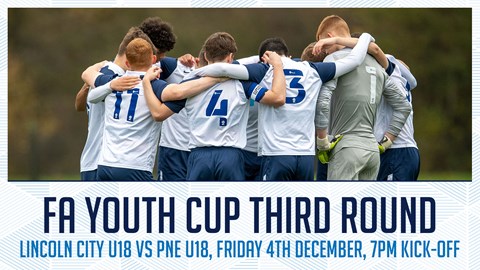 Dooley, who has captained the U18s for much of the campaign, was also unavailable after travelling with the first team for their game against Watford.

Lilywhites goalkeeper Oliver Lombard was called into action within the opening minutes of the game, producing a fine double save to keep the scoreline at 0-0.

On what was a wet and windy day at the Eddie Davies Academy, both sides battled for possession, with neither team able to grab a strong foot hold of the game in the opening 15 minutes.

Bolton began to look more threatening as the half went on, and on 18 minutes, they found themselves in front as the ball squeezed past Lombard in the Lilywhites goal.

Moments later, the Trotters came close to doubling their lead, only to see the looping header sail over the crossbar.

North End’s defence was called into action on 32 minutes, not once, but twice as Josh Seary made a crucial block before his defensive partner Nicholson ensured the ball stayed out of the net.

As PNE looked to be heading into the half-time break behind, Mikey O’Neill smashed the ball home from close range, leaving the Bolton No.1 with no chance, after a delightful pass from Nicholson to create the opportunity.

Half-time saw Harrison make his first change of the game when Oliver Lombard was replaced by Declyn Duggan between the sticks.

Harrison’s team talk during the interval seemed to have worked as PNE started the brighter of the two sides, Vaughn Green unlucky to see his effort flash just wide of the post.

But unfortunately for the visitors, it was Bolton who regained the lead on 55 minutes against the run of play, causing frustration for the PNE backline after their good start to the half.

Finlay Cross-Adair and Dana Amaral were introduced to the action just after the hour of mark, in place of Noah Mawene and Aaron Bennett.

Despite the changes, it was Bolton who got the next goal of the game, when a corner kick was headed home from close range to double the hosts’ lead.

PNE responded positively to the setback and almost found a way back into the game through Nicholson, whose effort deflected wide for a corner before being cleared.

The game had become slightly stretched in the final ten minutes, as Wanderers almost made it a four, only to be denied by the crossbar.

As the game entered the final five minutes of play, North End were given a lifeline as Kyi Nicholson coolly converted from inside the box, lifting the ball over the onrushing ‘keeper to ensure the visitors weren’t going down without a fight.

Despite late pressure from the young Lilywhites it was not enough to grab a late point at the Eddie Davies Academy.

Speaking after the game, Nick Harrison was full of praise for his younger players’ performance despite the result.

“In terms of the performance, I thought it was good, especially the younger players, as we rested a few players today and had quite a few of the senior players missing as they travelled with the first team.

“It was two good teams with both sides trying to win the game, its unfortunate we haven’t been able to come out on top on this occasion, but overall, I thought we did okay.”

Harrison insisted that despite the result, his group of players will have taken something important from the game.

“With a number of the senior players not available today or being rested, it was a good chance for some of the younger lads to come in and play against a really good opposition.

“I think the best way for players to improve is to play against good players, so I definitely think they will have learnt something from the game.

“We had some good chances today and maybe should have scored more, but the main positive to take is the minutes on the pitch for some of the younger lads who haven’t featured as much this season and their development.”

Preston North End U18s travel to Lincoln City in the third round of the FA Youth Cup in their next game, with a 7pm kick-off at the LNER Stadium on Friday 4th December.