The youth side extended their winning league start at home to four games as they beat Salford City 2-1.

Josh Seary netted his second goal in as many games after the break, and despite the visitors pulling one back, the young Lilywhites stayed resolute to secure all three points.

There were five changes to the line-up that started the last game against Shrewsbury Town.

Kyi Nicholson and Lewis Coulton came in at right back and left back respectively, while Mikey O’Neil, Noah Mawene and Green slotted in to the XI too.

It took just six minutes for the hosts to go ahead when Nicholson found Mawene on the edge of the box, who tapped the ball to Green and the forward turned onto his left foot before firing low into the bottom right corner.

The goalscorer could’ve bagged again five minutes later as he powered through the challenge of two defenders in the box, but he didn’t connect with the ball in the way he would’ve liked and his shot went wide.

Oliver Lombard’s first action between the sticks came when he had to tip a long-range effort over the bar.

Green was alert in the box at the other end to steal the ball off a defender before shifting it onto his right foot and curling an effort just wide.

He came close once more when Bennett made waves down the left flank and fired a low cross just inches in front of his outstretched right boot.

Salford had the ball in the net shortly after, but the flag was raised when the No.9 slotted home from an offside position after the ball had rebounded off the post.

Bennett had a free-kick saved and Mawene prodded wide from the resulting corner when the ball fell to him in the box as the half-time whistle was blown.

Two changes were made by PNE for the second 45 as Seary and Levi Lewis replaced O’Neil and Green.

Another Bennett free-kick went closer than the last as he struck the post soon after the restart.

The woodwork was on North End’s side the next time it was hit though, when the two substitutes combined to double the lead.

Lewis capitalised on a mistake in the Salford backline and put a ball across the box for Seary to bundle in off the upright.

The visitors looked to hit back straight away with a set piece in a promising position, but the attempt was sent over the bar.

A third change saw Finlay Cross-Adair taking the place of Mawene in the attacking line.

The youngster was immediately into the action, cutting in on his left foot and shooting into the ‘keeper’s gloves.

With 12 minutes left, Salford found their goal as the forward jinked his way into the box and fired low into the bottom left corner.

Dana Amaral came on for the closing exchanges with Lewis Leigh making way. 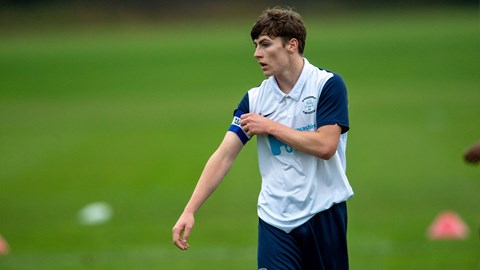 Salford pushed for an equaliser and nearly found it when a curling effort whistled just past the post.

Ben Dooley was on hand to block superbly in added time to prevent a shot heading towards goal, and that proved to be the final action of a hard-fought contest.

Nick Harrison was impressed with how his side dealt with the wet and windy conditions to make it back-to-back wins in the North West Youth Alliance league.

“The weather played its part in terms of making it difficult to play and at times, the wind got hold of the ball and made it tricky, but I thought the players kept trying to do the right thing,” he said.

“Despite the conditions, I thought there were some really good spells where we passed the ball and created some good chances, so I’m pleased with the way the lads played and obviously it’s always good to get a win and two on the bounce.”

The U18s looked set to pick up their first clean sheet since the second game of the season but lost it late on, which the Academy manager put down to a lapse in concentration.

Harrison added: “I thought it was going to be, but I think we just lost our focus and made a couple of mistakes which led to their goal.

“Then we had to deal with a bit of pressure because when you’re winning a game 2-1 with five minutes or so to go, the opposition are going to come at you.

“I thought we weathered the storm and managed the game really well at the end, but if we’d took our chances throughout the game, we could’ve made it a lot easier for ourselves.”

Harrison changed half of the outfield players from the previous starting XI and was happy with how those alterations played out.

“That’s been the story of our season – we’ve made a lot of changes game by game, whether that’s down to injuries or players being out on loan or not available, and I think that’s the nature of youth football as well,” he said.

“We want to make sure that we give players the opportunities where we can, and I thought we did that today.

“All the players coming in slotted in well and that’ll continue until the end of the season.”