The Lilywhites came from one down to complete an impressive turnaround, with goals coming from Ben Dooley, Aaron Bennett, Jacob Holland-Wilkinson, and a brace from Lewis Leigh securing all three points for the home side.

The visitors started the brighter of the two sides, forcing a smart save inside the opening 30 seconds from Oliver Lombard, who returned to the side in goal this week in place of Declyn Duggan. 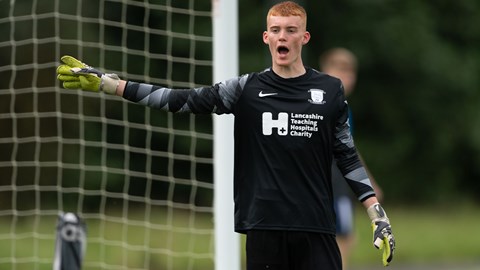 Unfortunately, Lombard was beaten five minutes later through Enoch Takpe as he gave the Fishermen the lead after a deflected shot found the bottom right-hand corner from just inside the box.

Fleetwood were awarded a penalty just moments after breaking the deadlock, this time Lombard was equal to the strike; making a fine save that would turn out to be a crucial turning point in the game.

North End had their first half chance of the game on 20 minutes through Aaron Bennett as he won PNE’s first corner of the half that lead to a scramble in the box before being cleared by the visitors.

The Lilywhites did level the game on 27 minutes through Lewis Leigh. The winger combined with forward Noah Mawene, who set him up perfectly for a left-footed strike that left the ‘keeper with no chance.

Five minutes later, Leigh was at the heart of things again, this time flicking on Joe Blanchard’s long-range pass to Josh Seary, who delivered a teasing cross into the box that was tucked home by captain Ben Dooley.

Seary and Leigh continued to look threatening for the home side in the closing minutes of the first half, constantly causing problems for Fleetwood’s full back down the right-hand side with their overlapping runs and dribbling abilities.

PNE started the better of the two sides in the second half and were awarded a penalty on 49 minutes. The resulting spot kick was expertly dispatched hard and low by Aaron Bennett, despite the ‘keeper going the right way.

North End enjoyed more of the ball in the opening stages of the second 45, with Ben Dooley dictating midfield, constantly spraying passes across the slick surface at a wet and windy Uclan Arena.

Dooley went close to adding a fourth for the dominant Lilywhites, but his effort was saved well by Fleetwood No.1 Connor Eastham on 55 minutes.

The goalkeepers were on top again moments later, this time it was Lombard who produced one of the saves of the season as he denied what looked like a certain goal from a close-range header to keep the score at 3-1.

On 75 minutes, Vaughn Green was almost rewarded for all his hard work up top, only to see his effort just fire wide of the post, and with 15 minutes left to play PNE looked like they were in the mood for more.

The fifth goal of the game and North End’s fourth did eventually come on 83 minutes, this time Green hitting the post before the ball rebounded to the feet of Lewis Leigh who smashed home to give PNE a three-goal cushion.

The five-star display was signed sealed and delivered by second half substitute Jacob Holland-Wilkinson, as the super sub converted coolly from inside the six-yard box after Eastham parried the ball into his path.

Nick Harrison said he was ‘delighted’ with how his team responded to last week’s defeat, but also with how they responded to going a goal down early on to Fleetwood.

“Although we had a 15-minute spell at the start where we struggled to get into the game, after that I thought we were excellent.

“We passed the ball well, created chances and every player worked hard for each other so I am delighted with how we performed today and obviously delighted scoring five goals and winning the game.”

With four different players getting on the score sheet today, Nick said he is “always challenging his players to improve.”

“Its what we need to do to help improve the development of the players so that they can move up to the higher age groups, what you saw today was a number of really good players who are willing to step up and just like today, they have done that all season.”

Speaking of Oliver Lombard’s superb goalkeeping performance, Nick added: “He done great coming back into the side today, he made a fantastic save in the first minutes of the game followed by a brilliant penalty save.

“The penalty save changed the game for us, after that we seemed to settle down and found some good spaces and became more positive with our movement and going forward, Oliver certainly played his part in that.”