The Lilywhites were two to the good before the break thanks to a pair of Joe-Rodwell Grant penalties, a lead that was doubled within five minutes of the restart with Noah Mawene volleying home and Rodwell-Grant completing his hat-trick.

Midfielder Ben Dooley added a fifth with ten minutes to go before a late Blackpool own goal make it six and wrapped up a massive derby day win.

It was a scrappy start to the game with fouls aplenty and both sides fighting hard to gain a foothold.

The key foul however came in the 15th minute when skipper Rodwell-Grant was brought down in the box and the referee pointed to the spot. The striker powered the ball straight down the middle past Alec McLachlan in the Blackpool net who dived to his right, opening the scoring.

The home team responded well to going behind with Luke Mariette shooting wide from range and Prince Yelegon hitting the target with his edge of the box shot after some good work to hold off Harry Huddart.

At the other end, Rodwell-Grant had a great chance just before the half hour mark when he was played through on goal, but his chipped effort curved wide of the right post.

Decyln Duggan pulled off a crucial save with a minute of the first half left to deny Mariette, who seemed certain to score but could only find the PNE ‘keeper with his powerful volley.

It was into added time when North End won their second penalty of the game as Leigh was tackled late after he had broken clear down the left.

Rodwell-Grant this time went low to the left and McLachlan guessed correctly but couldn’t stop the striker from giving his side a two-nil half-time lead.

North End started the second half as they finished the first, working the ball well down the left before it fell nicely to Mawene, who’s volley flew into the bottom right corner to make it 3-0.

It was soon four after another positive move on the left flank resulted in Dooley cutting it back for Rodwell-Grant, who slotted the ball into the same corner that Mawene had just a minute before.

The hat-trick hero showed great strength to hold off a Blackpool defender when Harry Nevin played a through ball over the top, but the striker couldn’t quite bring it under his control and was then replaced by Green for the final 20. 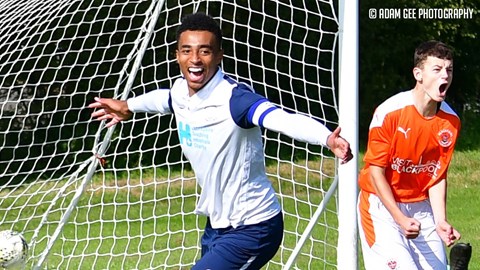 Rodwell-Grant ‘Over The Moon’ With Derby Day Hat-Trick

McLachlan made a solid stop to prevent Leigh’s left-footed effort, but he was helpless a few minutes later when Leigh’s interception found Dooley with loads of time to round the Blackpool ‘keeper and make it 5-0.

North End were made to work for their clean sheet with Blanchard on hand to clear Jak Wood’s curling left-footed shot off the line.

The centre back and his fellow defenders could then only watch as Rob Apter’s strike from inside the box struck the left post a minute later.

Two further changes were made by PNE when Kyi Nicholson and Teddy Mfuni came on for the final five minutes in place of Seary and Slater.

The sixth and final goal then came in the 88th minute when a back pass deceived McLachlan and ended up in the back of the net.

Nick Harrison was elated at the full-time whistle after seeing his young side deliver what would certainly have been a dream scenario heading into the game.

“It was an excellent performance and a great result in terms of playing our local rivals,” said Nick. “The players need to take all the credit.

“For the first 15-20 minutes they really had to do the ugly side of the game first and win their battles and put their body on the line, so I thought we did that really well.

“As much as scoring six goals might be the headline, I’m pleased with the way the players worked and competed for each other to try to get the ball back in order for us to score the goals.”

A second successive clean sheet was also a positive factor for the Academy manager.

“We’ve kept two clean sheets in the two league games we’ve played after what was a difficult pre-season coming up against some big clubs and conceding a number of goals, so in terms of that process, it’s certainly worked.

“The players have worked hard on defending and protecting the goal and I thought they did that really well again.

“It’s a really young back four and a first year goalkeeper, so it’s really pleasing that we’ve managed to do that in a game again and long may that continue in the games coming up.”

Speaking on Rodwell-Grant, Nick added: “He’s a player that’s really matured, which we often see when players come back after the summer, and when they do their performances improve and that’s certainly true with Joe.

“He’s worked hard, he’s put his body on the line, he’s worked for the team and he’s got his reward with the three goals today.

“That’s something we expected from Joe, we hoped that it might have come in his first year, it didn’t but he’s worked hard over the break and we’re delighted with the way that he’s come back for this season.”