Preston North End U19s secured a hard-fought win away at Tranmere Rovers to gain their first three points of the league season with a 2-1 victory.

In an entertaining second half, Noah Mawene and Kian Best each got their names on the scoresheet either side of a 62nd minute equaliser from the hosts.

Three changes were made to the starting eleven that won against Fleetwood Town last weekend, with Oliver Lombard, Kitt Nelson and Noah Mawene replacing James Pradic, Josh Seary and Rio Pemberton in the side. 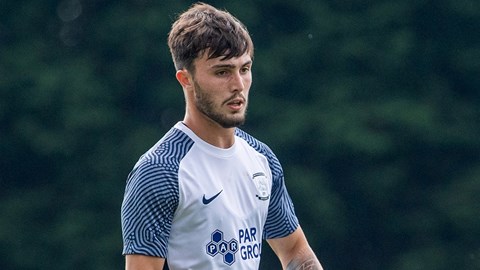 North End spent the majority of the first half on top with Jacob Slater’s goal being disallowed for offside and he was also unlucky with a near post effort minutes before.

Several of his teammates also tested the keeper with shots on goal, however the visitors were frustrated in their attempts and went in at half-time with the scoreline goalless.

The Lilywhites didn’t have long to wait for the breakthrough in the second half as on 49 minutes Mawene closed down the Tranmere goalkeeper and managed to deflect his attempted clearance upfield into the back of the net.

It was a revitalised Tranmere side that came out for the second half and after falling a goal behind, they took the game to North End as they pressed for an equaliser.

North End went closest to the next goal though when Levi Lewis had a chance to double PNE’s lead ten minutes into the second half after a short free-kick routine, but his shot from the edge of the area rattled the crossbar with the opposing keeper left stranded.

Seven minutes later, Tranmere equalised with a low long-range strike that found its way into the back of the net via an unfortunate bounce that took it over 'keeper Oliver Lombard, who seemed to have the initial shot covered.

It was a setback for the Lilywhites, whose hard work to finally take the lead had been undone in frustrating circumstances but they displayed the character they needed to go on and win the game.

The Lilywhites survived one or two more scares before Finlay Cross-Adair and Mikey O’Neill both had opportunities to wrap up the tie in the final stages but they were unable to convert them.

That was how the game ended to see Nick Harrison’s side collect their first three points of the league season.

Speaking to PNE.Com after the game, Nick said: "I thought we dominated the first half, we passed the ball really well and just lacked a little bit of quality in the final third."

On Tranmere's goal, Harrison added: “It was a good strike from the lad, it took a little bit of a bobble and that can be gutting for any group of players, especially a young group of players.”

"I thought we showed great character towards the end of the game to firstly get the second goal which wins the game but just character to match Tranmere and to see the game out."

“First half we had a lot of the ball because they dropped off. We knew they would come at us [in the second half] so once a team is coming at you, there is more space in behind so we challenged the players to pass the ball a bit longer.

“They’ve got to understand that you can’t just play the same way all the time and we needed to stretch them a bit which I thought we gave a good go. That’s a real good learning curve for our lads which I’m really pleased with."