Preston North End manager Alex Neil spoke to iFollow PNE ahead of the New Year’s Day visit of Middlesbrough to Deepdale and set out his hopes for 2018.

The Lilywhites boss says his side are aiming to write themselves into the club’s history books and get the people of the city talking as they embark on the second half of the season in a position just outside the second tier Play-Off positions.

“I have spoken before the history of Preston North End – people talk about it regularly – and I want to try and stop that to an extent and the only way to do that is to create your own history,” he said.

“There are exciting things going on at the moment and that should be the talking point, rather than what we did 40 or 50 years ago.

“That is my aim and that is the aim for this team and certainly over the course of the second half of this season, hopefully we can go and achieve something great and if not, then I am sure it will be in the years to come.” 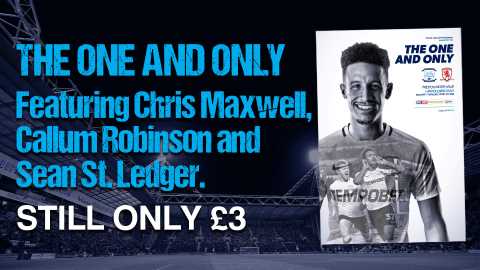 Alex’s side moved into seventh position, just one point behind the top six with their late win at the Cardiff City Stadium on Friday night, and the gaffer thinks they will take an extra boost from this.

“I think the fact we climbed up to seventh and one point outside the Play-Offs when we won on Friday night was pleasing and it will give the lads confidence,” he continued.

“We are nine games unbeaten now and whilst we don’t dwell on the games in the past, because there is nothing we can do about them now, what we do is take good confidence and great heart from the fact we are performing well.

“It is five wins and four draws from the last nine games, which is really pleasing, however, we have got a really tough match coming up against Middlesbrough – who are one of the big spenders in the league – and they will be expecting to win the game.”

The preparations for the game have been slightly altered by the fact the majority of time is spent recovering from the previous game, but also by the fact that Tony Pulis will take charge of just his second Middlesbrough game at Deepdale.

“There is not a lot of training that goes on at this time of year, it is really for the lads who are getting topped up, who haven’t started or got a lot of minutes, to make sure they are ready if they need to go and play the next game.

“For the other lads, it is more about recovery. We have the Cryotherapy unit in for the first time this season, which is good, as this will give the boys that added bit of respite and aid their recovery from the game.

“A lot of our work had been done before Tony came in, however, we will have someone at their game against Aston Villa to watch them and see them at close quarters and we will take the bits of that which are going to be useful and add it in to our presentation to the players.

“We focus heavily on the tactical side of things, but that is just one component in the game. The simple fact is, tactics and shape and giving the players information and analysis doesn’t really matter if the players don’t play well – all it does is give them the answers before they are going into a quiz and they then have to try and find the right solutions when they go out there onto the pitch.

“The early games gave us the confidence to get us where we are now. The game at Middlesbrough, in particular, was quite common with a lot of games this year, where we have done more than enough to win, but it was just that final bit of cutting edge that was needed, but if we can add that to our game then we will find ourselves up the league, but all the signs are really encouraging,” he added.