Sheffield United manager Chris Wilder says his side will continue to keep on attacking as they head to Deepdale this weekend.

Speaking to the Sheffield Star earlier in the week the former Blades player says they will keep adopting a positive attitude, as they did when they went down to ten men against Bristol City in front of the TV cameras last Friday night.

The Yorkshireman’s team continued to chase the game following the loss of midfielder John Fleck through a straight red card, as he introduced both Clayton Donaldson and David Brooks before eventually losing the game in added time.

Speaking to the side’s local paper, he said: “We’re positive with our substitutions because we always want to win.

“Things aren’t going for us at the moment, but we’ll keep going, keep doing the right things, to get ourselves back on track. 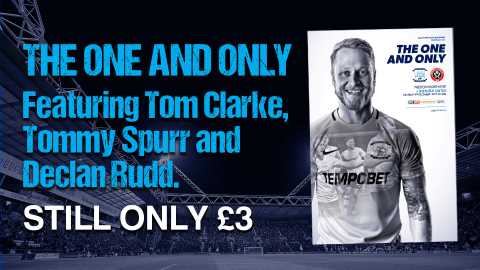 The One And Only Issue Eleven

“Sometimes fortune doesn’t favour the brave, but we’ve got nothing to be down about at this football club. Nobody should be down, I can’t be down with what these lads are giving me.

"I can’t criticise it at all. I love the way they play.”

The loss of Fleck in the game against the Robins last Friday was something heavily analysed by the media after the game, but the former Halifax Town manager said his players must play fair and not make more of tackles made on them.

“I want players to tackle because that’s part of the game,” he said. “There was a tackle in the Birmingham City versus Wolves game not so long back; that’s exactly what we want.

“We need to be careful it doesn’t go over the line and I don’t think John did. It was a committed tackle, but he took the ball and didn’t dangle his leg high. In my day, that wouldn’t even have been a booking.”

“We’ve had it done to us, all of that rolling about business, in the past and yes, it’s frustrating, but it’s not something I’m ever going to ask my lads to do. Quite the opposite in fact.

“We take a great deal of pride in the fact that we play hard but fair, which is the way it should be, the way fans want to see. And that’s something we are going to make sure continues. We won’t be trying to con anybody, it’s not how we do things here. You can’t complain about it and then start doing it yourself."