Tuesday will be the 87th time we have played a league match on Boxing Day, but only the 26th occasion we have found ourselves on the road the day after Christmas.

The first of those trips was to West Bromwich in 1888 and we came away having beaten Albion 5-0 that day.

Fortunately the fixture planners have generally been kind, with only trips to Leicester and Cardiff in 1959 and 1963 respectively required any extensive travel.

As for today’s hosts, this is our 50th league meeting with Barnsley and so of course our 25th visit to Oakwell.

We have a 50 per cent success rate, in that we have taken points from half our matches there from six wins and six draws.

Although we had a comfortable victory in our first visit to the Tykes winning 4-0 in 1901, it was to take 49 years and 12 further attempts before we next came home with all the points. We matched that 4-0 scoreline exactly 100 years later, but we have only scored more than one goal on two other occasions, losing 4-2 in 1931 and winning 3-0 under Alan Irvine in 2009.

Our hosts have been equally frugal with the goals, history suggesting today might be a tight affair.

Jimmy Baxter began and ended his career with Barnsley, either side of a spell as a member of our great 1950s side that challenged for the league title and reached the 1954 FA Cup Final.

Others to have played for both clubs include Deniol Graham, David Lucas, Jon Macken and Iain Hume.

Two former players both celebrate their 35th birthdays today. Michael Keane is perhaps best remembered for his debut appearance in 2001, wearing a shirt that had clearly been made for a much bigger man! 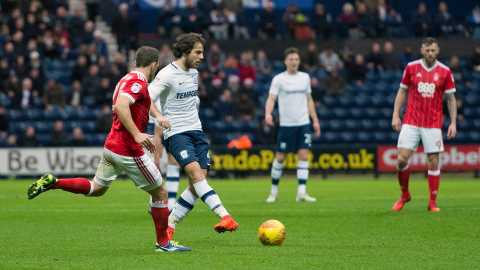 He certainly endeared himself to the fans and went on to make 65 appearances before crossing to Hull City in 2003.

Guylain Ndumbu-Nsongo is one of a select band of players with hyphenated surnames to appear for North End, the Congolese player making six appearances on loan from Sheffield Wednesday in 2004.

Two players who went on to have long careers at Deepdale made their debuts in the same game back in 1960.

Full back George Ross and winger Dave Wilson were products of our highly successful youth team who reach the FA Youth Cup Final the previous season and both were selected for the home game with Nottingham Forest.

George of course returned to the club as a matchday host until his sad death two years ago and lies eighth on our all-time appearances list.