After signing a three-year deal at Deepdale, Declan Rudd feels like he has returned home after enjoying two spells with the club previously.

Rudd spent 18 months with the Lilywhites over the course of two loan spells, helping the side to the League One Play-Offs in his full season with North End during the 2013/14 campaign. 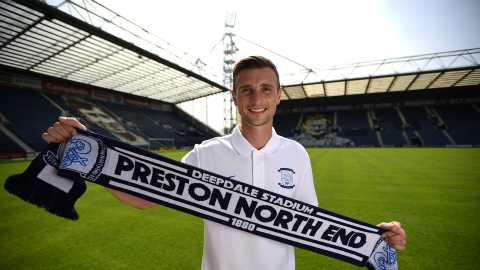 After enjoying his time in PR1 last time out, he was delighted to make his return to Preston North End, this time on a permanent basis.

Speaking to iFollow after completing the deal, the 26-year-old said: "It’s something that’s always been in my mind coming back here. When I was on loan here a few years ago it felt like home to me and everyone made me feel welcome and wanted and its always been in my mind. The last three or four years I’ve been here, there and everywhere and I’m happy to finally come back and get things underway.

Having been at Norwich City since the age of eight, Rudd feels now is the right time to make a change and feels PNE is the right place to do that.

"It’s been 18 years now, it’s all I’ve ever known. I’ve been here on loan and I’ve been to Charlton on loan but there was always ties with me and Norwich City. I think the time is right for me to cut those ties and finally go out and make my career. Not as the young boy who’s come through at Norwich but go somewhere and make myself who I am, rather than who I used to be.

"I had 18 great years at Norwich and I was a Norwich fan as a kid. I have a lot of thanks for them and what they’ve done but to come back here is brilliant for me and I’m really happy to be back.

"I said to my family - we had a sit down about leaving Norwich and where I was going - and I always said it doesn’t feel like I’m signing for a new club. It feels like I’ve been away for a couple years and I’m coming back to where I’ve been and where I’ve really enjoyed myself.

"Me and the missus have always said that the full season I had here was one of the best and most enjoyable seasons I’ve had in my career so far. Hopefully I can come back and the club can push on and get into the play offs or get promotion.

Rudd will know plenty of faces around the dressing room and within the coaching staff, something that he feels will help him to settle back in quickly.

"Obviously Kels knows me as a goalkeeper and as a person. It was my first time away from home when I came here for the first time and Kels was a great help. The gaffer, Glynn and all the staff are all really helpful. It’ll be really easy for me to make the transition from Norwich and I can’t wait for the season to get underway.

"It’s nice to have some familiar faces but also hopefully make some new friends. I’ve heard the group in the dressing room is a really good group of lads and really close knit - you could tell that by the way they played last season. I’ve kept a close eye on all the results since I haven’t been here and you can tell by how they did last year how close they are. It’ll be good to get in when we get back for pre-season and get to know everyone."

Competition for a starting place will be fierce this season, with Rudd facing competition from Chris Maxwell, but that is something the former England U21s international is looking forward to.

"It’s something that you want. Nothing is ever given in football. Competition is what brings out the best in anyone so it’s good. Coming into a new club with a different set of players there is going to be competition, so it’ll be good. As a goalkeeper, you know there’s only one of you that can play on a Saturday, every goalkeeper knows that and it’s just one of those things - I’m looking forward to it.