Sean Maguire described his Republic of Ireland debut as a dream come true after getting his first cap on Friday night.

Maguire received his first call up to the senior squad ahead of the World Cup qualifiers against Moldova and Wales this month, and it was in the 2-0 win over Moldova that the forward made his first appearance for his country.

Having grown up in Ireland and setting the League of Ireland alight while at Cork City before joining PNE, it was a dream come true for the striker who had been thinking about pulling on the green shirt since he was a young boy.

"It's been a crazy couple of months since I came over to Preston to making my debut for the club and getting myself into the team and scoring a couple of goals at Championship level in front of big crowds and now finally getting my first international cap in front of a massive home crowd. 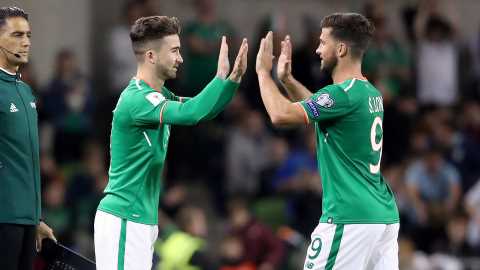 "To hear the crowd sing my name before I was even warming up, I was just sitting on the bench, it was something you dream of and to step onto the pitch and hear the roar of the crowd and soak up the atmosphere was something I have been dreaming of since I started playing football. To put on that jersey with your name on the back, it's hard to put it into words. The adrenaline is still pumping through my body thinking about what actually happened last night but it's the proudest moment in my footballing career to date.

"It was brilliant, all the boys were on the bench and you could hear the crowd singing my name and it was a surreal experience to hear the Irish crowd sing my name.

"It means a lot, it shows how far I've gone from the start of the season, scoring a lot of goals for Cork City, I could never have imagined by October I would be a senior international making my debut in a World Cup qualifier.

"I have worked hard to get here and long may it continue, I've got a taste of international football now and I'm just hungry to keep going from here and crack on and get plenty more caps. "

His dream of making his debut was made even more special as he replaced a player he had always looked up to in Shane Long, and Maguire is hoping the pair can strike up a partnership at international level in the future.

"It was amazing, when I was playing at Cork I knew he had played there and the amount of goals he's scored and what he's achieved in his career to date. He's a player I've always compared myself to in every way, he looks to play in behind and he look to come short and link up play as well, his work rate is second to none and he's a goalscorer and a player I've always looked up to since a young age.

"To actually come onto the pitch for him was probably the perfect scenario. Obviously I would love to share the pitch with him but there's still plenty of time for that and hopefully I can kick on and hopefully create a good partnership with him.

"He's been brilliant with me since I came in on Monday, he's been asking how I'm getting on and giving me a few tips so long may it continue."

After receiving his first call up, the 23-year-old was looking forward to just being around the squad but was delighted to be able to make his debut in front of the home crowd at Aviva Stadium in Dublin.

"I wasn't really expected to come on but I was always focused and ready if I was going to get the chance to come on and show what I can do.

"We've only had a couple of training sessions but I had to show the manager what I could do and thankfully he's seem something in me either in training or the games he's seen that shows I can step up to international level and hopefully this is just the start of a long international career.

"During the game I was told to stay warm and that there was a chance for me to come on but I wasn't sure how long I was going to get, it was just a case of staying warm throughout the second half. I came on in the 82nd minute and looking back on it now its just a blur because the adrenaline running through my body from the moment I stepped onto the pitch in front of 50,000 fans at Aviva Stadium.

"Coming here I was just looking forward to the experience of being in the dressing room and around the hotel and around these calibre of players that are playing week in, week out in the Premier League and players I have already played against in the Championship this season.

"It was about getting in and getting used to playing with the boys and getting to know them but to get a feel of the pitch last night and to get some game time, I will now be looking to be involved again on Monday."

Next up for Maguire and the Irish is a trip to Cardiff to face Wales in a crucial match, with both teams still in with a chance of winning the group or at least making the play-off so it's all to play for on Monday night.

On that upcoming game, the former Cork City man continued:

"It's pretty much a cup final, obviously Wales are going to set out not to lose but we have to go there and get the three points and put us in a strong position to make the play-offs.

"The job was to get the three points last night no matter what and now we are fully focused and hopefully there will be a big crowd from Ireland. There's no doubt they will travel in their thousands and as I say, it's going to be like a cup final, we need to go there and win and we will be looking to do that.

"Hopefully I will get another couple of minutes but no matter what happens, we just need to get those three points."