Fresh from his debut on Friday in the 2-0 win at home to Moldova, Sean Maguire will be hoping to feature against the Welsh as both sides battle to keep their World Cup dreams alive. 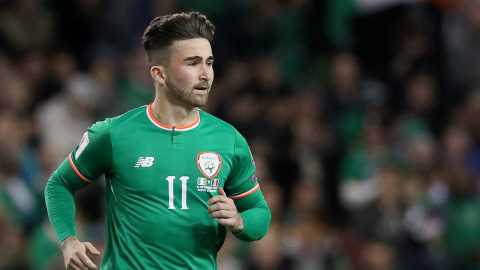 Alongside Maguire in the Ireland squad is PNE winger Daryl Horgan, with North End 'keeper Chris Maxwell in the Wales camp.

Maxwell was an unused substitute in the 1-0 win over Georgia on Friday, and with wins for both sides at the weekend, it's all to play for in Cardiff on Monday night.

A win would secure a least a play-off place for either side with just one point separating them going into the game, with even a draw enough for Chris Coleman's Wales.

There is still a chance for either side to top Group D, but that will depend on group leaders Serbia's result against Georgia.

Speaking ahead of the game, PNE and Republic of Ireland striker Sean Maguire said:

"It's pretty much a cup final, obviously Wales are going to set out not to lose but we have to go there and get the three points and put us in a strong position to make the play-offs.

"The job was to get the three points [against Moldova] no matter what and now we are fully focused and hopefully there will be a big crowd from Ireland. There's no doubt they will travel in their thousands and as I say, it's going to be like a cup final, we need to go there and win and we will be looking to do that.

"Hopefully I will get another couple of minutes but no matter what happens, we just need to get those three points."