Aston Villa can lay claim to being the founders of the Football League, through the pioneering work of their Scottish chairman William McGregor, who first suggested the idea of a league to the major clubs of the late 1880s.

North End and Villa were no strangers to each other before that inaugural season of 1888/89, having met in numerous friendlies, as well as the FA Cup in 1887/88.

In all we have faced each other precisely 50 times here in league matches here at Deepdale. Goals from Ben Pearson and Jordan Hugill, together with an injury time penalty save from Chris Maxwell, giving us the points in the most recent encounter last season.

Back in that first season, Villa were the only team to deny us a home win with a 1-1 draw in November and they ended up as runners-up, although 11 point behind us. Since then, we have won twice as many games as Villa (26 to 13) with 11 matches drawn, but this is only the second league match between our two sides here at Deepdale in 43 years.

Prior to that, the record shows games that generally feature plenty of goals, with scorelines in our favour that include three wins by 4-1, one each by 4-2 and 4-3 and a 6-1 thumping of the Villans in 1920.

Villa have had two big victories here, the first of these when they began the first club to score five goals against us on a home league match, way back in 1894. They triumphed 5-2 in what was our 73rd home game in the Football League and won even more convincingly in 1899, this time by 5-0 as the power base in English football moved away from Preston.

Several players have appeared in both lilywhite and claret and blue shirts over the years, including Brian Godfrey, Brian Greenhalgh, Tony Morley, Tommy Thompson and of course most recently Sam Johnstone, Callum Robinson and Daniel Johnson. 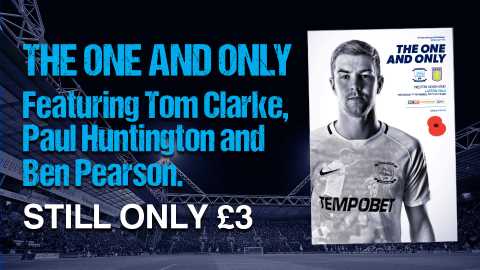 Bob McNeill experienced the lows and highs of football during this two seasons at Deepdale in the 1980s. He joined us in December 1985 as we sank to the bottom of the league and needed to apply for re-election, but the very next season he was part of John McGrath’s side that gained promotion back to the third tier. Bob is 55 on 1st November.

David Eyres made his North End debut 20 years ago on Wednesday, in a 1-0 home defeat by Plymouth Argyle. Eyresy went on to become a firm fans’ favourite over the next three years, playing 130 times and scoring 22 goals.

Back in 1975, we eventually lost a seven goal thriller by 4-3 to Hereford United. Despite goals from Ray Treacy and Mick Baxter, together with a Tony Morley penalty, The Bulls gained their only win at Deepdale in their second visit, but we also won two good games in the noughties on this date, both 3-0, against Derby County and Hull City respectively!