So what’s different this season at Deepdale? It was the first question – and admittedly a tough starting point – when we sat down with current skipper Paul Huntington at the Springfields training complex last week.

The No.23 is now in his sixth season with the Lilywhites, having surpassed 200 appearances for the club and has seen plenty of change since his arrival under the management of Graham Westley in the summer of 2012.

However, this year, there seems to be something emerging and developing that is fresh, new and exciting, so we asked the centre half to try and pinpoint what that was.

“I’d say there is a different – not expectation or drive – but our standards have gone up a notch and when we don’t hit them it is disappointing,” the 30-year-old told The One And Only.

“Overall the season has gone well so far, we know it can still get better in quite a few areas; we have made a solid start opposed to seasons gone past and we’re looking to keep improving. 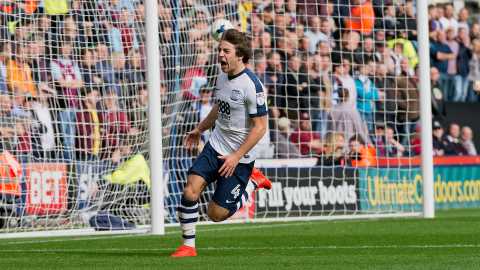 “The manager has spoken a lot this season about believing.

“When we go away from home we are going to win the game, not just shut up shop.

“The standards we’ve set each other this season have been very good and we expect, as always, nothing less than 100 per cent. We’ve been unlucky in some games; we could have had another good few points really; but we’ve been in every game, which is an important part of what we’ve been doing.”

In terms of the age of the current squad, Hunts is a senior professional – with almost 400 games under his belt, he could practically be called a veteran compared to the likes of Josh Earl and some of the young members of the side, however, he is far from near the end of his career and believes he can improve a lot under the new management structure.

It might have taken six years, but Hunts has also now got a song on the terraces! Popularly known by North End supporters as the ‘Cumbrian Cannavaro’, there is a song now to go with the nickname, which he admits being flattered by.

“A few people had told me about it and then I did hear it at Fulham. It’s really nice for me personally, I did have a chuckle to myself when it was going on, but I obviously appreciate it.

“The support again this season had been fantastic, home and away, we’ve really noticed a difference in atmosphere.

“We’ve had higher gates at home and that has not gone unnoticed and away from home the backing we have had has been second to none. As players we appreciate all the support because it really does drive us on, we can really feel the connection there between the players and the fans.

“It’s my sixth season now and I have enjoyed every one. They have all been very different. It is a great club and I love being here; you can never feel you are too young or too old to keep improving. I think there is a lot more to come from myself and the group we have got here, there is a lot of potential and I’m looking forward to the rest of the season.”

There is loads more from Hunts in a feature length interview in the matchday programme on Wednesday night. We also have interviews and features with Tom Clarke, Ben Pearson, Josh Earl and Josh Harrop is our latest to feature in our ‘If I Wasn’t A Footballer...’ photo spread.

There’s all this and loads more in the 100 page edition of The One And Only on sale from Wednesday afternoon via the club’s Sir Tom Finney Stand ticket office and on the evening in and around the ground, all for just £3 a copy.