Chris Maxwell feels that the performances and character shown by the squad so far this campaign shows that they have high hopes for the season.

With just one defeat in the opening eight games of the season, confidence is unsurprisingly high in the dressing room at Deepdale, and the 27-year-old knows that if the squad continue to work hard together to reach their goal that anything is possible this season.

"The atmosphere in the camp is top drawer at the moment, everybody is working hard, everybody is doing the right thing and the performances on the pitch are showing that.

On trying to take the club forward, Maxwell continued: "As soon as one person doesn't strive for that then it's going to be a chink in our armour.

"You just have to look at the performances and the character that we've shown in certain games and it just shows that every single one of the lads is aiming for promotion.

"That stems straight from the top, from the owner, to the gaffer, through the staff and it filters down to us to do it on the pitch.

"It creates the environment where everybody is striving for the same thing, we are on a moving train and we are just going to keep progressing like we have done for numerous years. We are on an incline and it's important that we maintain that."

In the last outing, North End were backed by 1,700 vocal PNE fans at St Andrew's and the former Fleetwood Town 'keeper is hoping that more and more fans come out to back the team in the coming weeks.

"First and foremost the following for the game at Birmingham was incredible, 1,700 fans travelled to the game which was phenomenal for an away game. Being on the pitch, I am the closest to them at one end and furthest away from them in the second half and I could hear them constantly in that second half.

"I believe that the atmosphere that they created down that end of the pitch enabled us to push on in the second half and come away with all three points. 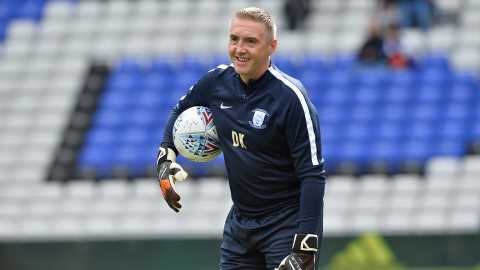 Maxwell has been in impressive form for North End, keeping five cleansheets in the first eight league games and feels he can improve further under new goalkeeper coach Dean Kiely, who joined the club on Friday.

"I imagine he will add something to my game as well which is only going to benefit me, benefit the team and benefit the club too.

"It's a close group of goalkeepers, with myself and the three others we are constantly together and constantly working side by side with each other, and it's important that we have a good working relationship as well as the main focus of enjoying ourselves on a daily basis and that only works towards a healthy attitude for a Saturday."

Hear more from Maxwell on iFollow PNE now by clicking on the video above.