It was a mixture of delight and relief for midfielder John Welsh after making his return to action after almost a year out.

The PNE No.19 has been side-lined through injury since October last year but made his comeback in the 1-1 draw with Barnsley on Saturday as a second half substitute.

The focus for Welsh now turns to competing for his place in the first team, and on his return, the 33-year-old told iFollow PNE: "It was just pure joy really, a little bit of relief but mainly just joy to get a shirt back on and get out there in a competitive game with the boys.

"Obviously I know the hard work starts now, I don't just want to come in and play one game and then that's it, I want to be continuously fit and continuously playing games and hopefully I can work my way into the manager's plans and into the first team.

"I want to break into the first team, the lads have been doing brilliantly, there's a couple of injuries so maybe there's a chance there may be a spot for me." 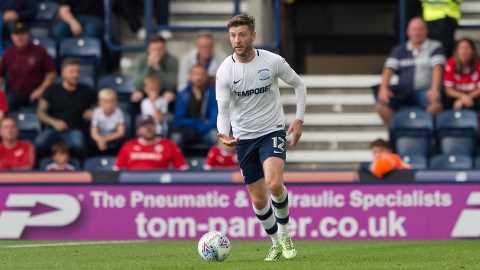 Gally Confident Ahead Of Cardiff Clash

The tough-tackling midfielder has had a couple of setbacks while on the road to recovery, and admits it was tough at times but feels the support from the dressing room and his family helped him through his rehabilitation.

"There were frustrating times when you're just coming back and then something goes things come into your mind and you start thinking about other things but lucky enough we have a great bunch of lads here, the staff are unbelievable so they are a big help.

"Obviously my family as well, everything coming together kept me focused on what I needed to do and getting bits and pieces from Jacko [Matt Jackson, physio] for changing things if need be and so I think it was a real collective effort from everyone around me.

Next up for North End is this evening's clash with Cardiff City at Deepdale, and despite the Welsh side flying high in the division, Welsh knows that any team visiting Deepdale is in for a tough match.

"When we are playing at home we fancy our chances against any team, we've had some good teams come here over the last couple of seasons and we've given them a really good game.

"So I think Cardiff can expect us to be confident going into the game, they've started really well but I think we've started well. The league probably doesn't show where we should be, that's the way football is, but once everything kicks into place, and knowing how we can play, I'm sure you'll start seeing goals going in and games being won."

Watch the full interview with John Welsh by clicking on the video above.