Alex Neil is confident his Preston North End side will be better for facing Swansea City in the coming weeks after suffering a narrow 1-0 loss at the Liberty Stadium.

North End took the game to a side who were in the Premier League last season, particularly in the second half, with new signing Lukas Nmecha among those close to netting an equaliser for a dominant Lilywhites outfit.

The gaffer was pleased to see his players play with an added belief following the half time interval and feels strongly that his team will make strides forward in further tests to follow in August. 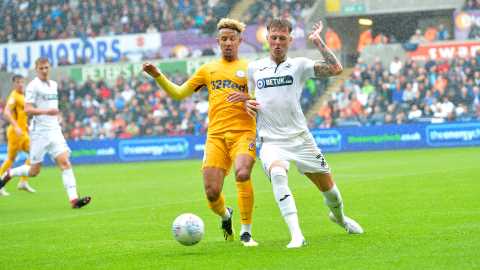 Robinson Aims To Build From Second Half Display

“Today’s game was much more a Premier League game than a Championship one, in terms of the way it was played,” Alex told iFollow PNE.

“There was a lot of football played and I think what we did is that we lacked a belief first half that we could actually move the ball as well as they could and beat them. That’s the challenge I set the players at half-time, was the fact that we looked as if we lacked belief.

“If you’re going to give up possession to a team that can move the ball, you’re going to find it extremely difficult. You’ve got two choices, you either sit in your own half and hope that they’re not good enough to break you down and try to counter, or you can go and believe in yourself, play against them and prove that you can move the ball as well as them.

“I think we did that second half and the disappointing thing was, for all the opportunities we did have, is we didn’t put them in the net. They were better first half but second half, we were much better. I think a point, albeit it’s difficult when you lose the game, was probably a fairer result but ultimately, we didn’t get anything.”

The North boss felt his side were probably due some good fortune in front of goal but explained that his players can take belief from narrowly being on the wrong side of the final scoreline.

“Sometimes you need a little bit of fortune but you also need to make them work, make sure you put enough pressure on them, enough good balls in, hit the target and that you’re moving the ball well enough to break them down.

“Unfortunately for us, we didn’t do that over the 90 minutes. It’s certainly a lesson learned for us I hope, and I’ve said that to the players after the game. I’m a bit disappointed and frustrated with them to a point because they shouldn’t lack belief, we move the ball now better than we’ve ever done. If anything, they should embrace that and show them [Swansea] how good they are.

“Once we had a chat at half-time – and tactically, we basically changed nothing – I just challenged them and said ‘Listen, I can get you back in and let them have it [the ball], or you go and show them what you can do,’ and they did that so that’s really frustrating.

“[There are] lots of lessons and I think what it did is show, certainly first half, is that our youth in the team showed. I thought we were a little bit naïve in our play and we lacked that belief you would have with an experienced pro. But I fully expect us to become better.”

Watch the full post-match interview with the gaffer now by clicking on the video above.