Academy manager Nick Harrison has taken plenty of positives from the first couple of weeks of the youth team’s new season.

From the attacking prowess on the pitch, the young Lilywhites having scored in all seven of their pre-season friendlies and subsequent two league fixtures thus far, to players progressing with the first team off it, Harrison has been satisfied with how his young North End side have begun the campaign.

And speaking exclusively to the PNE Podcast, Harrison told of the youth set-up’s focus on producing exciting, attacking young players which has led to a number of goals already this term.

“We’ve got some young exciting players with plenty of creativity and intelligence on the ball. We strive to score goals and it’s important to do that to win games.

“As much as we don’t want to concede goals, football is about entertainment and we want to produce players who are exciting and can be positive on the ball and that’s what we have within the group this year.

“We had a really good pre-season, we’ve played against a number of Category One academies and we’ve scored goals against them. We scored two against Wigan who were up there in the league last year and four against Wrexham, so we will continue to work on that every day in training. 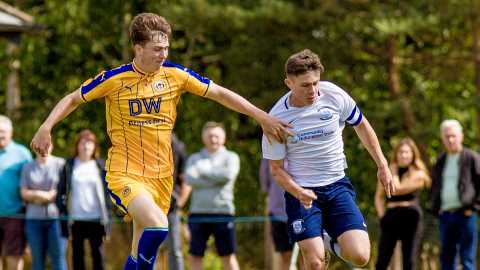 “We’ve got good technical players who are exciting on the ball and it’s fantastic that we’re putting the ball in the back of the net, so hopefully that can continue.”

Adam O’Reilly was on the bench for the first team’s Carabao Cup tie against Morecambe last week, the Irishman having played a full part in Alex Neil’s side pre-season campaign, alongside fellow midfielder Jack Baxter.

That second year pairing have also been joined by goalkeeper Jimmy Corcoran, a first year scholar, for a number of first team training sessions, Harrison stressing that that involvement within the first team environment is key for their development as players.

“That’s what we want to see [young players in the senior side] and that’s the whole idea of an Academy – to produce players who are capable of playing in the first team.

“It’s fantastic to see Ben Davies and Josh Earl in that group as well and the addition of Adam O’Reilly and Jack Baxter is brilliant.

“We saw Adam on the bench for the first team against Morecambe last week so it certainly shows that there’s a pathway there for the players, but the players have got to be good enough.

“Adam and Jack have certainly shown that, having come in as first year scholars last year, they can compete at our level and go beyond that, too. Hopefully they keep working hard, keep developing and break into the first team at some point."

Hear more from Nick by listening to the latest episode of the official club podcast, which is available here through iTunes and via Soundcloud here.