Adam O’Reilly, Charlie Lyons, Ethan Walker and Jack Baxter were all on target in the youth team’s 4-2 win against Wrexham.

O’Reilly and Lyons netted to make it 2-0 at the end of a comfortable first half, but the Lilywhites were reduced to ten men just after the half hour when Tyrhys Dolan was sent off.

Cameron McGregor scored a brace for the visitors after the interval but his efforts were cancelled out by direct free-kicks from Walker and Baxter. 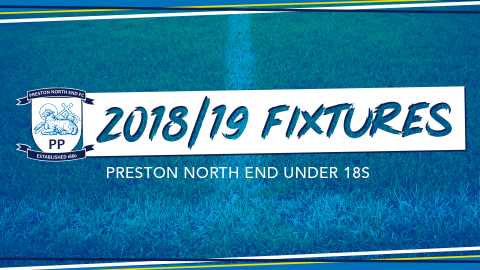 North End were the dominant side throughout and that was evident straightaway, as the lively Walker flashed a low delivery across the box, Darren Brannigan just unable to meet it, the former also having efforts from a free-kick and header going wide inside the opening five minutes.

O’Reilly latched onto a loose ball with a quarter of an hour on the clock, following another Walker corner, connecting well enough but striking over.

Walker was first to hit the target a minute later after Brannigan regained possession and held it up brilliantly before teeing up his team-mate, goalkeeper Max Williams pushing his low shot wide and then denying O’Reilly from similar range.

Lyons probably had North End’s best chance just before the half hour when he met Walker’s corner at the back post but headed marginally wide, but the hosts soon got took an overdue lead.

It was in the 32nd minute that Jerome Jolly, who had won the ball back initially to kickstart the move, beat his man down the right and squared it for O’Reilly to finish confidently at the near post.

The Lilywhites had the goal advantage but in the following minute, Wrexham had the upper hand in terms of bodies, after Dolan saw red for an off the ball incident, having won PNE a free-kick.

That did not affect the hosts’ control of the game, though, Brannigan having a goal disallowed for offside after O’Reilly’s shot had been deflected into his path.

Wrexham’s first effort five minutes before the break saw Bobby Beaumont glance a header over but the majority of the chances continued to fall the hosts’ way, Lyons taking one of those just before half-time.

It came from another Jolly cross, this time a free-kick from deep on the right, which perfectly picked out the Irishman to side foot into the bottom corner after 44 minutes.

The visitors saw much more of the ball in the opening stages of the second half and they made that possession count in the 49th minute. It was the first of three successful free-kicks after the interval, McGregor curling over the wall and into the bottom left corner.

The Lilywhites were so close to restoring their two-goal lead on the hour after Baxter and Walker both saw their efforts blocked, the ball falling on the volley for Brannigan, whose instinctive effort skimmed the crossbar on its way over.

Wrexham were just as close seven minutes later when a corner was cleared to the edge of the box, the midfielder’s first time effort heading for the bottom corner but for PNE clearing off the line.

Walker’s 76th minute free-kick then brought about an entertaining final quarter of the game.

After the North End men had curled in for 3-1, with the help of the inside of the post and a touch off Williams in the Wrexham goal, McGregor struck again for his and his team’s second after 84 minutes.

Beaumont played the pass through for McGregor down the left side of the area, his first time strike finding the far bottom corner.

Any concern of the visitors mounting a comeback was shut down almost immediately, however, as Baxter rifled a 20-yard free-kick under the wall and into the bottom left corner with three minutes of normal time remaining.

Brian McManus might have extended the lead in stoppage time, drawing a fine close range save from Williams, but the Lilywhites had already done more than enough for their victory.